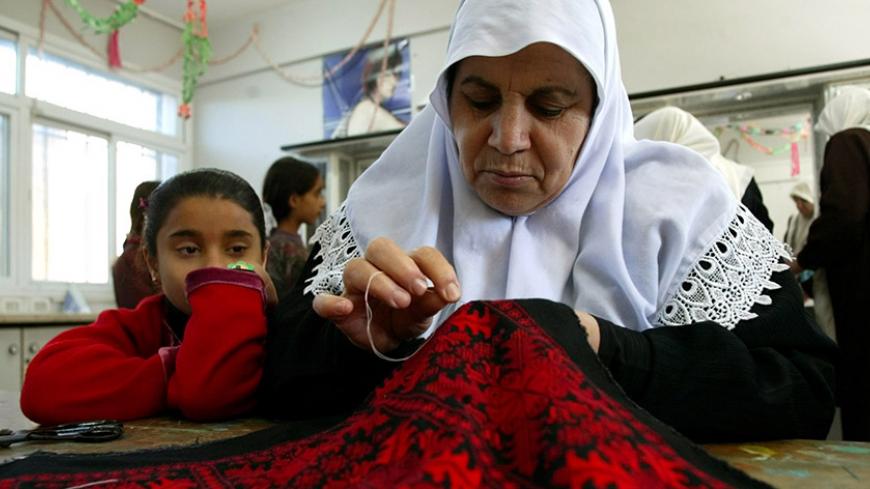 A Palestinian woman is watched by a young girl as she embroiders in a women's center, where courses are offered in embroidery, hairdressing and IT skills in Gaza City, Jan. 5, 2003. -

However, Um Yasmine does not own a single piece of embroidery. She does not own an embroidered dress, shawl or bag, and has never even thought about it. She is more concerned about satisfying the daily needs of her unemployed husband and unemployed daughter.

As she smiles shyly, Um Yasmine said, “Frankly, I have no embroidered pieces to wear because such pieces are costly, and I buy yarn and cloth to make embroideries for others. I make about $50 a month.”

The economic situation has been very bad, she said, following the closure of the crossings. No visitors or tourists are coming to buy embroidered pieces anymore, and institutions are no longer able to market their products outside Gaza.

Twenty years of embroidering shawls has taken a toll on Um Yasmine's sight, so she now wears eyeglasses. However, she was able to send her only daughter, Yasmine, to nursing school. Yasmine graduated in 2013. She is currently volunteering in a hospital and does not have any income.

“It is this thread and this needle that paid the tuition fees of my daughter and that provide for my family,” Um Yasmine said.

In the center of Gaza City, on Omar Mukhtar Street, four main shops sell embroidered pieces, but they attract a very narrow clientele. Embroidered goods are costly; the average price of an embroidered dress is $200.

The Arabesque shop is full of dresses embroidered using the rural method. Surrounded by red, blue and yellow dresses, the store owner, Um Mohammed Abu Rabih, chatted with Etaf al-Noumnoum, who was trying to sell her latest piece of embroidery: a headband.

Um Mohammed explained that whenever she gets a request for a particular dress, cloak or bag, she calls one of the embroiderers, and they agree on a price and time of delivery. She then gives them the necessary fabric and yarn.

“Six years ago, I learned embroidery all by myself, and it has been my main profession ever since. Believe it or not, with the little money that I make I provide for my parents and five siblings,” Noumnoum, 30, told Al-Monitor, as she returned the embroidered headband to her plastic bag.

Noumnoum and the shop owner both confirmed that the economic situation has degenerated to its worst as far as embroidery is concerned. One wonders who would buy embroidered pieces when everyone is suffering from the economic crisis. Most people are still trying to reconstruct their homes after their destruction in the war. Clients are no longer visiting from all over the world after the closure of border crossings, and foreign marketing has come to a standstill.

During the discussion, a woman named Um Ali, 32, entered the shop and asked whether the embroidered dress she had requested for her cousin's wedding was ready.

“I love embroidered dresses, and I come from Khan Yunis to have them embroidered in Gaza [a 45-minute drive]. My grandmother has a dress from the city ​​of Jaffa, which she migrated wearing in 1948, but she refuses to lend it to me out of fear I would ruin it,” said Um Ali.

Embroidered Palestinian dresses are some of the only surviving legacies of Palestinian villages occupied by Israel in 1948. Clothing from each village has its own design, with a different form, color and distribution of embroidery patterns. But Palestinian embroidery existed long before. According to a study by An-Najah National University, the first pieces of Palestinian embroidery date back to the Stone Age, i.e., 4000 BC in the Hadera area and Lower Galilee. At the time, mural paintings were reproduced and embroidered on clothing and footwear, as in the Canaanite era.

Amid the harsh economic times and the relative seclusion of the Gaza Strip, women embroiderers have had to use innovative ways to promote their talent and market their products. Social media presented itself as the most accessible means.

Sabreen Abu Dawabah, 31, who took a specialized embroidery training course in her hometown of Deir al-Balah in central Gaza Strip and mastered the profession, started marketing her embroidered pieces, bags and shoes on Facebook around a year ago. 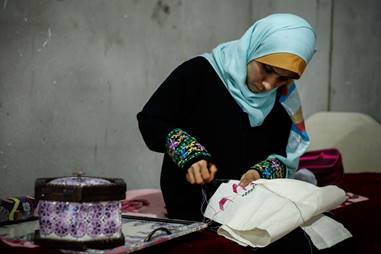 A Gaza woman works on a piece of embroidery inside her home in al-Shati refugee camp, April 21, 2015. (Photo by: Motaz Alaaraj)

“A lot of people send me requests through my website, and I have received some from the West Bank, the US and Qatar. Unfortunately, though, I cannot deliver most of these embroideries, especially since the crossings are closed,” Sabreen said.

Sabreen told Al-Monitor that she works meticulously, as if she were designing pieces for herself. Embroidery is a hobby for her, not an economic need. She said she visits women who can embroider in her region and has them complete the embroideries. “It’s like a scattered workshop,” she said.

The women interviewed for this article all agreed that one piece of yarn measures about 30 meters (98 feet) and needs a day and a half of work, and this barely covers a limited part of ​​the dress. The first step is to choose the fabric of the dress, knowing that there are ordinary and luxurious types of cotton. Also, the dress design has to be in accordance with the Palestinian village and has to cater to the choice of the client, who may also opt for a modern model.

The Women's Affairs Center organizes the largest exhibition of embroidery products every March, in celebration of International Women's Day.

The center's director, Amal Syam, told Al-Monitor that 40 people participated in the last exhibition, including five institutions. The rest were women providing for their families and suffering from bad economic situations. She said the center encourages individual work.

Syam explained that some women wait an entire year for an exhibition, which lasts several days, in order to sell their products.

“The small businesses section at the center supports these women by giving them refundable grants worth $1,500 each to be settled within one year from the date of sale of their embroidered pieces,” she said.

“The center has been interested in embroidery for 15 years, and it continues to train women to master and market embroidery,” she added.

Um Yasmine goes out at the beginning of each week to market her embroidered pieces in Gaza City. Oftentimes, she only sells her work to two or three shops. Occasionally, she has to wait a long while before the shop owners make up their mind whether to purchase her items. She spends her time imagining herself wearing one of these embroidered cloaks — her own — on display in the shop windows.

by Murielle KASPRZAK and Joseph SCHMID | AFP | May 26, 2022
END_OF_DOCUMENT_TOKEN_TO_BE_REPLACED