Political uncertainty and conflict with the PKK are taking their toll on the Turkish economy, with the number and value of bounced checks on the rise, threatening company bankruptcies and fresh woes in the banking sector. 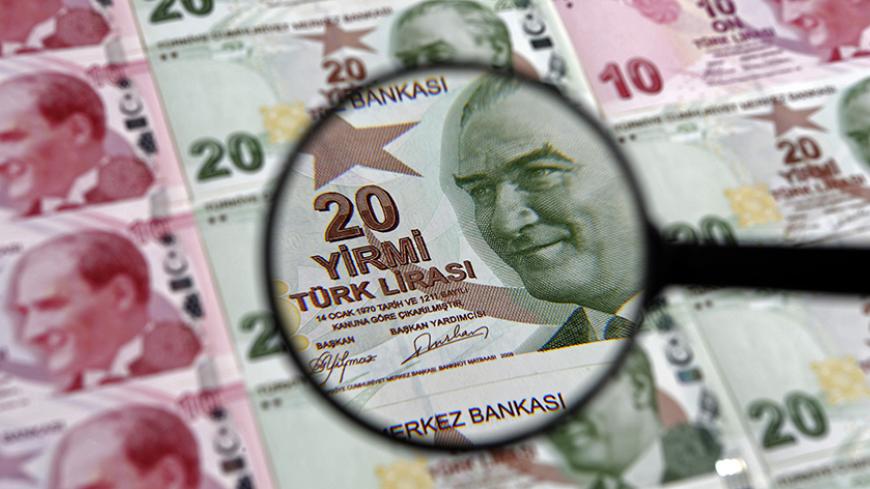 A 20 lira banknote is seen through a magnifying lens in this illustration picture taken in Istanbul, Jan. 28, 2014. - REUTERS/Murad Sezer

The deterioration in Turkey’s real economy is accelerating, with political uncertainty, early elections and bloody conflict with Kurdish militants taking their toll on the economy in general. Statistics by the Banks Association of Turkey Risk Center show a dramatic increase in both the number and value of bounced checks, especially in August, when the Kurdistan Workers Party stepped up its terror attacks. The problem seems to be particularly rife in the predominantly Kurdish provinces in the east and southeast, where since August 2014 the number and value of bounced checks increased by up to 115%, well above the national average, with local economies struggling amid the simmering unrest.

The regional breakdown for August indicates how political uncertainty and the rekindled Kurdish conflict have put a serious strain on businesses across Turkey, including the country’s economic powerhouses in the west. In the southeast, the trend is even gloomier. In August, five southeastern provinces topped the list of regions with the worst rate of bounced checks in terms of value. The rate was the highest in Bitlis and Bingol, at 11.1%, followed by Van at 10.6%, Hakkari at 9.3% and Mardin at 8.4%.

A 2012 legal amendment lifted the jail sentences faced by issuers of bad checks since 1985. The new law only bans offenders from issuing checks for at least three years, should they become the subject of an official complaint. Banks, on the other hand, were handed more obligation to deter fraud, including a payment guarantee of 10,000 Turkish lira for each check leaf of more than 10,000 Turkish lira. Thus, the soaring number of bounced checks is now increasing the financial burden of the banks.

All these figures of swelling bad debt illustrate how fast the woes of the Turkish economy are spreading, harming the income and repayment capacity of individuals, enterprises and companies alike. The increase in bounced checks, both in number and value, is bound to have a particularly damaging impact on trade and exports, with many companies likely to go bankrupt as a result.

The hardships in the banking sector, too, are growing. Banks have already taken a hit from the dramatic depreciation of the Turkish lira this year, significantly swelling their foreign currency debt. Unpaid loans and bouncing checks are only adding to their burden.