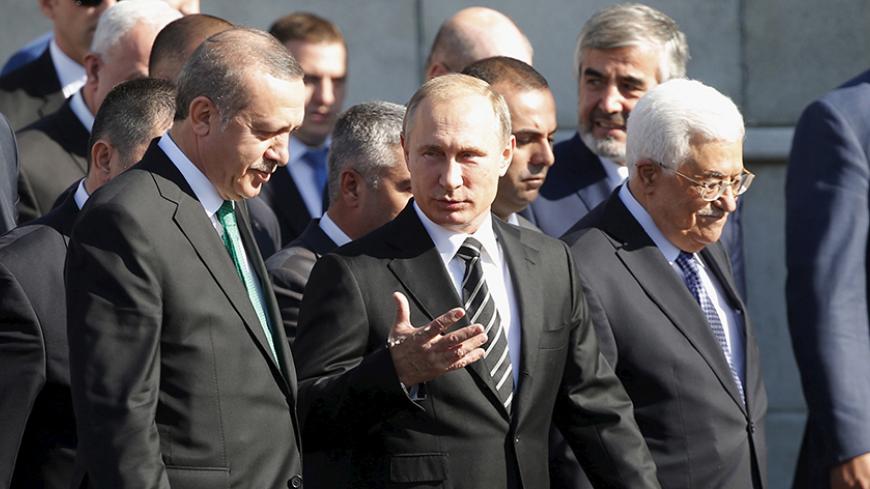 Turkey may be seriously at odds with Russia over Syria and silently fuming because of Moscow’s decision to increase its military assistance to the Syrian regime, but Ankara is treading cautiously to avoid tensions that would endanger its vast economic and energy interests with its northern neighbor.

This became apparent once again during President Recep Tayyip Erdogan’s one-day visit to Moscow on Sept. 23 for the inauguration of the reconstructed central mosque, officially named the Moscow Cathedral Mosque, ahead of the Muslim Eid al-Adha (Feast of the Sacrifice) holiday.

After the visit, Erdogan hinted at a change in Ankara’s Syria policy that is a little more in line with Moscow’s position, which the United States has also shown signs of inching toward in recent days.

Despite major disagreements between the two countries on regional issues, Erdogan did not hold back from lavishing praise on Russia during his speech at the ceremony for the mosque, which was also attended by Palestinian leader Mahmoud Abbas and Kazakhstan President Nursultan Nazarbayev.

“I am sure that the opening of the mosque at a time when we need humanity will contribute to establishing peace in the world. Russia is a good example for coexistence of people of different faiths,” he said.

These remarks contrast sharply with the widespread view in Ankara government circles that Russia’s backing of Assad is the main factor that has made this crisis intractable.

Russia for its part believes it is the interventions of countries like Turkey, and their support for Islamist groups in Syria that Moscow considers to be terrorist organizations, that has brought the crisis to where it stands today.

Nevertheless, Putin was also careful to be diplomatically correct during the inauguration ceremony and thanked “fraternal countries Turkey and Kazakhstan for the reconstruction of the mosque,” which reportedly cost an estimated $170 million.

While noting these diplomatic niceties, the news media was interested more in what Erdogan and Putin discussed about Syria behind closed doors in Moscow. The official Kremlin statement revealed nothing in this respect, merely highlighting the general remarks of the two leaders in front of cameras before their talks.

“As far as our bilateral relations are concerned, we are very happy with their development. We continue our regular contacts at the top level, in all areas, through our parliaments and our contacts at the government level,” Putin said. Russia remains Turkey’s second-biggest trade and economic partner.

“Our trade and economic ties continue to diversify, which makes us very happy,” Putin added. He concluded his remarks by indicating that his meeting with Erdogan also provided an “opportunity to discuss our bilateral relations and issues on the international agenda.”

The statement also cited Erdogan’s remarks in which he said that Turkish-Russian bilateral relations had reached “a very good basic level” over the last 10 years, and added that their goal was to reach $100 billion in bilateral trade by 2023.

The Kremlin’s statement, which was issued after the talks between the two leaders, offered no sign of what had been said concerning political issues relating to the region.

Erdogan was more forthcoming on this the next day, after his Eid al-Adha prayers in Istanbul, when he answered reporters' questions.

Asked about his meeting with Putin, Erdogan said they discussed Syria briefly. “To be frank, I still don’t see any clarity in Russia’s stance on Syria,” he said. His remarks appeared to fly in the face of recent statements by Russian Foreign Minister Sergey Lavrov in which he clearly repeated Moscow’s well-known position on the topic.

“But we decided to at least start a new initiative on the matter. We have the UN General Assembly up ahead. We agreed that the US, Russian and Turkish foreign ministers should engage in a triple initiative during the General Assembly,” Erdogan said without going into details.

“According to the results we obtain from this, and provided they accept this process, we want to include Saudi Arabia and Iran in it. We can carry it forward later with the inclusion of the European Union, and countries such as Jordan and Qatar.”

Western diplomats contacted by Al-Monitor indicated that they are not aware of such an initiative, and hoped to be filled in by Moscow and Ankara about it, given the important scope of Erdogan’s remarks.

A diplomat who wished to remain anonymous due to his sensitive position, however, appeared skeptical. “(Erdogan’s) remarks, which suggest Turkey is back as a major player in this dispute, appear to be directed more at a domestic audience than a foreign one. But we will keep an open mind. The coming days will reveal the truth of the matter,” he said.

Responding to another question, Erdogan said the support Russia and Iran were giving the Syrian regime was no secret. “Our hope is that Russia fulfills the requirements of our meeting yesterday. I told them yesterday. Assad wants to establish a boutique Syria that begins in Damascus and takes in Homs and Latakia, which represents 15% of Syria,” he said, not providing details about the “requirements” Moscow has to “fulfill.”

“What [Assad] wants is to establish a state for himself in this region that is supported by some sovereign powers,” Erdogan added without naming the “sovereign powers.” Erdogan also repeated Ankara’s call for a safe zone in northern Syria, which he said would be for the 2 million Syrian refugees currently in Turkey. Russia is opposed to such zone, saying it would violate Syrian sovereignty.

It was Erdogan’s remarks about Assad, however, that perked up diplomatic ears. “We can have a process without Assad, or something like going with Assad during a transition period,” he said in response to another question, although underlining that no one saw a future for Assad in Syria.

These words of Erdogan’s have left many diplomats wondering whether Ankara is on the verge of changing its position on Assad, which it has clung to from the start — that is, that Assad cannot be part of any Syrian settlement.

If so, this would signal that Ankara is trying to come more in line with Moscow and Washington, seeing that Turkey’s insistence on its current Syria policy has brought few, if any, results.

The diplomat who spoke with Al-Monitor, however, indicated more concrete evidence would be needed before a conclusion could be drawn that Turkey is on the verge of revising its Syria policy.