It's difficult to tell how involved Russia plans to become in fighting terrorism in the Middle East, let alone how it might approach such an undertaking. 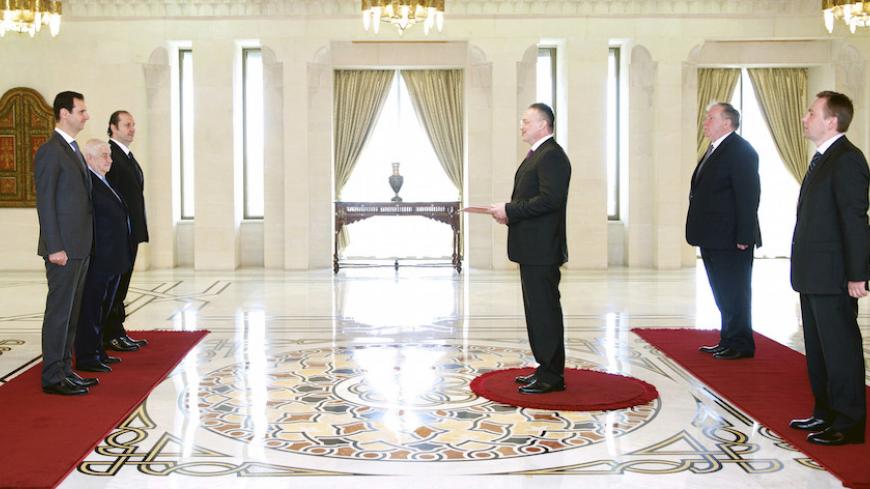 Russia's increased aid to Syria remains the center of attention among experts and the world media, where rumors of a possible "Russian intervention" have begun circulating. Russian officials deny them, calling them speculation, but they often give evasive answers on the subject. At the same time, Moscow has emphasized that on the Syrian conflict, it will keep operating on two parallel tracks: actively opposing terrorist groups — primarily the Islamic State — and continuing the political process toward a diplomatic solution to the conflict.

The additional support has to be understood within the framework of the first track: President Vladimir Putin has been calling for a united front to fight terrorism. At a Sept. 22 press conference in Moscow, Iranian Deputy Foreign Minister Hossein-Amir Abdollahian said Tehran welcomes the Russian president's proposal.

But what will happen next? Given the ambiguity of the current situation, one can only suggest a few hypothetical scenarios.

Russia doesn’t directly engage in the conflict either by land or air and limits itself to providing military/technical aid and advice to Damascus, including the development of Russia's naval base on the west coast. This situation is quite plausible, but it is unlikely that IS could be defeated in this context.

Some Middle East analysts have opined that Russia’s main objective is to ensure the safety of a future Alawite state in western Syria in the event of the country’s partition, as Syrian President Bashar al-Assad is a member of the Alawite religious minority. The authors of Middle East Briefing write that one of the inevitable consequences of Russian intervention would be precisely that: the partition of Syria. Allegedly, "There are several indications that Russia is deploying its forces along the lines believed to be separating areas of strategic interest to Iran and the Assad regime [the western coastal region] from the rest of Syria. These are the lines where suggested UN forces could deploy in the future."

I am convinced that Russia isn’t preparing for such a scenario and that it will instead make every effort to help preserve Syria as a unified state.

At the request of the government in Damascus, Russia participates in hostilities against IS in cooperation with the Syrian Arab Army and volunteers from neighboring countries. There are two possibilities for implementing such a scenario. The first would be to launch rocket attacks and airstrikes with the direct participation of the Russian contingent in ground operations. This is unlikely, mainly because of the inevitable losses to the Russian military that would cause an extremely negative reaction among the Russian public. However, an analogy between this situation and the Soviet Union in Afghanistan that has been circulating in some regional media is inappropriate. In the Afghanistan situation, almost all states were against Moscow, while now many regional and global players have an interest in seeing Russia participate in the fight against IS.

The second possibility would be to launch rocket attacks and airstrikes on IS positions — and possibly those of other jihadist groups such as Jabhat al-Nusra — without boots on the ground, as the Americans say. In this case, only the Syrians and their regional allies would fight on the ground. This scenario is also rather risky, as it does not offer much chance of success. In both cases, at least some limited coordination with the forces of the US-led international coalition would be needed, at the bare minimum to prevent aerial vehicles from inadvertently colliding and to avoid accidentally striking each other’s positions. Putin and Israeli Prime Minister Benjamin Netanyahu addressed this very topic during recent talks in Moscow.

Russia joins the international coalition already operating in Syria. However, given the current state of relations between Russia and the United States — and the West in general — it is impossible to assume that Moscow would put its armed forces under US command (and Washington will never give up control). Besides, the US administration is unlikely to cooperate with Damascus unless we suggest the unthinkable, namely that Moscow would play the role of a bridge between them and facilitate the necessary level of cooperation. This scenario is totally unrealistic.

Russia creates a parallel coalition to the current one composed of Russia, Syria, Iraq and Iran, with the participation of volunteer troops from neighboring countries such as Lebanon, Afghanistan and Pakistan, but without getting involved in ground operations. This scenario is plausible, but in this way a full victory against IS seems hardly possible.

Russia forms a wider parallel coalition by joining forces with its main strategic ally, China. While this may sound like a fantasy, it would radically change the situation, and a whole set of circumstances speaks in its favor.

First, China has an interest in strengthening its presence in the region, not only in economic terms, as before, but also in the military and political sphere. Strong evidence for this idea is provided by the naval base Beijing is building on the Horn of Africa in Djibouti, where China plans to accommodate nearly 10,000 Chinese soldiers. Likewise, it plans to post units of elite Chinese counterterrorism forces — the Snow Leopard Commando Unit — in Iraq and Afghanistan, and there is already talk of their likely deployment in Syria. There is participation by 1,000 Chinese peacekeepers under the UN flag in Lebanon, another 1,000 in South Sudan and 500 in Mali. In Africa, it has long been rumored — yet never verified — that workers and employees on Chinese sites in several countries such as Sudan are in fact military personnel.

Second, there is Beijing’s growing concern about the threat posed by jihadist terror organizations, heightened after a Uighur terrorist group from China known as the Turkistan Islamic Party captured a Syrian air force base.

Third, there is the ever-growing military cooperation between Chinese and Russian armed forces on a bilateral basis and within the framework of the Shanghai Cooperation Organization. In this context, we can point to a series of military exercises in the region of Inner Mongolia. It is said that plans for the next such drill already involve not only Russia, but also new SCO members India and Pakistan. They, too, are interested in destroying IS and its "franchise" strategy, under which more and more terrorist groups are rising around the world. Will it be possible to include India and Pakistan in the fight against IS in Syria? And what if the SCO also accepts Egypt, which already has experience in joint military exercises with Russia and China and is also extremely concerned about the terrorist threat? In any event, one has to acknowledge that despite the SCO’s slow and difficult evolution, there are signs it is transforming into an organization with the characteristics of a political and military alliance.

Of course, China will have to consider some constraints. It has close ties with energy suppliers in the local market, primarily Saudi Arabia, which won’t like such a scenario. China has a difficult yet working relationship of cooperation and interdependence with the United States — and the United States is already extremely annoyed at China’s rapidly growing international activism. At the same time, there may be other considerations. Christina Lin, former director for China policy at the US Department of Defense, wrote in a blog post for The Times of Israel, "China and SCO’s entry into the war against [IS] would be a welcomed step in Washington."

If this scenario is really implemented, it will dramatically strengthen "Coalition 2" and its chances for a convincing victory over IS and other terrorist groups. For now, Al-Monitor has no concrete data on any noticeable preparation to create such a broad coalition, but circumstantial evidence gathered from Chinese diplomatic circles leads us to believe that the ground is being tested, at least.

The intrigue about Russia’s true intentions in Syria will obviously continue, at least until Putin’s Sept. 28 speech at the UN General Assembly. As befits the Russian president’s style, there may be surprises. According to Russian military affairs journalist Vladimir Gundarov, "No one knows what objectives the Kremlin has set [for] itself. The intrigue has reached such a climax that US Defense Secretary Ashton Carter has spoken with his Russian counterpart, Defense Minister Sergei Shoigu." Now everyone is expecting the start of negotiations between the military chiefs of the two countries, as suggested by the Kremlin.

Would a new anti-terrorism coalition — parallel to the existing one — operate with the participation of Russia? What would happen to the political process then, and how would relations between Russia and the "healthy Syrian opposition forces" develop?