Four lessons that Netanyahu must learn from his failed strategies

Throughout this past Jewish calendar year, Prime Minister Benjamin Netanyahu's strategic failures have rendered Israel more isolated in the diplomatic arena and more fragile in terms of deterrence, while the political echelon blames the media for it all. 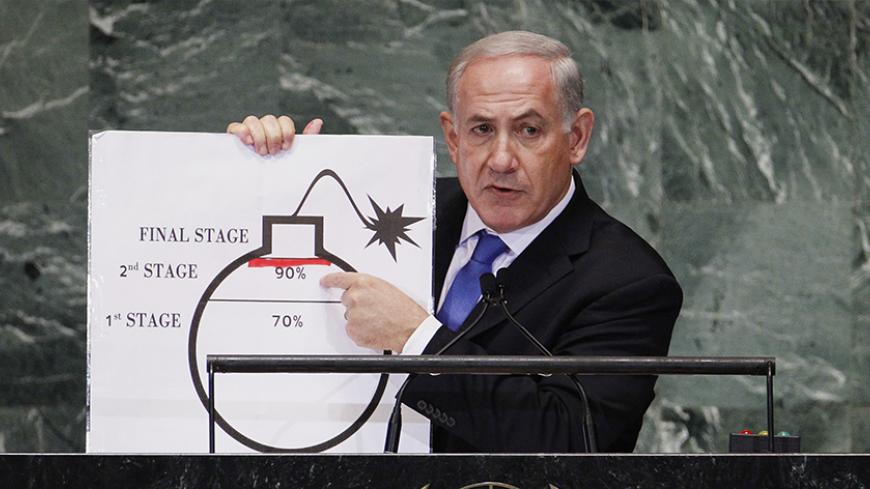 The year 5775 on the Jewish calendar will go on record as one of the toughest in the annals of the State of Israel, the year in which the world once again abandoned the Jewish nation to its fate. The leaders of the world’s greatest powers, led by the president of the United States, signed an agreement paving the way for an enemy state, one intent on the destruction of the Jewish state, to acquire an arsenal of mass destruction. The underwriter for this sad diagnosis and apocalyptic prognosis is Israel’s Prime Minister Benjamin Netanyahu.

The nuclear agreement and the lifting of sanctions against Iran are highly unlikely to enable it to manufacture a nuclear bomb, but the Vienna agreement signed on the 27th day of the Jewish month of Tamuz (July 14) is nonetheless marked on the calendar in bold letters as a black day for Israel’s defense and diplomacy strategy under Netanyahu’s leadership. This was one of the worst years ever for Israeli deterrence and international standing.

Netanyahu, however, looks poised to survive this double setback. After all, his political rivals, Zionist Camp leader Isaac Herzog and Yesh Atid head Yair Lapid, supported his fight against the agreement. Their criticism is limited to the manner in which he chose to try to derail it. The mistakes made on the nuclear issue, and strategic dereliction, cannot be rectified. As the new year dawns, there’s little else that can be done but to send the political leadership a gift basket of the lessons they should have learned so they might avoid the additional pitfalls of a vacuum in strategic thinking.

The first lesson is to never set out for the battlefield without an exit strategy. With that in mind, the diplomatic echelon must think at least two steps ahead, calculate its moves with the help of experts (for example, in the fields of risk management and game theory) and compute the diplomatic, defense and economic costs of defeat.

Yehezkel Dror, Israel Prize laureate for political science and a member of the Winograd Commission that examined the Second Lebanon War (2006), wrote that shortsightedness and lack of vision that result in damage to other countries can inflict far greater harm on Israel. “Israel cannot afford such stupidity,” stated the world-renowned expert. Had Netanyahu planned his moves properly for the eventuality of a “bad deal” with Iran being signed against Israel’s will, he might have saved Israel from the ensuing noisy clash with the leader of the free world.

The second lesson is the need to thoroughly examine the broad implications of every significant diplomatic and defense move in regard to the central goals of the state. These goals can easily be found in the “IDF Strategy,” issued in August by the office of the Israel Defense Forces' chief of staff. Lt. Gen. Gadi Eizenkot is aware that in Israel, any thinking on strategy always risks involvement in “political issues.” To manage this, the chief of staff based the “IDF Strategy” on another document, “The National Goals of the State of Israel,” completed in April 2006 by a committee headed by Dan Meridor, who served as minister of intelligence affairs from 2009 to 2013. The committee included the best minds in the areas of national security and intelligence.

The first section of this key document addresses “ensuring the survival of the State of Israel, defending its territorial integrity and the security of its citizens and residents.” The following section is on “preserving the values of the State of Israel and its character as a Jewish and democratic state and as the home of the Jewish people.” The third section concerns “ensuring the social and economic strength of the State of Israel,” and the final section speaks of “strengthening the international and regional standing of Israel while striving for peace with its neighbors.” It’s safe to assume that the authors were aware that striving for peace does not go hand in hand with control over the full territory of the West Bank and East Jerusalem. Had the nation’s captains been fully cognizant of these goals, especially the one relating to Israel’s international and regional standing, Israel might have avoided being pushed this past year into such dangerous isolation.

The third lesson is the need for the country’s leaders to shake off anachronistic perceptions, or in the words of Dror, the “pagan gods of thinking — thinking based in part on the past, which will never return.” Jettisoning such old-fashioned ideas as “victory,” “knockouts” and illusions of “easy victory from afar” are preconditions for creativity and flexibility, which are essential elements for finding diplomatic and security alternatives that take into account changing realities.

The fourth lesson is that the quality of a leader’s decisions is not determined by the amount of time and energy invested in public diplomacy and public relations. Up to the last minute and even after, Netanyahu tried to stave off an agreement with Iran. He traveled as far as New York, where he presented the UN General Assembly with a diagram of an Iranian bomb and drew a red line through it to symbolize halting Iran's nuclear program. The prime minister enlisted the support of the Republican Party in the United States, risking personal conflict with the Democratic president. The grades given to leaders are determined by their success in achieving the central, national tasks that they set for themselves and present to their people. Ovations in the US Congress are inconsequential when a leader fails to thwart a potentially severe blow, when so claimed, to the security of the state.

The decision-making process on the Iranian nuclear issue is no exception. Its superficial handling was the same as the handling of the natural gas issue. The political echelon shirks responsibility for the damage caused to the public interest. Instead of damage control and case analysis, the political leadership blames the opposition and the media. To this, one can add the panic over the controversial appointment of a national police chief and the chaos over public broadcasting reform.

Ring out the old year and the damage it wrought. Ring in the new year and its blessings.