The tiny state has gone from pariah to partner thanks to the Islamic State. 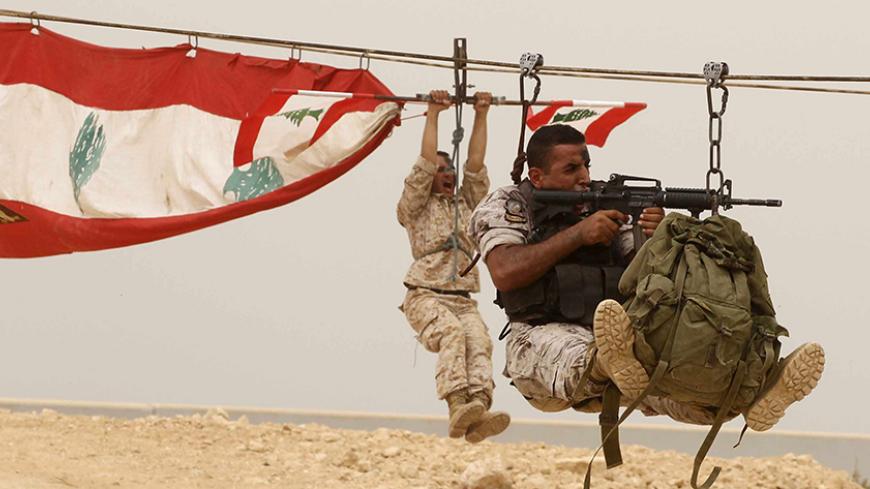 Members of the Lebanese army's airborne regiment perform a live drill, held as part of a weapons exhibition during the Security Middle East Show in Beirut, Sept. 9, 2015. - REUTERS/Mohamed Azakir

Tiny Lebanon is seeing its fortunes surge on Capitol Hill as fear of the Islamic State (IS) supplants any lingering concerns about Hezbollah.

Congress over the past year has approved more than $1 billion in proposed arms sales for the Lebanese armed forces, including attack aircraft and helicopters. And lawmakers on Sept. 29 cemented Beirut's status as a key ally with the release of a compromise annual defense bill that puts Lebanon on equal footing with longtime partner Jordan.

The free flow of aid and weapons represents a sea change from the situation five years ago, when Congress briefly held up all military aid following an incident in which Lebanese soldiers shot and killed an Israeli officer on the border. Hezbollah's political dominance over the following three years caused further hand-wringing on Capitol Hill, but over the past few months Lebanon's military has emerged as a trusted backstop against Islamist militants of all stripes.

“The mood in Congress is definitely much more positive than years ago regarding the security assistance to Lebanon," said Joseph Gebeily, president of the Lebanese Information Center, a Washington-based think tank. "There is an increased recognition by members of Congress, on both sides of the aisle, that it is important for US interests in Lebanon and the region.”

Gebeily credits the increased professionalization of the armed services, the emergence of a compromise governing coalition last year and the Lebanese armed forces' recent victories against IS. He said top Lebanese military commanders now regularly visit State Department and Defense Department officials in Washington, while US lawmakers in turn make it a habit to visit them during congressional delegations to Lebanon.

“If you look at the area," Gebeily said, "the only place really where local security forces or armed forces were able to completely eradicate [IS] and consorts from their territory was in Lebanon.”

Congress and the Obama administration have taken notice.

Over the past 12 months, the Pentagon has informed Congress about its intention to sell Lebanon $391 million in missiles, $180 million in helicopters and $462 million in Super Tucano turboprop attack aircraft. Congressional and administration sources say none of those sales have been blocked by Congress.

The aircraft sales would provide the Lebanese armed forces with close air support seen as crucial for strikes against IS militants along the border. Saudi Arabia is helping foot the bill through a $1 billion grant to Lebanon.

The aircraft and missile sales are only part of the picture, however. Just last week, for example, US Ambassador to Lebanon David Hale announced an additional $59 million for border security equipment for the army.

Meanwhile, the State Department is seeking to increase bilateral aid by 35%, to $211 million, in its proposed budget for the fiscal year that starts Oct. 1. While $80 million of that had been earmarked for support to the Lebanese armed services, seen as a nonsectarian alternative to Hezbollah’s armed brigades, the State Department announced Sept. 30 that it was doubling military support to the LAF to more than $150 million.

"We must do all we can to strengthen Lebanon’s institutions, and most particularly, the Lebanese Armed Forces," Thomas Shannon, President Obama's nominee for the Number 3 post at the State Department, said at the third ministerial meeting of the International Support Group in New York. "The army is the sole institution with the legitimacy and mandate to defend the country and its people. It must have the equipment and training required to do that job."

The extra aid, he said, "will allow the Lebanese Armed Forces to buy munitions, improve close air support, sustain vehicles and aircraft, modernize airlift capacity, provide training to its soldiers, and add to the mobility of armored units."

That compromise represents a symbolic boost for Lebanon, which now finds itself associated with one of America's closest allies as the two face the brunt of the fallout from the civil war in Syria and the rise of IS. Lebanon has taken in almost 1.2 million Syrian refugees since the start of the war — one in five people living in Lebanon today is a Syrian refugee.

Despite the increased support for the Lebanese army, some lawmakers remain wary. Reps. Grace Meng, D-N.Y., and Mark Meadows, R-N.C., spearheaded a letter to UN Secretary-General Ban Ki-moon earlier this year taking the Lebanese military to task for its failure to prevent Hezbollah's retaliatory attack after Israel killed a senior Hezbollah commander and an Iranian general traveling in a Hezbollah convoy in the Syrian sector of the Golan Heights.

"It is incumbent upon the UN and the Lebanese Armed Forces … to ensure that Hezbollah, a terrorist organization dedicated to the destruction of Israel and its allies, does not continue to rearm and initiate violence against Israel," said the February letter.

Meadows, the author of anti-Hezbollah legislation that passed the House this year and last but has stalled in the Senate told Al-Monitor on Sept. 30 that his concerns persist. He said he and Meng never got a "meaningful response" from the UN.

"When you have Hezbollah that has infiltrated so much of Lebanese government, some say Lebanese military, we've got to be extremely cautious when we start looking at providing arms literally right there on the Syrian-Lebanese border," Meadows said. "I think this goes the opposite way of where we need to be going internationally, with so many stories of arms ending up in the hands of [IS] or al-Qaeda or whoever it may be. I think we need to take a lot more cautious approach."

One congressional staffer rejected the notion that lawmakers are particularly enamored with the Lebanese armed forces. Rather, the aide said, the proliferation of problems across the Middle East — IS, the Syrian civil war, Yemen, Libya, and so forth — simply means there's less bandwidth for lawmakers to weigh in on every arms sale.

Still, there's no denying the changing geopolitical landscape has prompted a rethink on Capitol Hill.

Former Rep. Howard Berman, D-Calif., who was chairman of the House Foreign Affairs Committee in 2010, led efforts to hold the aid back then. The following year, he introduced legislation along with three Lebanese-American colleagues — Reps. Darrell Issa, R-Calif., Charles Boustany, R-La., and Nick Rahall, D-W.Va. — to bar US military aid when Hezbollah rules the government.

"Because I am not privy to all the information I had access to in those days, [I] don't think I have much to contribute to your reporting," Berman told Al-Monitor via email, "except to agree that the world and the region has certainly changed.”

Editor's Note: This story was updated Thursday, Oct. 1 with new information from the State Department.