Amid slump in oil prices, Iran focuses on mining

Faced with a slump in oil prices, Iran turns to its vast mineral resources. 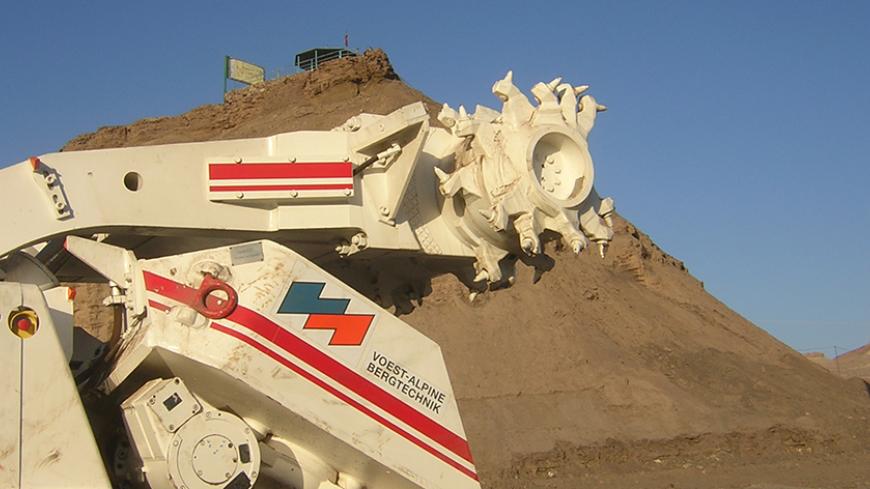 TEHRAN, Iran — A growing number of analysts and investors say the slowdown in China — the world’s second-largest oil consumer — and the expected stepping up of crude oil production in post-sanctions Iran are threatening already oversupplied energy markets.

For the Iranian government, which relies on petrodollars as a key source of income, falling oil prices resulted in a nearly $13 billion loss in revenues in the first seven months of 2015. To counter this dependency, President Hassan Rouhani has pledged — as has his predecessors — to develop the country’s tax system and expand non-oil exports. This approach enjoys the full backing of the Iranian leadership.

In a meeting with Rouhani and Cabinet members late last month, Supreme Leader Ayatollah Ali Khamenei suggested that the country’s significant potential in the mining sector should be realized as an alternative to oil. “The oil market, which falls from $100 to $40 following a sign from world powers and then actions by wicked elements in the region, is by no means reliable and we have to find an appropriate alternative. The mining sector is the best alternative,” Khamenei said.

While mostly known for its hydrocarbons, Iran is also among the world’s top 10 countries in terms of mineral resources. It has estimated mineral reserves of 60 billion metric tons, or 7% of that available on Earth. Of note, these minerals are diverse; more than 68 different types of minerals have been identified in Iran so far. These resources are reportedly worth up to $1 trillion. Yet, despite this huge wealth beneath the ground, mining only plays a minor role in the Iranian economy. According to Mohammad Reza Nematzadeh, the minister of industry, mines and trade, the mining sector accounted for just 1% of the country’s gross domestic product in the previous Iranian year (which ended on March 20, 2015). Nematzadeh said mining has the potential to triple its share of the Iranian economy.

However, Iran faces great challenges in its development of this industry. Experts say the country’s mining sector and related industry are not well developed and that a lot of work needs to be done. Koroush Azizi, an economic consultant who works with mining and who has years of experience working with major state companies, told Al-Monitor, “We need to have access to the latest mining technologies if we want to stop exporting raw materials. Selling raw materials deprives us from producing and exporting high-value-added products.”

Despite being among the most resource-rich countries on Earth, Iran is also one of the most underexplored. Less than one-tenth of its surface area has been fully surveyed so far. This has caught the attention of many foreign investors and global mining firms, such as Rio Tinto, which have visited Iran for talks with officials.

With sanctions set to come to an end soon, Iran’s Ministry of Industry, Mines and Trade has been taking steps to attract foreign investment for its projects. In August, Nematzadeh called for the drafting of a long-term strategy for mining in which the experience of other countries should be applied. He also called for a revision of the Iranian Mining Act to increase transparency and reduce investment risks. Separately, Nematzadeh’s deputy, Mehdi Karbasian — who is also the chairman of the Iranian Mines and Mining Industries Development and Renovation Organization — said his organization is seeking $29 billion in foreign investment for its projects.

Yet despite these measures, there are several factors that are likely to hinder the immediate development of mining in Iran.

First of all, the timing of the upcoming sanctions relief and expected inflow of foreign capital could not be worse. The global mining industry is in trouble, and a majority of mining firms are stuck in a bearish trend in the stock markets. In particular, the economic slowdown in China, a key mineral consumer, is impacting the industry around the world. The Chinese slowdown is directly hitting Iran, as China is the main importer of Iranian iron ore. Falling oil prices are also adding to the dilemma, with increasing pressure on the coal industry.

Despite this atmosphere, there are still hopes that Iran’s measures to increase the attractiveness of its projects may be fruitful. The Foreign Investment Promotion and Protection Act, which was passed in 2002, gives foreigners 100% ownership rights, residence visas valid for three years and the opportunity to transfer their profits out of the country in foreign currencies. It also offers a number of tax exemptions that, in some conditions, can rise to 100% of an enterprise’s profits. In an effort to reassure investors even further, the act guarantees that the government will pay compensation for any investments in projects that are nationalized or expropriated.

Efforts are also being made to cut the red tape. Companies need to go through a long and difficult process of obtaining multiple required permissions and licenses for mining and industrial activities. To address this issue, Hamid Reza Fouladgar, a member of parliament’s Industry and Mining Commission, told Al-Monitor, “Different measures have been taken in parliament to facilitate investments for both Iranians and foreigners.” He added, “The single window system is one of the measures that has been approved in parliament in which the investor will no longer need to refer to different government bodies to obtain licenses or permissions.”

Other than the steps the government and parliament have taken, experts like Azizi believe that Iran’s geostrategic location, which offers access to open waters and puts it right in the middle of the north-to-south and east-to-west trade corridors, gives the mining sector a unique opportunity to flourish.

Although Rouhani’s government is not the first to take measures to reduce the country’s dependency on oil, given the newly opened chapter in Iran’s relations with the world and the expected end of Western sanctions, it is highly anticipated that his government will have considerable success in achieving this long-sought goal. Whether mining will play a key role in this endeavor remains to be seen.