A group of blind youths recently received their yellow belts in karate after only 21 days of training, and their concerned club is hoping to get enough funding to help the children eventually reach Arab and international levels. 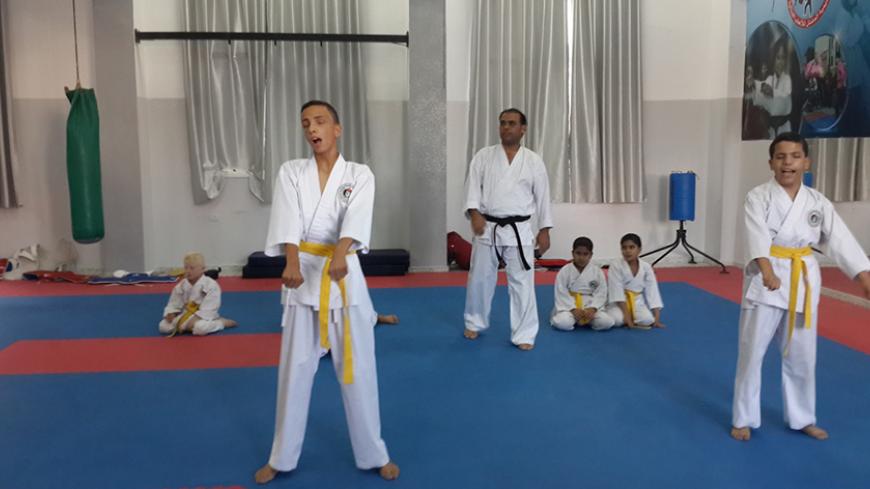 GAZA CITY, Gaza Strip — Mu’min Bitar moved his arm and leg upon hearing his trainer’s instructions. His moves were perfectly synchronized with those of his peer Mohamed Mahaty. Together, they put on a great show. The blind players have mastered their moves by relying on touch and hearing.

Mahaty, Bitar and six others make up the first karate team for the blind in Palestine. Despite the seven-year gap in their ages, their passion for the sport is obvious. They were introduced to the sport only recently, yet earned their yellow belts after a brief training period.

Bitar, 15, the oldest team member, told Al-Monitor, “I look forward to becoming a famous karate player and representing Palestine in Arab and international championships. I am determined enough to keep going until I get the black belt.”

Being able to defend oneself is a common goal for the eight team members, according to Bitar. He said the blind in particular do not get good jobs in Gaza and struggle intellectually and physically to gain their rights in a society that considers them disabled.

Mahaty was the most outspoken among his teammates. His family supports his efforts and doesn't want his blindness to keep him from integrating into society.

As he was grasping the chair to sit, Mahaty said karate has helped him change some negative personality traits: “I have become calmer, open to criticism and carefree about those who make fun of my appearance or who bully me for being blind.”

Hassan Raei, the Palestinian National Karate Team manager and director of Al-Mashtal Academy for Martial Arts, became a friend to the children after winning their trust. As a trainer, he said his goal is to invest in their potential, after feeling their intense desire to learn karate and master it in record time.

“Al-Mashtal club decided to examine the possibility of forming a karate team for the blind, and in order to achieve this goal, we communicated with Al-Nour School for the Blind and Visually Impaired Children in Gaza City, which nominated eight children,” Raei told Al-Monitor. “We have actually started with a training plan that was based on scientific research and study.”

This experiment is the first in Palestine and the Middle East, according to Raei. He relies on a sensory perception-based program to train them, emphasizing the senses of hearing and touch.

The training, which started July 26, lasted only 21 days, for one and a half hours a day. On Aug. 19, the children graduated with their yellow belts. The club administration dubbed them “Martyr Ali Dawabsha’s Team,” referring to the 18-month-old child who was killed in the July 31 firebombing of his home.

The team members managed to pass and master all exercises in a short period of time, Raei said. “The team for the blind proved that it deserves to wear the yellow belt after they passed the exercises successfully in 21 days, while their healthy peers needed three months to do so.”

Raei had planned to train more than three karate groups for the blind and then choose the best for the Palestinian team for the blind. However, he received a phone call from a player following the graduation ceremony that changed his mind.

“A player called me saying that he is fully confident that I will support him in pursuing the sports training stages until [he wears] the back belt, and fulfilling his dream of representing Palestine in Arab and international karate championships. He told me that [knowing] it was a far-fetched dream. Out of fear of losing my players’ trust — which took me effort and hard work to gain — I sent a request to Al-Mashtal’s board of directors to take the first karate team for the blind under [the club’s] wing, where I would be able to supervise their training to become the elite of the Palestinian team for the blind. My main goal now changed, and I want to channel my time, energy and expertise to train this team to be the best.”

Raei resorted to psychological debriefing techniques before training the team and noticed that the blind children carry a large burden. They fear losing their rights, which is why they said learning to defend themselves was the primary reason behind their desire to learn karate. During the training, each has become more confident about his physical and mental abilities, making the training easier.

When looking at the team for the first time, one does not notice the members are blind, as they confidently jump over barriers and between rings. Although their voices during the training were strong enough to scare their opponents, they were calm.

Al-Mashtal's contract with the Al-Nour School for the Blind will end soon, so the club is looking for a sponsor to provide the team with financial support.

“The players need special transportation to get to the club, not to mention the financial support that the team will need later on to buy the players’ clothing and equipment,” Raei said. “We are in dire need of a sponsor to help the team reach Arab and international championships.”