IS has big plans for gold currency

As the Islamic State challenges the US dollar by rolling out its own currency, some experts say the coinage will not catch on. 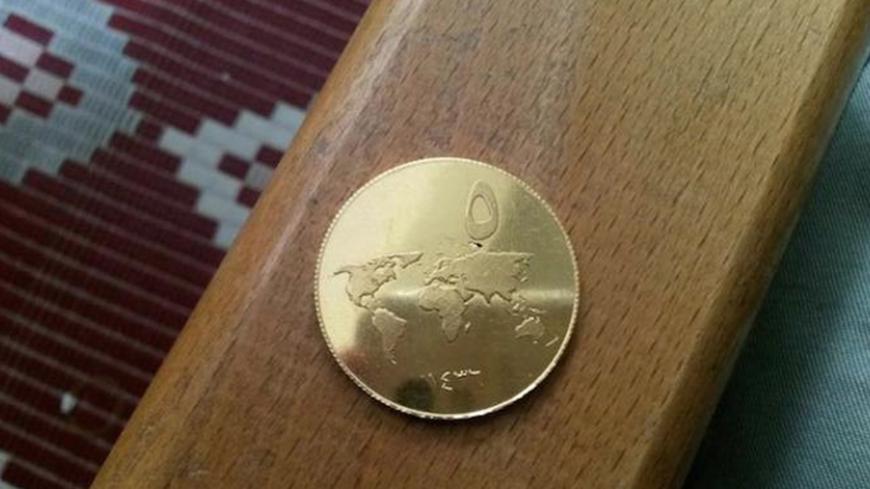 A gold 5-dinar coin released by the Islamic State is seen in this image, shared on Twitter by Syrian activist Abu Ibrahim Raqqawi. - Twitter/@raqqa_mcr

CAIRO — The Islamic State is declaring financial war on the United States.

Al-Hayat Media Center, which is affiliated with IS, recently broadcast a big-budget film titled “The Rise of the Caliphate: Return of the Gold Dinar.” In the film, aired Aug. 29, IS talks about destroying the US dollar by excluding it from international financial transactions and replacing it with gold, silver and copper.

Now, IS asserts that replacing the dollar with gold will push major powers such as China and Russia, who had bought US Treasury bills, to sell these bills, leading to a complete collapse of the US financial system.

Islamic thinker Najeh Ibrahim, a former jihadist in the ranks of the Islamist Gamaa Islamiya, told Al-Monitor, “The fact that IS is monetizing its currencies carries more than one message. The first message is addressed to the world, in which IS confirms that it has become a [legitimate] state. The second is addressed to Muslim youth, in which IS asserts that the Muslims’ dignity and economic power, lost since the era of the caliphate, have returned.”

Ibrahim pointed out that with every coined currency, IS plays on the psychology of its supporters. “Each coin has its own connotation. The first is a 1-dinar coin of pure gold weighing 4.25 grams [0.15 ounces], and this is the same weight as the first gold dinar of Umayyad Caliph Abd al-Malik ibn Marwan. On its reverse side, the 1-dinar coin has a symbol of seven wheat stalks, representing the blessing of spending in the path of Allah. The second coin is the 5-dinar coin and weighs 21.25 grams [0.75 ounces]; it is imprinted with a map of the world, representing the extent of territory [the Prophet] Muhammad's reign would reach.”

Ibrahim said, “There are economic, political and scientific relations between the countries [that cannot be overlooked]. To be recognized as a state, IS must be accepted by others. There are 192 countries in the world and none of them recognizes IS as a state, and therefore its currency will not be recognized.” He added, “Any currency must be accepted by the transaction parties. The holder of a currency must not feel threatened by using this currency. An Egyptian worker in Libya working in an area controlled by IS will not accept his salary in IS gold dinar, because he knows that he cannot transfer this amount to his children in Egypt. If this worker is caught carrying this dinar in Egypt, he may be subject to legal prosecution. People will not use this currency, even if [it is] made of gold.”

Ibrahim said Wilayat Sinai, which is affiliated with IS, probably will not use the currencies in Egypt. Wilayat Sinai has no real territory under its control, no nationals under its rule and no natural resources to export, unlike IS with its smuggled oil exports. On the other hand, if IS supporters from Wilayat Sinai receive their salaries in IS gold dinars, they will find it difficult to purchase their daily needs using this currency.

Fouad Shaker, secretary-general of the Union of Arab Banks, told Al-Monitor, “The issuance of currency in the modern era is based on the state’s macroeconomics and gross national product — the produced goods and services, not just metals. What IS did is very logical and reassures its salaried supporters, since at times of war nations will print money but there may not be a cash cover [at a later stage], which will reduce the purchasing value of those [paper] currencies.”

Finance Minister Fayyad Abdel Moneim, a former professor of Islamic economics at Al-Azhar University, told Al-Monitor, “There is no kind of prohibition of the use of banknotes in Islam, and the use of the gold coin has no impact on the US economy, whose gross domestic product exceeded $17 trillion dollars in 2014, equivalent to one-quarter of the whole world production.”

He said, “There is not enough gold to cover the world’s huge financial transactions, and IS’ hypothesis that the US dollar is weak is wrong, since it assesses the US dollar on the basis of gold only and not based on production.”