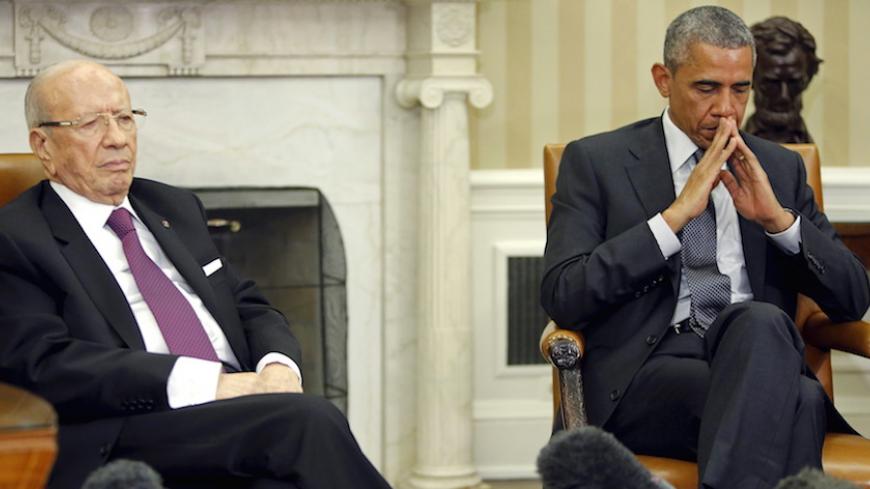 Tunisia's President Beji Caid Essebsi (L) and US President Barack Obama (R) deliver remarks to reporters after their meeting in the Oval Office at the White House in Washington, May 21, 2015. - REUTERS/Jonathan Ernst

A key congressional panel on Sept. 17 urged Tunisia to reform its troubled security services if it hopes to be recognized as a full-fledged democracy.

The House Foreign Affairs Committee's Middle East panel easily cleared a resolution to honor the Tunisian people for their democratic transition. Committee edits, however, reveal that the panel has a less rosy perspective than the Congressional Tunisia Caucus co-chairs who co-authored the original bill.

Instead of treating the democratic transition as a done deal, the revised bill states clearly that Tunisia isn't there yet. And while the changes can seem minimal, the underlying policy concerns are linked to millions of dollars in US assistance for a tiny country reeling from recent terrorist attacks.

"Today, the people of Tunisia are firmly going down the path toward democracy, as we have seen them reach multiple milestones," said panel Chairwoman Ileana Ros-Lehtinen, R-Fla. "We know that elections alone do not make a democracy, and that establishing true democracy is a long road. But today I am even more optimistic for Tunisia's democratic prospects."

She went on to urge the tiny North African country to "ensure respect for human rights and the rule of law, and implement democratic reforms."

"Of course, there are still so many hurdles to overcome," Ros-Lehtinen said. But with US help, Tunisia can become "the region's first full-fledged democracy" and the "shining example" for its neighbors to "emulate."

The nonbinding legislation was initially authored by Reps. David Schweikert, R-Ariz., and Alcee Hastings, D-Fla. While neither sits on the foreign relations panel, they jointly launched the Tunisia Caucus in 2013 to promote a "stable, democratic and friendly nation in a volatile and dangerous region," according to Schweikert.

"Tunisia remains the world's only success coming out of the Arab Spring," he told the Arizona Republic earlier this year. "Furthermore, with their adoption of a democratic constitution respecting human rights, we have a moral obligation to be supportive."

The original preamble to the bill recognized Tunisia as "the only Arab nation to have successfully transitioned from authoritarian rule to democracy." Ros-Lehtinen's substitute, which was adopted by voice vote without opposition, asserts instead that Tunisia "successfully transitioned from authoritarian rule and is on the path toward a democracy."

The revised version also adds a new section calling on Secretary of State John Kerry to "continue to assist Tunisia in counterterrorism operations and in security sector reform so that Tunisia may achieve a balance between combating terrorism and protecting its transition to a democracy."

While Tunisia has earned high marks for enacting a new constitution and holding free presidential and parliamentary elections, critics have called for a revamp of security services with ties to remnants of the corrupt regime of deposed President Zine El Abidine Ben Ali. According to The International Crisis Group, the existing security apparatus — including the National Security, police, National Guard, civil defence and correctional services — is both repressive and ineffectual at combating the very real terrorism threat facing the country.

Concerns about Tunisia's ability to strengthen security and economic institutions that were corrupt and politicized under Ben Ali continue to rock the country while also taking a toll on congressional support. While House foreign aid appropriators have signed off on the Obama administration's $134 million request for bilateral assistance, their Senate counterparts are seeking $50 million less.