Israel has stepped up its security measures in the West Bank in response to increasing attacks by Palestinians against settlers, although Hamas says such efforts will not stop it. 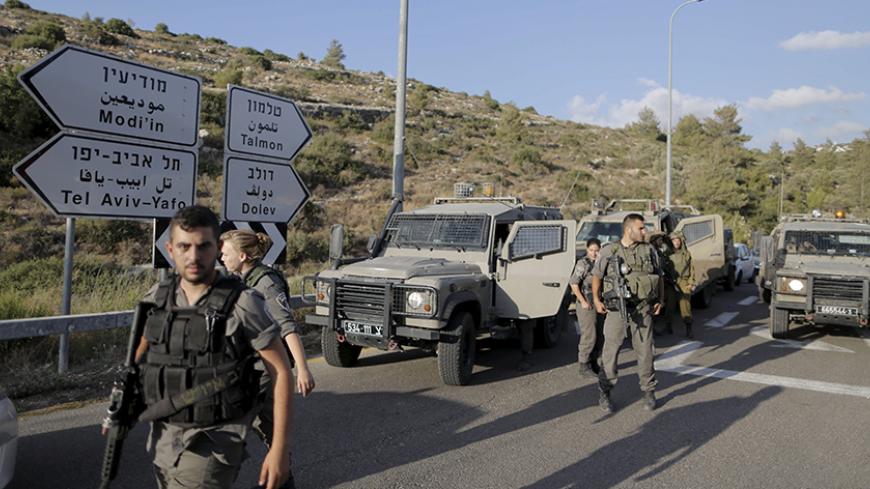 Israeli border police search the area where a shooting took place near the Jewish settlement of Dolev, near the West Bank city of Ramallah, June 19, 2015.

Israel is intensifying its security efforts in the West Bank to counter a rise in attacks on settlers. An Israeli armored patrol was shot at Aug. 23 in Hebron, though no injuries were reported. Hamas predicts Israel's efforts will be ineffective and vows the attacks will continue.

The months of July and August saw an escalation in attacks against Israelis, including two shooting attacks in the cities of Ramallah and Qalqilya and a stabbing in Ramallah. Nine improvised explosive devices were set off, there were 66 attacks involving Molotov cocktails and explosives, and Israeli installations were set on fire, the Hamas-affiliated Palestinian Dialogue Forum stated Aug. 9.

Meanwhile, the Israeli Walla website reported Aug. 11 that 111 operations were foiled by Israeli security forces in the past seven months and that the organizers of the operations were mostly Hamas members.

Yoram Cohen, head of the Israeli security agency Shin Bet, predicted July 1 an increase in what he called “popular violence” among Palestinians, although Israel already had thwarted attempted attacks by 60 armed cells affiliated with Hamas and other organizations since the beginning of 2015.

Khaled Meshaal, the head of Hamas’ political bureau, said Aug. 22 that resistance efforts continue in the West Bank because they are justified.

In an effort to prevent such attacks, Israel prosecuted Hamas activists and intensified arrest campaigns in early July. During these drives, Israel claimed to have obtained confessions that Hamas planned to establish a central command and wide infrastructure, including the appointment of regional leaders, to create fertile ground for military action in the West Bank.

Hamas spokesman Hossam Badran told Al-Monitor, “The resistance efforts are carried out by individual actors in the West Bank, and the shooting and stabbing of soldiers and settlers represent a significant change that will have implications for the future. Hamas supports these operations and encourages their perpetrators. It believes that their continuation is an important step for ensuring that dealings with the Israeli occupation return to their natural status, as a prelude to an overall direct confrontation."

However, this solution is not new, as the Israeli army applied it in late 2005 on West Bank roads and banned Palestinian vehicles from roads used by settlers. It also set up military checkpoints back then and closed many entrances to Palestinian towns and villages using cement and stones to prevent attacks.

A Palestinian security official told Al-Monitor on condition of anonymity, "The recent increasing Israeli security measures in the West Bank result from the dramatization of some facts on the ground and from [Israel] continuing to publicize confessions made by Hamas detainees. [Israel’s measures] are a bid to portray the situation in the West Bank as a ‘hornet’s nest’ and make it look like the Palestinian forces are bracing themselves for military attacks. This would justify Israel’s military onslaught on the West Bank.”

The geography of the West Bank is conducive to armed operations against Israelis, as Palestinian and Israeli towns are adjacent to each other with no natural dividers such as mountains or valleys and there is constant contact between Palestinians and Israelis on roadways. This proximity allows Palestinians to target soldiers and settlers, immediately withdraw from the scene and return to their towns. It also makes it difficult for Israeli security services to find and arrest perpetrators.

Badran explained, “The increasing Israeli measures coincide with the growing resistance in the West Bank, which represents a real threat to both the army and the settlers, as [the resistance] can target their personal security. This makes the army prepared to use extreme types of collective punishment to stop attacks and deter Palestinians at all costs.”

The Israeli intelligence service earlier this year set up digital surveillance cameras to film perpetrators. The move was simple and cheap, as each camera cost no more than $100.

Hundreds of surveillance cameras are deployed in the West Bank on highways, bridges, settlement entrances, gas stations and Israeli checkpoints at city entrances, and the cameras can record in many directions and from various angles.

Islam Hamid, a member of the Izz ad-Din al-Qassam Brigades from Ramallah, was released July 21 after being detained by the Palestinian Authority in 2010 on charges of attacking Israelis. He told Al-Araby Al-Jadeed Aug. 17 that when Hamas fighters plan an attack, they take care to avoid surveillance cameras and withdraw as soon as the attack is made. However, Hamas fighters were surprised during one of the operations by a secret camera placed among pine trees, making it difficult for pedestrians to notice it.

In another new measure, according to a July 15 report in Israel's 972 magazine, the Israeli military is electronically surveilling users of Facebook and WhatsApp.

Ashraf Mushtaha, who works in information security for the Interior Ministry, told Al-Monitor, “The Israeli intelligence is capable of penetrating networking sites. The Israeli army targets are highly reliant on technical aspects, as it is difficult for intelligence services to deal with agents face to face. There is a unit in the Israeli army that includes technicians tasked with spying on Palestinians’ communications and conversations.”