Syria's Palestinians divided over whom to support

The war in Syria has split the allegiance of some Palestinians, with Hamas in Yarmouk supporting the armed opposition and those in Nairab aligned with the Syrian regime. 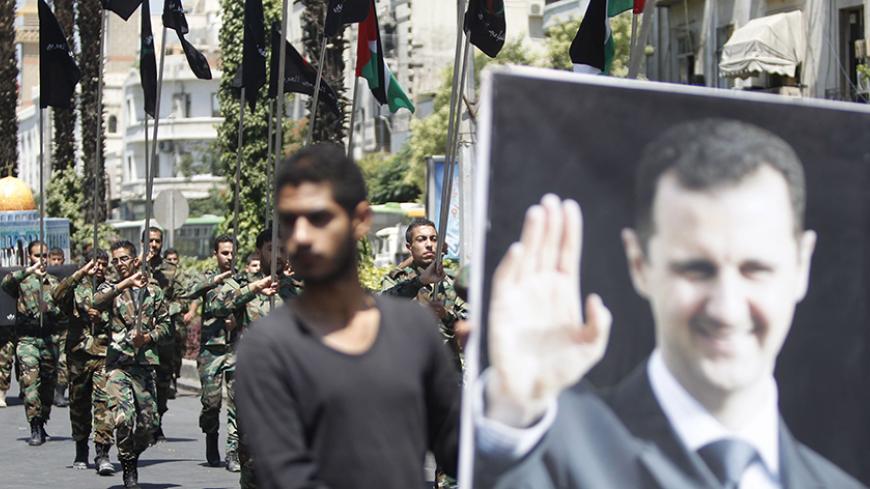 Palestinians living in Syria carry flags as one of them holds a picture depicting Syria's President Bashar al-Assad during a rally marking the annual Quds Day, or Jerusalem Day, on the last Friday of the Muslim holy month of Ramadan in Damascus, July 10, 2015. - REUTERS/Omar Sanadiki

ALEPPO, Syria — On the way to Sheikh Najjar Industrial City from Aleppo, we stopped for coffee at a roadside kiosk. Its owner, Mohammed Sabri, a Palestinian refugee, had posted on the walls of his modest business photos of Palestinians killed in clashes. Prominently displayed was one of his son Khaled, who was killed in Nairab refugee camp by armed opposition groups. Seeing the photographs of Palestinian casualties made me wonder about the standing of the Palestinians in the Syrian civil war. Our Palestinian driver said that for the answer to my question, I had to visit the Nairab Palestinian refugee camp. We decided to stop there on our way back from Najjar.

It is a typical Palestinian refugee camp: small tenements surrounded by high walls, haphazardly built, multistory buildings, animated streets and the inevitable Gaza Martyrs Cemetery. The camp, established in 1956, normally has a population of 27,000. But with more people seeking refuge from the war, it now houses about 50,000 people.

Palestinians in Syria are split over the civil war. Those supporting Hamas joined ranks with the opposition, and those affiliated with Fatah and the Popular Front for the Liberation of Palestine (PFLP) back the regime.

In the first four years of the war, 209 Palestinians from Nairab out of 4,000 overall in Syria were killed. I was taken to a tea garden that now serves as the headquarters of the Jerusalem Brigade, which defends Nairab. Its commander, Adnan al Sayyid, is the son of a family expelled from Zefat by Israel. A Fatah member, Sayyid explained that the tea garden had actually been his restaurant, which he turned into a headquarters.

He listed a series of incidents to explain why his brigade had taken up arms. He said that the armed opposition killed 19 Palestinian young people returning to Nairab from a military camp. After chaining up the driver, the opposition rigged the bus with explosives and it exploded 100 meters (328 feet) from the checkpoint. The opposition then began abducting men from the camp: Hussein Masri, Hikmet Dirbes and Mohammed Jeddah — all civilians — were accused of cooperating with the regime, according to Sayyid. Their bodies were found in a house not far away.

The opposition’s goal was to capture Nairab and use it as a springboard to seize the nearby Nairab air force base.

"They fired mortars to our camp from 3 kilometers [1.9 miles] away. We lost 13 people. … The camp was under siege for 10 months. People had no food and were eating grass and leaves. Four children died of malnourishment," Sayyid said.

"The opposition escalated their attacks on the ground and with artillery. We repulsed all their attacks. They fired 72 Grad missiles in 21 days and 100 houses were destroyed. A helicopter they shot down fell into the camp, killing 18 and wounding 50 people. Fifty houses were damaged. The opposition then besieged Handarat and killed 15 youngsters, claiming they were working for the regime."

According to Sayyid, another reason for the attacks on Nairab was to force Palestinians to leave the camp. “They threatened us to evacuate the camp. We resisted because the camps represent our right to return to Palestine. They told us we had nothing to do with Syria and arranged for emigration of at least 100,000 Palestinians to countries such as Germany, Sweden and Norway. Their aim is to distance us from the Palestine border and to end our struggle for return. The expulsion of our people from Handarat is a part of that plot. Saudi-linked people contacted me and offered $10 million to give up our resistance," he said. "There are 60,000 Palestinians living in Aleppo. You can’t find more than 10 Palestinians who have joined the takfiri terrorists in north Syria."

I asked about the 1,500-strong Jerusalem Brigade’s relations with the Syrian army. He replied, “We get our ammunition from the army.”

I asked Sayyid why, unlike Nairab, the Yarmouk camp in Damascus surrendered to the opposition. He stated his views, saying, “Hamas is the main cause for the fall of Yarmouk. They abused the agony of the people and the youth’s yearning for Palestine. Of the Yarmouk population, 60% are Palestinians."

The PFLP, Islamic Jihad and Hawatmeh’s Democratic Front all remained neutral, which helped the opposition, he said.

"If the Palestinians had united, Yarmouk wouldn’t have fallen. Here … we are together. We don’t let Hamas operate here. All the Palestinians of Aleppo, from the right or left, are fighting in the Jerusalem Brigade. There was a clash at Latakia’s Palestinian camp. We formed a small unit there also," Sayyid said.

Palestinian Zacharia Ferhad of Haifa is a former resident of Yarmouk. He said, “I was the first Palestinian the armed groups threatened and expelled from the Yarmouk camp because I was working as a producer on Syrian television. They seized my car. I bought a new one; they stole that, too.” For Ferhad, Hamas is responsible for what happened in Yarmouk. He said that in addition to removing its political bureau from Damascus and taking a stand in support of the opposition, Hamas has been particularly active teaching the opposition tunnel-digging techniques Hamas learned from Hezbollah.

Sayyid, referring to the Turkish government’s efforts to appear as the defender of the Palestinian cause, said, "Many countries raise their voices for Palestine, but it is the Syrian army that gives me money and weapons. Others support us with words. One of those responsible for our plight is [Turkish President] Recep Tayyip Erdogan. We don’t want the Turkish people to suffer as we did from the takfiri terror. But I am afraid Erdogan will pay for what he has done."

When we asked for permission to leave, the Palestinian commander smiled:

“It was your decision to come here. To let you go is our decision,” which was his way of inviting us to stay for lunch. We did.