Turkey’s refusal to allow entry to the bodies of Kurdish fighters killed in Syria and Iraq has added to already simmering tensions between Ankara and the Kurds. 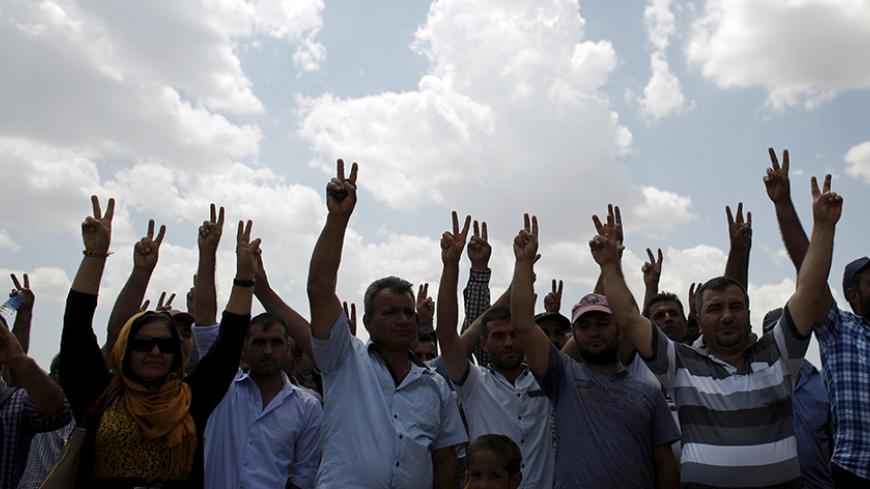 Turkish Kurds flash V-signs as they gather near the Mursitpinar border gate in solidarity with Syrian Kurds in Kobani, Turkey, June 27, 2015. - REUTERS/Murad Sezer

On July 26, a truck arrived quietly at the Habur border crossing between Iraqi Kurdistan and Turkey. It looked like one of the hundreds of trucks that cross the border on a daily basis. Yet the refrigerated truck had an unusual cargo: 13 bodies. They belonged to fighters of the Kurdish People’s Protection Units (YPG) and its women’s branch, the Women’s Protection Units, who were killed while fighting the Islamic State (IS) in Syria and Iraq’s Yazidi-populated area of Sinjar. The YPG is close to the Kurdistan Workers Party (PKK), the armed Kurdish group in Turkey, and many of its members are Turkish Kurds. The 13 dead included 12 Turkish citizens and one of German nationality. Families had already gathered on the Turkish side of the border, waiting to receive the coffins.

The passage of bodies from Turkish border crossings has become a common scene in recent years, as many Turkish Kurds have joined their kinsmen in Syria and Iraq to fight jihadist forces. The battle for the northern Syrian town of Kobani, in particular, saw dozens of bodies crossing the border to be buried at home.

This time, however, something unexpected happened. The Turkish authorities refused to let the coffins in. The move was a surprise for both the escorts and the families of the dead, unleashing a wave of protests and appeals to reverse the decision.

The authorities, however, refused to back down. The truck had to be parked in the customs control area on the Iraqi side. With summer temperatures in the area reaching 50 Celsius (122 Fahrenheit), the truck’s refrigerating system kept working as the relatives of the dead waited on the other side of the border in the scorching heat. Civic society groups and political parties lined up behind the distraught families as they scrambled to convince the authorities to let the coffins in.

After countless petitions to official bodies, sit-in protests and press statements, the 10-day saga ended early Aug. 5. The truck was allowed to cross, and relatives were relieved to finally have the bodies of their loved ones.

“We would have waited even for 10 years to take him home,” Adil Yildiz told Al-Monitor by telephone, shortly before he received the body of his son Ragip.

Another father, Abdurrahman Pusat, said, “I want my son to have a grave. I want to go there every Friday and say a prayer. He is a citizen of Turkey and not any other country.” Pusat’s son Mesut was wounded in clashes in Sinjar and died in a hospital in Syria, where he was taken for treatment.

As the families headed home to bury their loved ones, questions lingered as to why Ankara refused to let the bodies in, exacerbating the plight of already devastated families. According to Ferhat Encu, a parliament member for the pro-Kurdish Peoples’ Democratic Party, another 20 dead fighters await permission to be brought to Turkey at the Mursitpinar border crossing with Syria. A nongovernmental group in Diyarbakir, Turkey’s largest Kurdish city, confirmed the figure.

Why is Turkey making trouble now after having let dozens of bodies in earlier? The crisis seems to be linked to simmering tensions between Ankara and the PKK amid Turkish air raids on PKK bases in Iraqi Kurdistan and almost daily PKK attacks on soldiers and police inside Turkey.

Lawyer Tahir Elci, the head of the Diyarbakir Bar Association, which was involved in efforts to resolve the crisis at Habur, said Ankara apparently worried that the arrival of the dead could lead to mass Kurdish demonstrations and street unrest.

“But those are Turkish citizens. They have not even targeted Turkey, but were killed fighting IS. Their burial at home, with all religious and social requirements fulfilled, is a basic human right. And disrespect to a dead body is both a legal offense and an affront to religious and social norms,” Elci told Al-Monitor.

“Now, more bodies are said to be waiting at Mursitpinar. And others [PKK militants] may be killed inside Turkey. So similar problems may arise again in the coming days. People have the right to bury their relatives properly, according to religious norms. And any mass attendance of such funerals should be seen as natural. Funerals must not become the vessel of political wrangling,” he said.

Elci urged nongovernmental political groups and the security forces to refrain from politicizing the dead, no matter how they have died, to avoid further polarization and emotional scars in an already tense atmosphere. “I hope everyone will be acting sensibly,” he said.

“Citizens of the Republic of Turkey have the right to be buried at home, regardless of where they die. … Keeping the bodies waiting for 10 days was wrong, both in humanitarian and religious and moral terms. Stepping back from the mistake was the right thing to do,” Tanrikulu told Al-Monitor.

“Conflict, war and ‘terrorist activities’ could well come to an end one day, but disrespect for the dead of one’s citizens will leave lifelong scars. … People have the right to demand respect for their dead, no matter how they have died. It’s a civil right, and it has been impeded, which is more painful than the pain of conflict and war,” he said.

Tanrikulu voiced hope that the Habur crisis would be left behind as an isolated incident. “This can’t be a state policy,” he said. “Humanitarian and conscientious issues cannot and must not be the subject of any state policy.”