Economic expectations are high in Iran following the recent nuclear deal, but President Hassan Rouhani has warned against "immediate, but harmful" interests. 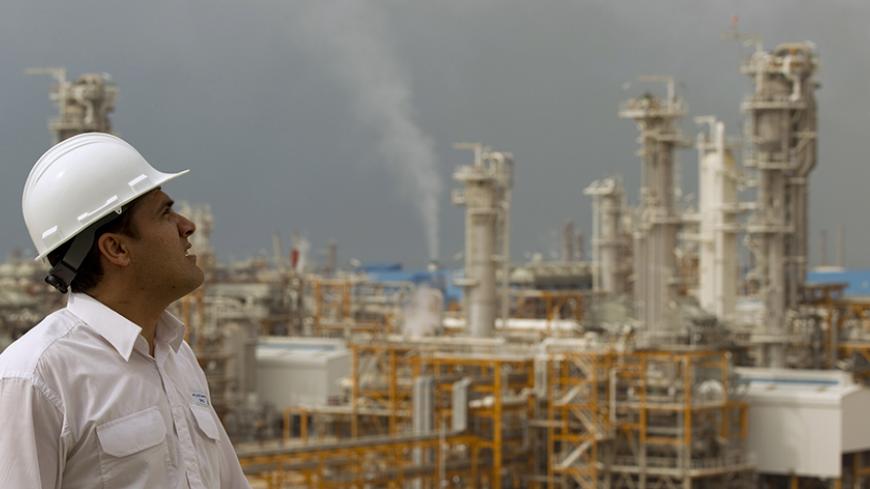 An engineer looks at the Phase 4 and Phase 5 gas refineries in Assaluyeh, south of Tehran, Jan. 27, 2011. - REUTERS/Caren Firouz

TEHRAN, Iran — Ali, a resident of the Iranian capital, holds a master’s degree in chemical engineering. Despite his efforts, he has not yet been able to find a job related to his degree or even his field of interest. “Since the sanctions intensified, oil and chemical companies have been laying off people. To find a job under these circumstances, you need to be a well-experienced expert. Now, with so many students graduating with chemistry degrees and the like every year, finding a job is getting more and more difficult.” Ali says chemistry graduates, in particular, have been greatly affected by the sanctions. He told Al-Monitor that, previously, a job offer in Assaluyeh — home to onshore facilities and the petrochemical industry associated with the giant South Pars gas field — “used to be among the worst.” This is due to the combination of the humidity and high temperatures in this southern coastal town, combined with air pollution. However, Ali said that these days, “It is difficult to find a job even there.”

Following the restrictions imposed on Iran’s oil exports, banking system and petrochemical sector, the Iranian economy went through one of its worst periods since the 1979 Islamic Revolution. Leading international oil and gas companies refused to extend their contracts. This left room for lesser known Chinese firms, which eventually secured market share as they circumvented sanctions in a bid to maximize profit-making and monopolize Iran’s energy market.

With Iran’s recent nuclear deal with six world powers, many young Iranians are hoping for better days. Ehsan, an oil engineering graduate, is not satisfied with his current job. He told Al-Monitor, “I’ve heard that French companies have already shown eagerness to return to Iran’s oil and gas sectors. In 2001, I used to work for Total, and I was paid in euros. I hope the reputable European companies will return so more job opportunities will be available, and we won’t have to tolerate these Chinese firms anymore.”

With the sanctions expected to be lifted in a matter of months, it is becoming apparent that different groups in Iranian society have different expectations from the government in the post-sanctions era.

In 2010, before the most punishing oil, banking and financial sanctions were imposed on Iran, the US dollar traded at 10,500 against the Iranian rial. Even though the rial has appreciated since the election of President Hassan Rouhani, the greenback is now trading at close to 34,000 against the Iranian currency.

The heavy depreciation of the rial pushed up the prices of goods and even caused financial difficulties for Iranians studying abroad. Speaking to Al-Monitor in Tehran, Soheil, a former student, said he was studying at Spain’s Autonomous University of Barcelona four years ago. However, he was forced to abandon his studies and return home as euros grew ever more expensive. He said, “The appreciation of foreign currencies in 2011 forced many students, including myself, to give up their education in Europe. Some couldn’t even take the first step, as their visa applications failed amid the worsening of Iran’s relations with European countries.”

A long list can be prepared of what Iranian society expects of the government in the post-sanctions era. Depending on the strata, there is different emphasis on contentious matters such as foreign investment, Iran’s relations with the world and the cultural, social and political atmosphere at home. What everyone can agree on, however, is the need for Rouhani to decisively deal with the currency situation.

Under former President Mahmoud Ahmadinejad, the rial’s value against the dollar dropped from 8,000 to 38,000 on the open market. The official rate set by the Central Bank of Iran was not devalued at the same pace, causing the effective return of dual exchange rates, which at some points diverged by over 100%. Since taking office in August 2013, Rouhani has managed to somewhat stabilize the situation; the greenback has been trading between 29,000 and 36,000 against the rial on the open market over the past two years. However, even before Rouhani’s election, the public has demanded that the government return the rial’s value to pre-sanctions levels — an expectation that many economists believe is neither possible nor rational.

Prominent Iranian economic expert Saeed Leylaz told Al-Monitor, “A unified foreign exchange rate will soon be adopted. This will fix the dollar rate somewhere between 30,000-32,000 rial, but the future of the rate depends on inflation.”

When asked about the possible dissatisfaction of the public, Leylaz said, “In my opinion, the public is not disappointed with Rouhani’s performance in the past couple of years, since consumer prices have not increased much. The dollar’s value was 35,000 rial when Mr. Rouhani took office, but is now 33,000 rial. The same trend is true about gold and bullion. Maybe some strata of society have certain considerations or expectations, but overall, society has certainly been aware of the recent positive economic developments. This was achieved because Mr. Rouhani has been insisting on political detente and the need for engaging in dialogue with the world.”

Rouhani himself recently went on Iranian state television and said, “We can import pain killers immediately after the sanctions are removed by spending the unfrozen funds on cheap imports. We can also use our resources for investment in the manufacturing, agriculture and services sectors. We opt for the second, and the people should know that the recent [nuclear] agreement will remove barriers and bring about opportunities, but the administration is also careful about how to handle the situation. People should avoid seeking immediate — but harmful — interests.”

The Iranian president’s reference to “immediate — but harmful — interests” may be a response to those expecting and demanding a swift improvement in economic conditions, including a return to the pre-sanctions era, when consumer prices and the dollar were much cheaper. Although Rouhani may have no plans to address such expectations, completely ignoring them could lead to social dissatisfaction, causing difficulties for the president in his handling of domestic politics. To succeed with its agenda, the government should factor in the experiences of young Iranians who have paid the price of the sanctions with their aspirations, including unemployed Ali and former student Soheil. If not, it may face serious troubles ahead.