Palestinian Football Association Head Jibril Rajoub claimed that Israel prevented West Bank entry of Palestinian soccer players, but Israel argues that it was Rajoub who created an incident so he could score political points. 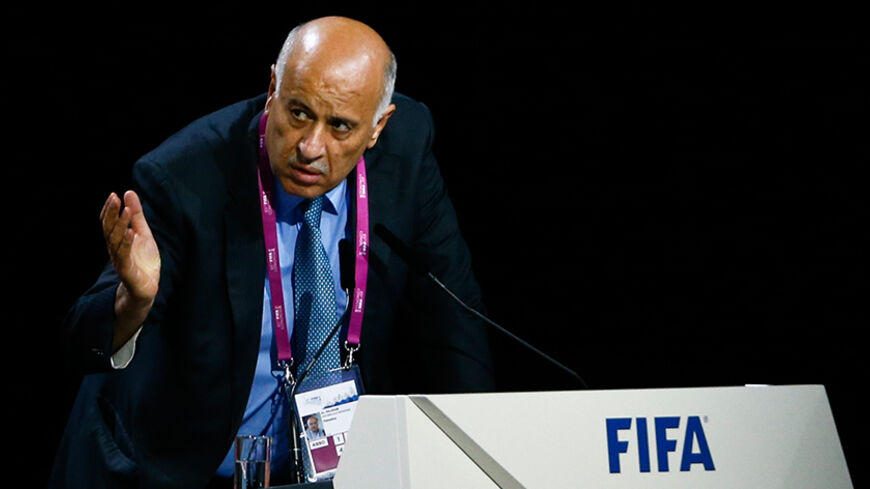 Of all the senior members of the Palestinian Authority, Jibril Rajoub, who serves as head of the Supreme Council for Sport and Youth Affairs as well as the president of the Palestinian Football Association, has been singled out by Israel as enemy No. 1. Ever since his appointment to this position five years ago, Rajoub has launched a relentless political struggle against Israel at international sporting institutions. In the eyes of senior Israeli defense and political officials, he has moved from being a dialogue partner to being a dangerous provocateur.

In the past, Rajoub was a welcome guest in Israel. He would hold working meetings with defense ministers, senior Israel Defense Forces and Shin Bet officials. He was also the bearer of a VIP card that awarded him free passage at border crossings. He was invited to peace-related conferences and conventions and was a favorite interviewee with the Israeli media since he was considered to be the best and most authoritative Palestinian public diplomacy representative. “With him we could do business, reach arrangements, understandings and cooperation. With him we were able to resolve conflicts with the Palestinians on a variety of issues in the best possible way. He always came up with creative solutions and had proven ability to deliver results,” a former Israeli security official, who used to be in daily touch with Rajoub when the latter served as chief of the Palestinian Preventive Security (he was appointed at 1994), told Al-Monitor on condition of anonymity.

His acquaintances in Israel are divided over the question whether bombing his headquarters in Beitunia, a small town in the West Bank west of Ramallah, during the second intifada in 2000 is what brought about the change in his mindset or whether this is an issue of internal strategic political struggles ahead of the succession battle over PA leadership in the post-President Mahmoud Abbas era.

Either way, Rajoub, who was a member of the Geneva Initiative delegation, has become persona non grata in Israel. His VIP card has been revoked. A highly charged struggle rife with rancor and suspicions ensued between him and Israel’s political establishment. The climax, of course, was the FIFA Congress in Switzerland in May, when Rajoub sought to have Israel expelled from football’s governing body, charging that it was mistreating Palestinians athletes and deliberately hurting sporting events and activities in the PA. Shortly before the vote, he was forced to pull his proposal and agree to a compromise that was orchestrated by Sepp Blatter, FIFA’s president, who has since resigned. According to the proposal, a body supervising the affairs between the two sides will be set up.

The parties agreed that this body, which was to meet on a monthly basis, would consist of foreign observers, who, together with representatives from Israel and the PA, would oversee the freedom of movement of Palestinian soccer players and sporting equipment. Yet barely two months after the parties reached these understandings in Switzerland and before the body even started working, tension is swelling again.

On Aug. 7, the final match between the Gaza-based club Ittihad Shejaiya and the Hebron-based club Al-Ahly was canceled. The match would have determined the best soccer team in the territories after Al-Ahly won the West Bank championship and Ittihad Shejaiya beat Khadamat Rafah in an intense, fast-paced game in the Gaza Strip. During the match in Shejaiya, the organizers paraded photos of two IDF soldiers, Sgt. Oron Shaul and Lt. Hadar Goldin, who were killed during Operation Protective Edge in the summer of 2014 and whose bodies are held by Hamas. They even dubbed the match the “Goldin vs. Shaul” showdown.

The Palestinian final match was scheduled to take place last week in Hebron. The Palestinians allege that it was canceled because Israel prevented four Ittihad Shejaiya players from entering the West Bank. The heads of the Palestinian sports council charged that once again Israel violated the agreements and understandings not to stand in the way of Palestinian sporting activities, threatening to appeal to FIFA. Israel was incensed by what they described as a libelous statement. “This is a vile provocation that was masterminded by Jibril Rajoub, who himself stands in the way of Palestinian sports in order to make cheap political gains,” an Israel security source told Al-Monitor on condition of anonymity.

The Israel Civil Administration claims that it approved the Palestinian request to allow the Gaza club to depart to the West Bank. The players were to be joined by staff members and other match officials. The entire delegation should have consisted of 37 people. The District Coordination Office (DCO) in Gaza requested that four players show up for an early interview at Erez crossing before being issued a transit permit. According to the DCO, this is a common and legitimate practice that is done when people request entry visas to other countries. This would have been a short interview that should not have prevented the departure of the four players. The DCO added that those players were asked to come for the interview a day before so as to avoid any delays on match day.

The four did not show up for the interview, and the following day the entire delegation did not show up at Erez crossing. Israel maintains that it did everything it could to implement the understandings that were reached in Switzerland and that the person who stands behind the decision not to show up for the original scheduled match is Rajoub who, once again, wanted to attack Israel in the international sporting arena. Capt. Adam Avidan from the DCO in Gaza told Al-Monitor, “Jibril Rajoub requested postponing the departure of the squad to Wednesday [Aug. 12] after they failed to show up at Erez crossing ahead of their departure for the game in Hebron. We demanded again that the four show up for a short interview a day prior to the club’s departure so as to avert any delays. Rajoub said he would not send the footballers and that they would all show up [together] at Erez crossing. According to him, ‘In the event there’s a delay, you Israelis will hold up the entire squad.’” Avidan continued, “We don’t want to hold up anybody and to the best of my understanding he introduces politics and provocation to cause delays in order to make personal gains, promote his agenda, besmirch Israel around the world and supposedly prove that it holds up players and does not allow the proper functioning of sporting events.”

Rajoub is currently abroad and unavailable for comment. His office in Ramallah, however, rejected out of hand Israel's allegations. “The demand to interrogate players is prohibited according to all the agreements, which is why we didn’t agree to having them questioned. But from here to provocation there’s a great distance,” an official from Rajoub’s office told Al-Monitor on condition of anonymity. “Our goal is to have the players treated as people experiencing tensions ahead of an important game. Our job is to watch over them and bring them to the game calm and prepared.”

Meanwhile, it appears that the emotions have calmed down and the problems have been smoothed out. After a week of exchanging accusations, the team from Shejaiya crossed at Erez on Aug. 12 and was on its way to the Palestine soccer championship. Its departure for the West Bank was without incident, as Israeli representatives questioned the four players who were asked to come for an interview ahead of time. “Ordinary questions were asked at the crossing, and we have no problem with that,” Rajoub’s office commented.

Whether this was a planned Palestinian provocation or Israeli insistence contrary to the understandings, it seems that the level of suspicion and mistrust between the two sides is so high that even a single sporting event can turn into a powder keg.