The head of the Palestinian Football Federation, Jibril Rajoub, feels betrayed by Israel's refusal to grant permission to players from Iraq, Jordan and the UAE to enter the Palestinian Authority. 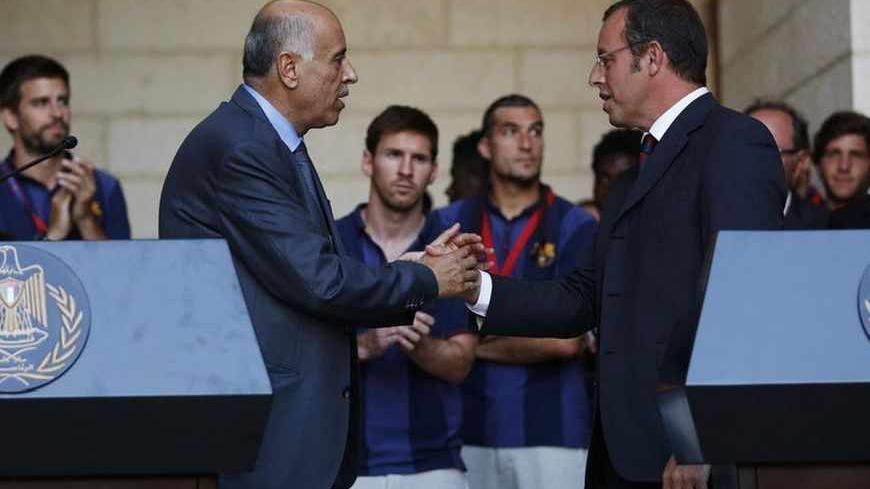 Palestinian official Jibril Rajoub is a very familiar figure among Israelis. He is interviewed frequently by the Israeli media because journalists have almost direct access to him. They know him, and he knows most of them. He was even a member of the “Partners for Peace” group, organized by supporters of the Geneva Initiative, which calls for a two-state solution, and he is something of a darling among peace organizations in Israel, which frequently invite him to meetings and conferences on topics such as coexistence and peace.

This being said, Rajoub is known as someone who trusted the Israelis and cooperated with them throughout the second intifada. Sadly, his Israeli “friends” refused to pay him back in kind.

As commander of the Preventive Security Forces in the West Bank during the second intifada, Rajoub was the only senior Palestinian security official to keep his men in check and prevent them from taking part in terrorist attacks against Israelis. Nevertheless, his command center in Beitunia was bombed and destroyed by Israeli forces. Since then, his name has been bandied about by the Palestinians as someone who trusted the Israelis and got stabbed in the back in return.

It has been a long time since that happened. In conversations I had with him in the past, he told me that he learned his lesson and drew the appropriate conclusions. One of these was to win back the trust of the Palestinians and to convince them that his motives are entirely and purely Palestinian. All he wants is to advance the Palestinian cause. He has no other stake in the game, personal or otherwise.

The truth of the matter is that Abu Rami, as he is known in the West Bank, did manage to win back his reputation. He has since emerged as a powerful and influential figure in the Palestinian Authority. Many people raised an eyebrow when he submitted his candidacy for his current position, and they were certainly surprised when he won. He is now the head of the Palestinian Football Federation.

Rajoub took this job as seriously as any other job he ever had. Forced to start from nothing, he began to promote Palestinian sports. This meant setting up an infrastructure where none existed beforehand, or if it did exist once, it had since been destroyed during the intifada. He built sports fields and gymnasiums, and he provided support for local soccer teams in towns and villages throughout the Palestinian Authority.

Rajoub’s greatest achievement as chairman of the Palestinian Football Federation is his investment in sports education. He poured money into this in the belief that soccer provides young people in the Palestinian Authority with a challenge. It keeps them busy, and that means that it keeps them off the streets, where there is nothing to do. It keeps them away from militant groups, and it provides them with a framework where they can reach competitive athletic achievements. In other words, soccer keeps young Palestinians out of trouble. Rajoub has offered Palestinian youth an opportunity to stay away from terrorism by playing soccer instead.

You might even call it sports in the service of peace.

But then, the man who should have been celebrating, the person who turned the towns of Jenin and Hebron and Nablus from hotbeds of terrorism into greenhouses for the soccer stars of tomorrow, learned that Israel is embarrassing him again, and taking away any reason he might have had to celebrate.

Last week, on Aug. 15, just as the West Asian Football Confederation’s youth tournament was about to begin in the Palestinian Authority, Rajoub was informed that Israel is refusing to grant access to the territories to 13 players, coaches and sports officials from Iraq, Jordan and the United Arab Emirates. The reason given was security considerations.

It is true that only 13 people were denied access, and only five of them were actually players, but as far as Rajoub is concerned, Israel has stabbed him in the back yet again and ruined his celebration, after months of planning and preparation. Instead of having everyone talking about the fact that the West Asia youth championship is taking place in the Palestinian Authority, they were talking about how athletes and officials were denied access by Israel.

Speaking at a tense press conference, Rajoub offered a scathing critique of Israel. Perhaps he was trying to win back some respect after his dignity was trampled, but it was apparent that he could hardly control himself: “We’re prepared to bring the members of the Organizing Committee [whose entry was barred by Israel] in by helicopter, so that they don’t see any Jews, any Zionists, any devils, and any bastards.”

He then took on another task into which he can pour all his energy: convincing FIFA, the International Federation of Association Football, to revoke Israel’s membership. According to Rajoub, the very fact that FIFA allows Israel to behave this way grants legitimacy to the occupation.

It is hard to believe that FIFA would actually expel Israel from the federation. There may be an investigation, and Israel will have to clarify why it would not allow these sports figures to participate in the tournament. But the greatest damage has already been done. As of this week, the Palestinian public has started seeing Israel as having impeded a football tournament, and it did this at the very time that negotiations between it and the Palestinians were underway in Washington.

Palestinians consider the impediment of the competition as an Israeli declaration of intents, saying that it is not really interested in peace.

It is quite possible that the decision to prevent at least some of these sports figures from the Arab world from entering the Palestinian Authority was made on the basis of real security considerations. Nevertheless, there is still one question that must be asked: Does anybody really believe that some soccer player, regardless of whether he is from Jordan, Iraq or the United Arab Emirates, would really come to this tournament to launch a terrorist attack? Would he conceivably join one of the armed groups operating in the Palestinian Authority?

There is no way Israel will be expelled from FIFA. On the other hand, this week it transformed Jibril Rajoub from a peace partner into a foe.