Will Palestinian beach soccer team make it to Vietnam?

The Palestinian Football Association is working with FIFA to promote beach soccer in Gaza by organizing championship tournaments in the Gaza Strip, although the athletes hold out little hope of competing abroad. 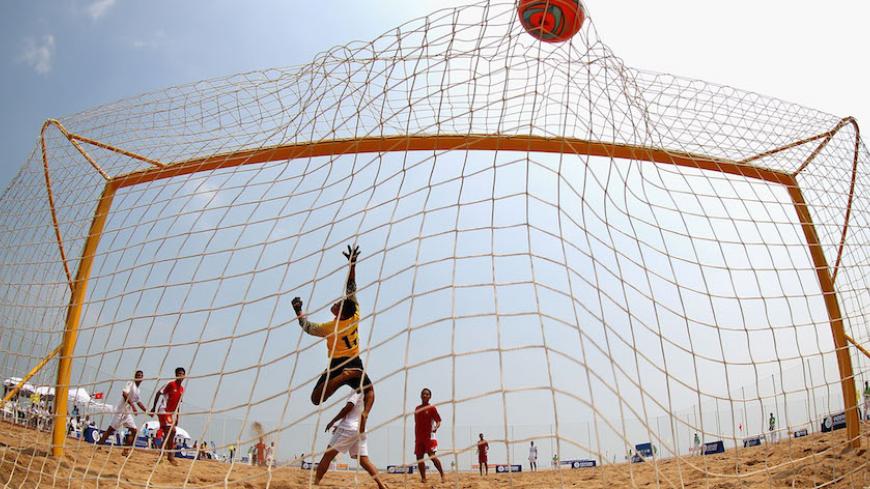 Trang D Huang of Vietnam misses a save during the Men's Beach Soccer preliminary match between Vietnam and Palestine in the 3rd Asian Beach Games in Haiyang, China, June 16, 2012. - GETTY/Ryan Pierse

GAZA CITY, Gaza Strip — The Palestinian national beach soccer team is hard at work training for the Asian Beach Games next month in Vietnam. But officials worry travel restrictions will keep players from attending and are calling for international help.

Since 2014, the team has been unable to take part in any competition held abroad because of limits on passage through the Erez crossing to the north, overseen by Israel, and the Rafah crossing to the south, supervised by Egypt.

With FIFA's support, the Palestinian Football Association organized the first Beach Soccer League Championship between Gaza's Premier League clubs. Officials hope the tournament, held in July, will give the sport a boost in the Strip.

A high-level FIFA delegation visited Gaza on July 1 and inspected the sports facilities destroyed by the latest war on Gaza, as well as the headquarters of the Palestinian Football Association in Beit Lahia in the northern Gaza Strip, which was also damaged. FIFA also opened a soccer field in the Nuseirat refugee camp in the central Gaza Strip.

The championship will be part of the official FIFA agenda and will be organized every year under the supervision of certified FIFA referees, Abu al-Ala told Al-Monitor. FIFA sponsorship, he added, bodes well for the future of the sport. It will help uncover new Palestinian talent and improve the caliber of the players.

He said, “Beach soccer emerged in the Gaza Strip in 2012, when the Palestinian national team scored major achievements, including the bronze medal in the 2012 Asian Beach Games in China, and participated in the 2013 AFC Beach Soccer Championship in Qatar, ranking sixth in Asia and 16th globally. The team also obtained the bronze medal at the 2014 West Asian Football Federation Beach Soccer Championship in Iran.”

“But since 2014," Abu al-Ala explained, "after the war on Gaza and until this day, the Palestinian team has not been able to participate in any championship abroad, since it was prevented from traveling to the host countries."

He blames the travel restrictions for the Palestinian team's drop in ranking to 26th in Asia and 32nd globally. The situation has affected the performance and attitudes of the team’s players and undermined the popularity of this sport at the local level, he added.

Egyptian authorities have kept the Rafah crossing almost completely closed since July 2013, only opening it at rare, brief intervals for humanitarian cases, due to the tense security situation in Sinai. As for the Erez crossing, the Israeli Gisha — Legal Center for Freedom of Movement reports that since March 2006, Israel has denied Gaza residents passage except for extreme humanitarian cases.

Israel is known for blocking athletes from the Gaza Strip from using the Erez crossing. In the latest incident on July 17, 31 players from Gaza were not allowed to cross to the West Bank to participate in Palestine’s first International Taekwondo Championship, organized by the Palestinian Olympic Committee in Ramallah.

Sami Salim, captain of the Palestinian beach soccer team and leader of the al-Sadaka Club team that won Gaza’s first Beach Soccer League championship, told Al-Monitor that although his team won, "We feel that performance is still way below the performance registered in 2014.”

Sports journalist Alaa Shemali told Al-Monitor, “Efforts are being deployed at the local level to revive this sport, which is currently in a bad situation. There are no specialized clubs for this sport, and the players are initially [regular soccer] players. … These players are unfamiliar with the rules of beach soccer.” However, Shemali added, "The FIFA support is a strong sign that things will get better for this sport.”

For Abu al-Ala, the Palestinian Football Federation has been seeking to revive the sport since the beginning of the year by organizing local tournaments and encouraging athletes to become professional beach soccer players. He pointed out that the Palestinian Olympic Committee received an official invitation to participate in the 5th Asian Beach Games, which begin Sept. 24 in Vietnam.

Salim said the Palestinian team is undergoing intensive training for the games in hopes of winning yet another medal. But Salim worries that his team will not be allowed to travel, which will further lower its global standing.

“Players on the national team told me they fear they will not be allowed to pass through the crossings again, which lowered their morale and dampened their enthusiasm toward the games in Vietnam,” he said.

Salim stressed the need for the international community and international sports institutions to take a firm stance to force Israel to allow athletes to travel.