Getting to know Israel's next ambassador to the UN

Instead of rewarding one of his associates, Prime Minister Benjamin Netanyahu named Minister Danny Danon as Israel's next UN ambassador, hoping that a happy Danon in New York is preferable to a strong Danon in Likud's headquarters. 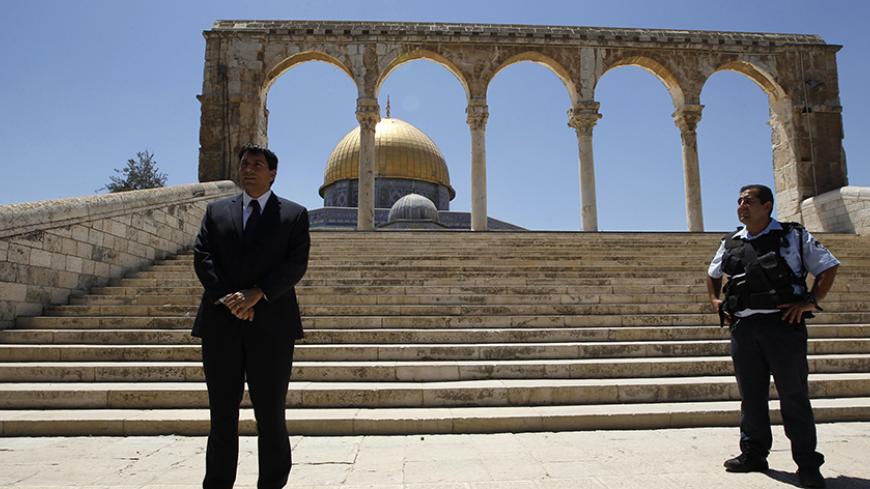 Israeli lawmaker Danny Danon (L), a deputy parliament speaker, stands near an Israeli police officer in front of the Dome of the Rock on the compound known to Muslims as al-Haram al-Sharif and to Jews as Temple Mount, in Jerusalem's Old City, July 20, 2010. - REUTERS/Ammar Awad

On three separate occasions, Prime Minister Benjamin Netanyahu appointed settler darling Danny Danon to senior positions, despite his personal disdain for the man and all the headaches and embarrassments that Danon has caused him. Danon has been attacking Netanyahu since 2007, when he ran against him for the Likud leadership under the campaign slogan, “Danny Danon is to your right, Bibi.”

After the 2013 elections, Netanyahu appointed Danon, then a relatively young Knesset member but one with a considerable Likud power base, to be his deputy minister of defense. Though Defense Minister Moshe Ya’alon excluded him from ministerial activity, Danon wasn’t bothered. He simply used the time to continue building his power base among the Likud’s hard right flank. Before and during Operation Protective Edge, Danon went from one TV station to the next, claiming that the prime minister was controlled by the left and that his policy was too slack. Netanyahu fired him on July 15, but the fanfare that accompanied his dismissal played right into Danon’s hands and actually scored him points on the right.

For months, Netanyahu ignored Danon whenever he ran into him. After the 2015 election, however, he appointed the energetic Knesset member, who had since become chairman of the Likud Central Committee, as the new minister of science, technology and space, while leaving stalwart loyalist Knesset member Tzachi Hanegbi out of the new government. Here, too, Netanyahu wasn’t particularly overjoyed about giving Danon the position. He simply succumbed to the enormous power that Danon wielded among the Likud’s right-wing flank and among the settlers.

On Aug. 14, Netanyahu promoted Danon for a third time, naming him Israel’s next ambassador to the United Nations. Netanyahu preferred Danon over his close confidant Ofir Akunis, who had been loyal to him for the past two decades. Here, too, the considerations were political. As it turns out, Danon has a remarkable ability to climb the ranks of seniority by becoming a nuisance in the Likud, at least as far as the prime minister is concerned. As soon as Danon decided that he wanted that prestigious post, Netanyahu was convinced that only good would come of his appointment. As far as Netanyahu is concerned, a happy Danon in New York is preferable to a Danon who interferes and prevents him from getting his way with the Likud Central Committee.

At the same time, Netanyahu was also made aware of Danon’s extensive ties to Republican members of the US Congress. As everybody knows, Netanyahu has a weakness for this group. One senior Likud member told Al-Monitor on condition of anonymity that Danon’s appointment was not only cleared by Likud insiders but also by insiders in the United States, saying, “Danny seems to know how to pull the strings there, too.”

Netanyahu realized that appointing Danon would unleash a wave of criticism against him, particularly from the left, but problems like that haven’t bothered him for a while now. Another senior Likud member commented cynically to Al-Monitor, also on condition of anonymity, that he doesn’t understand what the fuss is all about. Netanyahu already sent Ambassador Ron Dermer to Washington, even though he is persona non grata as far as the Obama administration is concerned and his appointment only exacerbated tensions between the two governments. After that, people should have realized that the last thing that interests Netanyahu is what people in the United States or the rest of the world might say, said the Likud source. In his own words, “Netanyahu tells himself that there will be a few articles complaining about how he sent a right-wing extremist to the United Nations. In the end, everyone will get used to it.”

The opposition responded sharply, claiming, among other things, that the appointment would only further Israel’s isolation in the international arena. Nevertheless, that protestation misses the point. Netanyahu heads a right-wing government, and no one expects him to appoint someone aligned with the left. It is legitimate for him to select people who hold right-wing positions.

Furthermore, Danon is also intimately familiar with the United States. He was once an emissary for the Jewish Agency in Miami and he holds a degree in international relations from Florida International University. His English is excellent, as are his appearances in the foreign media.

The problem with the appointment is that it testifies to the way that Netanyahu has been forced to send a politician to the United Nations after firing him just a year earlier. And it was Netanyahu who accused Danon personally, saying that his comments helped Hamas during wartime. What does that say about the prime minister of Israel, and what message does it send to senior Likud members? There are those who repeatedly show their loyalty to Netanyahu, only to be taken for granted. Instead, the person he promotes is someone who rebelled and acted disrespectfully toward him.

Danon’s appointment is Netanyahu’s third consecutive appointment in the Foreign Service over the past few days. He began by appointing Dani Dayan, the former head of the settlement umbrella organization Yesha Council, as Israel’s ambassador to Brazil. Dayan may be a right-wing ideologue, but he is also a highly respected public figure.

In contrast, the appointment of Fiamma Nirenstein as Israel’s ambassador to Italy is incomprehensible. It testifies to how little importance Netanyahu places in one of the Foreign Service’s most important positions in Europe, especially in such difficult times. Nirenstein, a former member of the Italian Parliament, is an author and journalist who immigrated to Israel two years ago. One senior Israeli official who was introduced to her when she served as an Italian parliamentary representative to the Council of Europe described Nirenstein to Al-Monitor as a bellicose and embarrassing figure with no sense of official propriety. In that same context, it is worth remembering that the important ambassadorship to France has also suffered from neglect. For years, Israel has failed to appoint an ambassador of stature there to fight for Israel’s positions. Yossi Gal, who spoke only some French, is being replaced by Aliza Bin-Noun, the diplomatic adviser to former Foreign Minister Avigdor Liberman.

Back to Danon. Concerns that he would become the representative of the settlers and far right in the United Nations are hyperbole, at least according to those closest to him. In a conversation with Al-Monitor they said on condition of anonymity that Danon realizes this is an official post of considerable stature, and that he will be expected to represent the positions of the State of Israel, rather than his personal predilections.

Judging by the past few weeks, they could be right. While Danon waited expectantly for Netanyahu to decide on this appointment, he was smart enough to keep a low profile regarding aggressive statements from the right. So, for example, he didn’t say a word about the homes that were demolished in the Beit El settlement or about the Supreme Court’s ruling on people entering the country illegally. It is worth recalling that this is someone who once participated in demonstrations calling for illegal immigrants to be expelled from the country and even made that part of his agenda. Now, however, he preferred to take a different tone and become more statesmanlike.

Danon will arrive in New York in late September for an orientation period with outgoing Ambassador Ron Prosor. These will be diplomatically hectic times, particularly as far as Israel is concerned. The UN’s General Assembly is scheduled to convene with the Iran nuclear deal and its pending approval by Congress looming in the background. Since these are two issues in which Danon is in complete agreement with Netanyahu, the time they spend together could actually bring him closer to the prime minister. That, in turn, would be a good starting point for Danon’s term in the United Nations.