Peshmerga 'ready' to advance on IS

Fighting continues between the peshmerga forces and the Islamic State, but the two sides seem to be in a holding pattern as the Peshmerga await commands from Baghdad and coordination with the United States to advance. 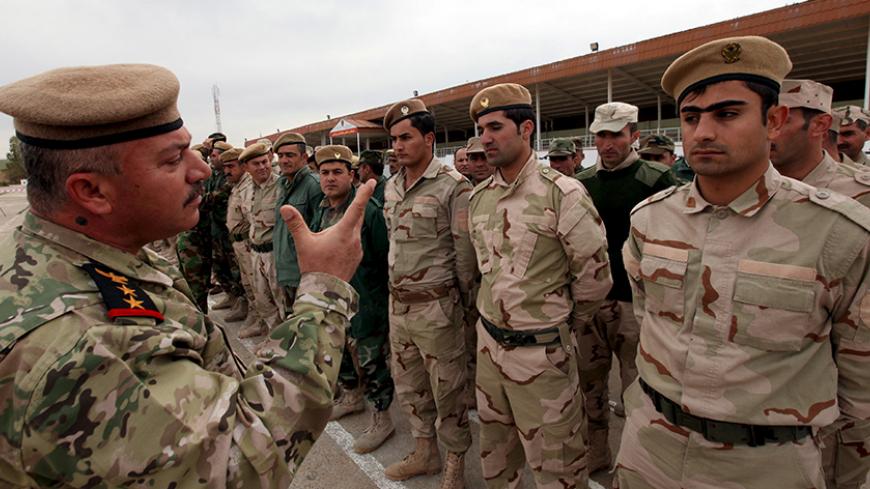 An officer speaks to Kurdish Peshmerga forces during a training session by coalition forces on how to fight street battles and defend the front lines in a training camp in the outskirts of Erbil in the Kurdistan Region of Iraq, March 24, 2015. - REUTERS/Azad Lashkari

The military conflict between the peshmerga and the Islamic State has run hot since 2014 but is currently at somewhat of a standstill. The fighting is less frequent and intense than in prior months throughout the front in Iraq’s Kurdistan Region, due to pressure from both the central government in Baghdad and the United States and its allies. The two are demanding the peshmerga forces hold off on moving up on the front until an impending Iraqi government-led offensive is ready to come to fruition, according to Peshmerga sources.

At present, fighting between peshmerga forces and IS continues throughout Iraqi Kurdistan. “We have a line 1,050 kilometers [642 miles] in length. There is fighting along this line. [During the week of July 27] IS advanced, but the peshmerga repelled them,” Brig. Gen. Helgurd Hikmet Mela Ali told Al-Monitor in his Erbil office. Ali, the general director of the Ministry of Peshmerga-General Directorate of Media went on, “There is fire back and forth, but now it is calm; there isn’t fierce fighting.”

On the front line near Duhok, Brig. Gen. Mara’an echoed this sentiment. “Some days there is fighting, i.e., mortar and tank fire,” he said. During Al-Monitor’s visit to the front on Aug. 4, no back-and-forth fire was observed. April, on the other hand, saw much more intense fighting between the two, and Mara’an recalls losing some of his men at that time.

According to Mara'an and other sources in the peshmerga, the reason that they aren't more aggressively going on the offensive against IS is pressure from Baghdad. “We are waiting for commands from the government in Baghdad” to attack IS more directly, Mara’an said.

A former US Marine in the peshmerga-allied Dwekh Nawsha militia, who requested anonymity for security reasons, took it a step further, arguing that the United States is ordering the peshmerga to stay put. “The US has said this line needs to hold,” he claimed.

There are numerous possible reasons for the delay. Ali believes that the Iraqi armed forces are preparing for an upcoming offensive. “The rest of Iraq needs to prepare,” he said. Considering how swiftly IS seized territory in Iraq last year, concern for the Iraqi military’s preparedness for such an offensive is not unwarranted. The capture of Mosul in June 2014 springs to mind.

Tensions between Kurdish forces and the Iraqi military factor in as well. “If we go on the offense on our own, there will be problems,” Mara’an declared. "We need to avoid sensitivity between Arabs and Kurds." On Mosul, one of IS’ largest cities in Iraq, he had this to say: “If we attack Mosul, [the Iraqi government] will say it's Arab land. Therefore, we need coordination with the Iraqi army.”

Finally, concerns of friendly fire appear to compel the peshmerga and their allies to not move the front line forward. “There are other front lines. If we advance, we will be ahead of other lines. We have to be in one alignment,” said Samer Anwya, a Dwekh Nawsha soldier from the base in Baqofah.

Anwya believes this is because the United States and its allies are worried about hitting the peshmerga in its airstrikes. “They don’t want to get confused and hit us,” he claimed. The former US Marine agreed, saying, “If we pass the line we may get hit by airstrikes.”

The peshmerga forces' belief that it is better prepared to fight IS than the Iraqi military, coupled with the Iraqi government preventing them from going on the offensive at present, demonstrates that the two are not exactly on the same page.

However, their differences have not hindered either’s success as of late. According to Ali, the peshmerga, the Iraqi armed forces and their allies have had more success in 2015 fighting IS than in the previous year. Media reports noted that IS lost several villages around Mosul in January of this year, for example. Despite this progress, until a decision is reached on when to move forward, the current situation of relatively light combat and a static front line is likely to continue.

Batnaya is a small town 14 miles (22.5 kilometers) north of Mosul that is currently controlled by IS. The black flag of the caliphate sits atop a church there. Its mostly Assyrian Christian inhabitants have fled. Its story is the fate of many Iraqis who have been displaced by the rise of IS. The reasons that the Iraqi government has yet to allow the peshmerga to attack IS further are understandable. However, many from Batnaya and elsewhere are hoping Baghdad gives peshmerga the green light sooner rather than later.