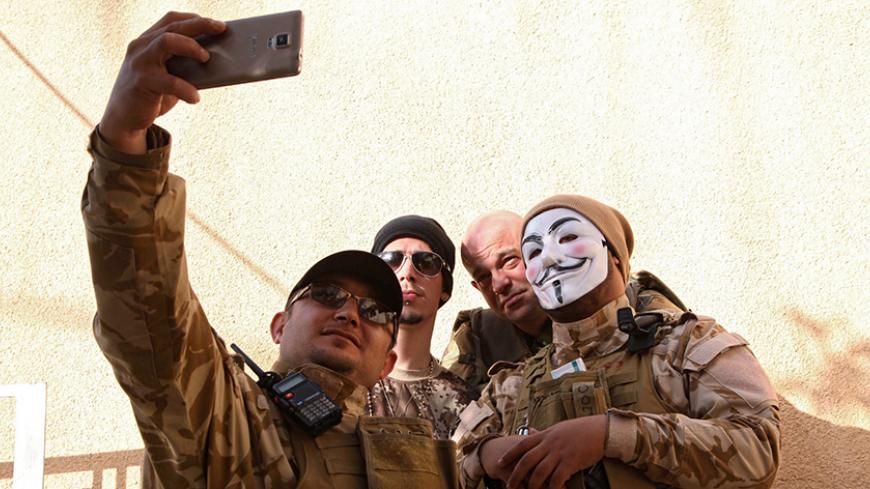 Westerners who have joined the Iraqi Christian militia Dwekh Nawsha to fight against Islamic State militants take a photograph together at the office of the Assyrian Patriotic Party in Dahuk, northern Iraq, Feb. 13, 2015. - REUTERS/Ari Jalal

Dozens of foreigners have joined the People’s Protection Units since the outbreak of the Syrian civil war to fight against the Islamic State (IS). Since early 2015, the Iraq-based Christian military organization Dwekh Nawsha (Self-Sacrificers in Aramaic) has become an alternative destination for such fighters. Despite the enthusiasm surrounding their cause and heavy media attention, Dwekh Nawsha’s Western volunteers only recently began participating in combat roles in the battle against IS. This was the result of monthslong petitioning of the authorities in Iraqi Kurdistan.

“It was a lot of work to be allowed on the front,” said Louis, who did not want his full name used for security reasons. A former US Marine and Afghanistan War veteran, Louis has been with Dwekh Nawsha for six months.

He attributes the delay to “politics.” “I had to meet with many government officials — so did all of us [foreign volunteers in Dwekh Nawsha],” said Louis.

Louis claims that the Kurdistan Regional Government (KRG) in northern Iraq was the reason for the holdup. “[They were] worried about a Westerner getting hurt.” In the end, he said, “I convinced them I’m a greater aid than liability.”

Emmanuel Khoshaba, the secretary-general of Dwekh Nawsha’s sister Assyrian Patriotic Party, echoes this story. “At first, we faced some difficulties to let them go to the frontline,” he told Al-Monitor. Like Louis, Khoshaba ascribes this lengthy process to KRG policy. “There were no rules to establish how they can deal with foreign fighters here in KRG,” he said. Like the fighters, he spoke to KRG officials and ultimately received permission to allow their foreign fighters on the front. “We went and asked and got this permission for our foreign fighters here,” he said.

Dwekh Nawsha’s foreign fighters are busier now. When first interviewed in April, Louis told Al-Monitor, “Some days we are on the front with Dwekh Nawsha. Other times we are piecing together data, training ourselves or the militia men. And other days we are trying to acquire things the militia needs or meeting with local officials.”

Now, Louis says there’s “more activity on the front,” compared with months past. His interview with Al-Monitor was interrupted for several minutes by incoming fire. A video he sent to Al-Monitor appears to show an exchange of fire.

The foreign volunteers are also continuing their training efforts in the militia. “Most of those foreign fighters have combat experience. They gave their training to the guys. They are very helpful,” said Khoshaba.

Much of Dwekh Nawsha’s activity is in coordination with local peshmerga forces. “They are on the same frontline and are here to defend against IS attacking,” said Louis. Khoshaba agreed, “If you are on the frontline, you must cooperate with the forces around you. For that, we cooperate with peshmerga. They are the only other force in the Ninevah plains.”

However, Louis noted that the group is still not seeing uber-intense fighting. “It is slow here — mortars and dushkas [a heavy machine gun] back and forth.” He claims this is due to IS’ activity on the other side of the front.

“They [IS] don’t attack us directly. They sit in their town and don’t try to get close, and we watch them from our town.” He claimed that IS’ latest attempt to move up was in April and speculated that they haven’t done so since out of fear.

Louis added, “Dwekh Nawsha and peshmerga can’t move up until the government says we can.” This frustrates him. “I’m a Marine. I want to go now.” Khoshaba confirmed that Dwekh Nawsha’s position is mostly “defensive” at present.

Dwekh Nawsha was established by the Assyrian Patriotic Party in 2014 after “IS occupied our land and our cities in the Ninevah plains,” said Khoshaba. He said their mission is to “show the world that Assyrian Christian people are not afraid of the fight for their rights and can defend their land if they have support.”

He also said that the group aims to give hope to the Christian residents of the Ninevah plains. “We must give them hope, because all of them at the time [of IS’ invasion] thought about immigrating and going outside of Iraq,” he said. Dwekh Nawsha is only fighting IS presently, meaning they are not involved in the wider civil strife in Iraq and neighboring Syria. Khoshaba said that most of the group’s funding comes from members of the Assyrian diaspora. Louis also uses his Instagram account to ask for PayPal donations.

The foreign volunteers contacted Dwekh Nawsha on the group’s Facebook page. At present, there are three foreigners serving in the group — two from the United Kingdom and one from the United States. At most, there have been eight at a time, according to Louis. They aren’t currently accepting any more and have always capped the number of foreign volunteers they will accept.

“We think a large number would upset the balance. And we couldn’t accommodate more than a few,” Louis said. This is due to a past experience. “Too many Westerners could create too much of a stir. We’ve had bad experiences as well. We have to take in one or two people, then grow to trust them,” he said.

Louis and his colleagues live in a house on the front in conditions he is content with. The fighters and Khoshaba point out that they are not paid. The travel arrangements are also entirely the responsibility of the prospective fighters.

Despite the lingering, relative quiet on Dwekh Nawsha’s front against IS, the increased participation of their Western volunteers in fighting is sure to raise the group’s profile. This is important for Dwekh Nawsha, as they are smaller than their Kurdish allies. In addition, the training they have received from their US and British combat veterans will undoubtedly help them should they go on the offensive against IS anytime soon.