Kuwait is experiencing heightened Sunni-Shiite tensions, but the country's position in the region may make it difficult to address them should the situation worsen. 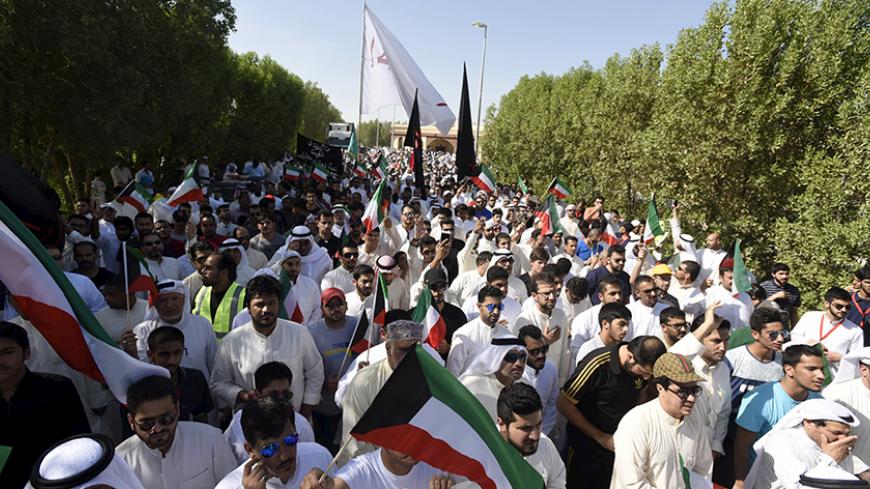 Mourners hold flags as the bodies of victims of Friday's bombing are buried in Al Jafariya cemetery in Suleibikhat, Kuwait, June 27, 2015. - REUTERS/Jassim Mohammed

Kuwait remains mired in political and sectarian tumult following a controversial visit by the Shiite parliamentarian Abdul Hamid Dashti to Lebanon on July 16. While there, Dashti convened a fatiha council, a Shiite traditional gathering to console the family of a deceased member, and read suras. The event, at Beirut's Al-Saha Hotel, was held to honor the souls of the 27 people killed June 26 in Kuwait at Al-Sadiq Mosque by a suicide bomber. More than 220 people were wounded. The Islamic State (IS) claimed responsibility.

The problem in Kuwaiti eyes was not the visit itself nor Dashti accepting the condolences of non-Kuwaiti mourners outside of Kuwait for an event that had occurred in Kuwait. What offended most of them and led to an escalation in sectarian rhetoric on the streets of Kuwait and accusations of some Shiite figures threatening national unity were the photos that Dashti posted on his Twitter account July 19. Dashti is close to Iran and Hezbollah, Tehran's Lebanese ally.

The photos show Dashti kissing the head of the father of Imad Mughniyeh, the late Hezbollah military commander, during a personal visit to the Mughniyeh family home. In addition, other Kuwaiti Shiite lawmakers before Dashti had ignored the apparent wishes of other Kuwaiti citizens by paying tribute to Mughniyeh, who had been implicated in international crimes and was wanted in several countries before his assassination in February 2008.

Most Kuwaitis remember Mughniyeh as the lead hijacker of a Kuwaiti civilian aircraft (Al-Jabriya) in April 1988, an incident that lasted 16 days. The hijackers killed two Kuwaiti passengers. Kuwaitis view Dashti’s expressions of sympathy as sectarian acts that threaten national peace, especially as it was preceded by other actions also perceived as sectarian, among them Kuwaiti Shiite parliamentarian Adnan Abdul Samad’s eulogy for Mughniyeh, in which he called the commander a “martyr.” Samad's words caused a wave of political and popular anger in Kuwait because it was seen as provoking Kuwaiti Sunnis. As a result, the parliamentary immunity enjoyed by Abdul Samad and others was lifted, and they faced trial on July 23, 2008, on charges of destabilizing the country. Charges were later dropped due to insufficient evidence.

Dashti, Abdul Samad and others among Kuwait's 17 Shiite deputies represent the country's Shiite community, which is estimated to be about one-third of the total population. Their fellow Sunnis feel that the Shiites' conduct ignores their feelings and doctrines. Whether intentional or not, such actions could lead some of the deputies’ Shiite constituents to undertake sectarian actions against the Sunni majority.

An example of such an act would be vandalizing the walls of Sunni mosques with disparaging slogans about the Prophet Muhammad’s companions, as has happened numerous times. In May 2011, for instance, someone broke into a mosque in the Mubarak al-Kabeer area, south of Kuwait City, and graffitied the walls with curses against Umar Bin al-Khattab, one of the senior companions of the prophet. On June 4, 2012, Hamad al-Naqi, a Kuwaiti Shiite citizen, received 10 years in prison on charges of insulting the prophet, his wife Aisha and the companions.

Mahmoud Haidar, a Kuwaiti Shiite, owns the newspaper Al-Dar and the Al-Adala TV channel, which a court ordered closed for a year in 2009 for insulting the companions and disparaging Salafist figures in the Gulf. The internal conflicts and quarrels that Haidar and Dashti are involved in largely reflect Kuwait's sectarian tensions, instigated under the guise of politics and freedom of expression.

A tribal deputy in the Kuwaiti parliament who spoke on condition of anonymity told Al-Monitor, “Our problem is not with the Shiite sect nor with the Shiite citizens, who have lived with us for decades. Our problem is with Iran’s proxies, who use the Kuwaiti identity and the country’s constitution to help Iran. They have infiltrated all the key ministries as well as the ruling family. They are planning to blow up the country from within. They are more dangerous than IS, which the entire world is fighting. … The country’s emir, Sheikh Sabah al-Ahmad al-Jaber al-Sabah, is a good man whom they please with happy talk. He wants to be the father of all the citizens. We are aware that the problem is out of his control.”

The deputy accused the Iranian lobby within the government of having leaked a message published July 28 in which Kuwait’s oil minister, Ali al-Omair, warns his Saudi counterpart, Ali al-Naimi, about disputes over extractions in Saudi Arabia's Khafji oil field and in Kuwait's al-Wafrah oil field, whereby Kuwait lost 250,000 barrels a day.

The tribal deputy is not the first to heavily criticize Kuwaiti Shiites. Deputies and academics have spoken openly about Iran’s alleged influence and danger in regard to Kuwait. For instance, in April 2011, Abdullah al-Nafisi, a former deputy and academic, spoke explicitly about former Kuwaiti Prime Minister Nasser Mohammad al-Sabah's relationship with Iran, claiming that it had increased Tehran's influence in the country.

Kuwait is a small country with a small population: 17,820 square kilometers (6,880 square miles) and 3.3 million people. It is located near the centers of sectarian and political influence, that is, Iran, Iraq and Saudi Arabia. Hence, Kuwait is sometimes forced to put its interests behind theirs in the region, making its society more accepting and less resistant to intellectual and political currents in the region. In June 2014, the emir said in a press statement during his visit to Iran that Ayatollah Ali Khamenei was not only the supreme leader of Iran, but of the entire region.

Kuwait's mounting sectarian and political pressures, growing Iranian spy networks and spread of IS cells and terrorist operations could reduce the number of political and security options available to the emir. Although maintaining the status quo and appeasing internal and external parties has become a Kuwaiti tradition, in the long run this approach is only a temporary solution that does not guarantee security and stability for the country. This current Kuwaiti policy is, in fact, dangerous because it makes the government system, which is already weak, susceptible to political and security collapse. This time, change may come from within the Sabah family, which is mired in internal squabbles over the post of crown prince and the power and wealth that comes with it.