Egyptian economic experts oppose an unconfirmed report in the Israeli paper Maariv that an Israeli factory might open in Egypt. 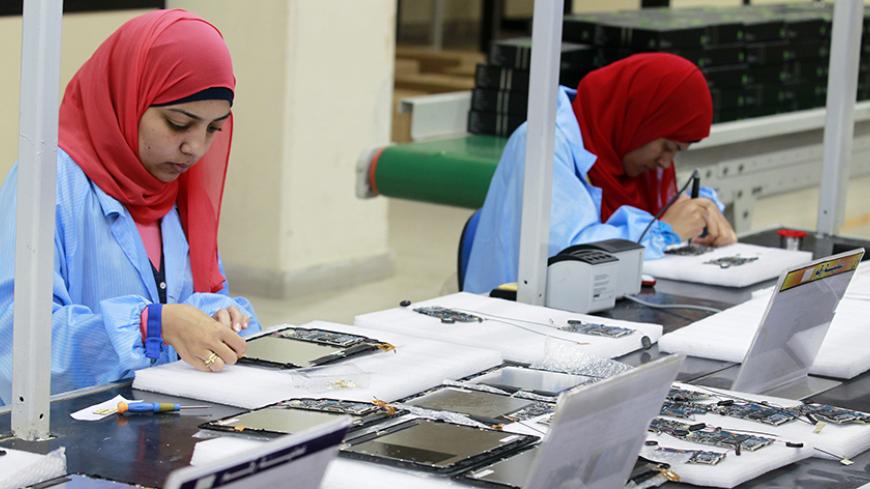 Workers are seen during the manufacturing process for tablet computers at a factory in Banha, Egypt, May 18, 2013. - REUTERS/Mohamed Abd El Ghany

CAIRO — The issue of economic normalization between Egypt and Israel by successive Egyptian regimes is back on the front burner. On July 10, the Israeli newspaper Maariv reported that Israel plans to open a 5,000-worker factory in Egypt.

The article came in the context of news that Ayoub Kara, Israeli deputy minister for development of the Negev and Galilee, met July 10 with Egyptian Consul Mustafa Jamil in Israel and discussed ways to strengthen relations between the two countries. The piece did not mention what industry the plant would serve.

The opening of an Israeli factory in Egypt is surrounded by a lot of ambiguity. Maariv did not specify whether it would be owned by the Israeli government or Israeli investors, or how close it might be to opening.

Al-Monitor tried to verify the news by contacting Yasser Moheb, media adviser to the Egyptian minister of investment, but he did not respond. Al-Monitor also sent an email to the Israeli Ministry for the Development of the Negev and Galilee, but it has yet to respond.

On July 10, the Dotmsr news website quoted an anonymous diplomatic source who denied the start of any procedures for establishing the factory. The source noted that the issue might just be an Israeli intention, not an agreement between Israel and Egypt, and that Egypt is committed to general guidelines in its relations with Israel that cannot be overridden. This could be an indication that Egypt will not accept the establishment of such a factory.

These figures do not include Egypt’s exports of natural gas to Israel, as the Egyptian government signed an agreement in 2005 with Israel to export 1.7 billion cubic meters of natural gas yearly in return for $1.50 for each million British thermal unit. This price is considered lower than international prices. The Egyptian Ministry of Petroleum said in a study published in 2011 that what really pushed Egypt to export gas to Israel is that Israel has been getting a share of Egyptian petroleum since 1979 under the Camp David Accords, as oil wells were under the control of Israel in Sinai. At that time, Egyptian President Anwar Sadat agreed on recovering the oil wells in return for exporting surplus production to Israel. However, the wells dried up, pushing Minister of Petroleum Sameh Fahmi to replace petroleum with natural gas in 2008, according to the study.

As for the reasons behind this low price, the same study found that the production and export of gas from Egypt to Israel involves four stages: production from wells, treatment, transportation to distribution stations in Arish in North Sinai and transportation to Israel through pipes. In many other countries, such as those in Europe, the process is more expensive because there are seven stages: production from wells, treatment, liquefaction, storage, shipping and reconversion to gas in preparation for distribution. This means the agreement for gas exportation might have been reached under special political circumstances — namely the Camp David Accords and the dried up oil wells — and may not have been an expansion of normalization with Israel.

Concerning the volume of Israeli direct investments in Egypt, the website Al-Araby al-Jadeed reported July 25 that according to official Egyptian documents issued in 2010, an estimated $120 million was invested between 1970 and 2010. This is considered a very limited total, as the volume of foreign investments in Egypt from 2004 to 2010 reached about $48 billion, according to Mahmoud Mohey al-Din, former investment minister. So, Israeli investments represented 0.25% of the foreign investments in Egypt for the period between 2004 and 2010. Al-Monitor was unable to verify Al-Araby al-Jadeed’s claim, especially since the report did not include the documents it mentioned.

Gamal Bayoumi, head of Arab Investors Union, and economic expert Ahmed El-Sayed al-Najjar said in 2004 that the Qualifying Industrial Zones agreement — which resulted in an implicit economic normalization between Egypt and Israel — happened only because of “US pressure.”

The agreement allows for tariff-free entry of Egyptian products into the United States without setting specific quotas of total US exports, on condition that 10.5% of the components of the exported products are from Israel, according to the latest amendment to the agreement in 2007.

It should be noted that despite succumbing to “US pressure” and accepting the agreement to maintain its exports of textiles to the United States, Egypt did not expand the use of the QIZ agreement. The ArabFinance news site reported Sept. 1, 2012, that Egyptian exports that are exempt from tariffs according to QIZ amounted to about $51 million in 2010, representing “3.3% of Egypt’s total exports to the US that year,” according to Trade Map for the year 2010, which means the QIZ agreement's impact has been limited.

Currently, Egypt offers facilities to foreign investors who wish to invest in Egypt according to the new unified investment law issued March 12. But the facilities do not affect the state’s security precautions regarding the entry of investments. To invest in Egypt, investors and institutions must file a Security Query Form to the Egyptian Interior Ministry, which confirms the accuracy of the data through the Egyptian embassies in the investors’ countries.

Security expert Maj. Gen. Ashraf Amin told Al-Monitor that the entry of Israeli investors to Egypt is very difficult and that there may be a lot of security reservations regarding this issue because of the Arab-Israeli conflict, which has been ongoing since the establishment of Israel, and the difficulty of predicting how Egyptian citizens will react to such investments. These reservations may also be expressed to prevent the infiltration of Israeli agents into the Egyptian market under the cover of being investors.

In this context, it is worth mentioning the case of Azzam Azzam, an Israeli employee in an Israeli textile company, who was sent by his company to work at a textile plant in Egypt that was a joint business venture of Israeli management and Egyptian labor. He was later arrested in 1996 and accused of industrial espionage for using invisible ink on women's underwear manufactured in the Israeli plant to pass information to Israeli intelligence agency Mossad. In 1997, he was sentenced to 15 years of hard labor.

Medhat Nafi, a finance professor at the Faculty of Economics and Political Science at the American University of Cairo, discounted the possibility that Israel might open a factory in Egypt, saying, “I think that it is just a rumor launched by Maariv because there are many question marks, especially since many African countries, such as Tanzania and Uganda, offer facilities to Israeli investors.” Researching the matter showed that many Israeli businessmen invest heavily in Africa — businessmen such as Marc Rich and Israeli billionaire Lev Avnerovich Leviev, who owns the Africa Israel Investment company.

It is noteworthy that many campaigns, such as the boycott, divestment and sanctions movement, are calling for boycotting companies in the Arab world that are suspected of being significantly owned by Israeli investors or that support Israel.

One of the most well-known cases of Israeli investments entering Egypt indirectly was the sale of the Egyptian Company for Foods (BiscoMisr), which is part of Food Industries Holding Co. and which the government owns a share of, to the multinational Kellogg. This deal was met with a wave of criticism from labor leaders and socialist movements and parties, claiming that Kellogg includes a high number of Israeli shareholders. However, economic expert Hani Sarie al-Din said Dec. 10 that Israeli shares in Kellogg only represent 4%.

Experts disagree about what would happen if Egypt refuses to open a factory after Israel investors submit the paperwork to do so. Basant Fahmy, a professor of economics at the Faculty of Economics and Political Science at Cairo University, told Al-Monitor that Egypt should reject such an investment, describing Israel as a country that is hostile to Egypt, that the entry of Israeli investments would hurt the Egyptian economy and that rejecting such an investment does not harm the investment climate.

For his part, Nafi said that a rejection will not lead to adverse consequences, especially since most global investors already know that political conditions affect economic decisions, as was the case in the economic relationship between the United States and Iran before the nuclear deal. In the same context, he said that not rejecting the factory would have positive consequences by showing the world that the investment climate in Egypt is more stable than in the rest of the world because it is not controlled by politics.

Despite the agreements and the US pressure, Israeli investments can enter Egypt in a limited way or indirectly. So it is likely that the factory story is just a rumor. If not, then the Egyptian government should reject opening it, thus keeping the normalization agreements merely ink on paper.