A look at the Middle East issues Congress will be addressing the week of July 13. 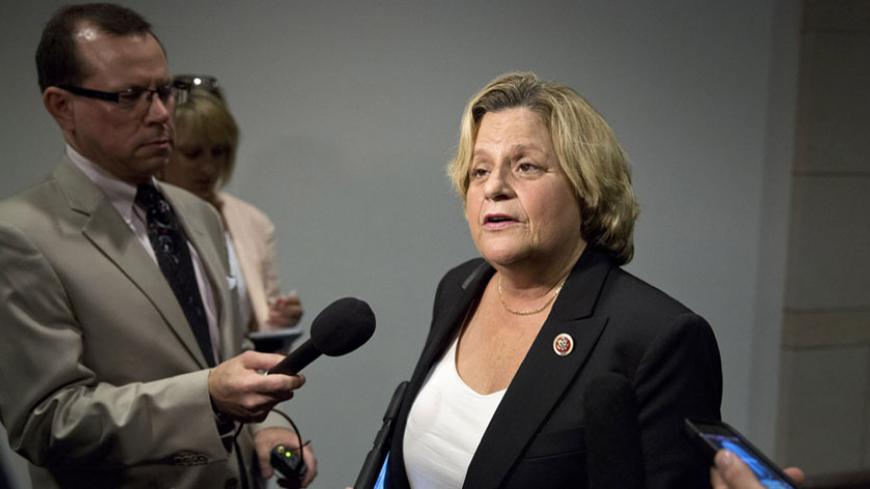 US Rep. Ileana Ros-Lehtinen, R-Fla., speaks to the media before attending a closed meeting for members of Congress at the Capitol in Washington, Sept. 1, 2013. - REUTERS/Joshua Roberts

Congress shifts its focus to one of the Middle East’s few bright spots next week, even as it seeks to ensure that nuclear talks with Iran don’t further add to the regional chaos.

The House Foreign Affairs Committee's MENA panel holds a hearing July 14 with a panel of outside experts on “Tunisia’s fragile democratic transition.” The hearing comes as the White House on July 10 completed the process to designate the country as America’s 16th major non-NATO ally, a symbolic move that also comes with “tangible privileges including eligibility for training, loans of equipment for cooperative research and development, and Foreign Military Financing for commercial leasing of certain defense articles,” according to the State Department.

“Tunisia’s future is still far from certain, but it remains in the national security interests of the US to see the North African country complete its transition toward democracy and to adequately address the threat it faces from violent and radical extremists, like [Islamic State] and other terror groups,” panel Chairwoman Ileana Ros-Lehtinen, R-Fla., said in a statement announcing the hearing. “This hearing is an important opportunity to assess Tunisia’s current state of affairs and to identify areas in which the United States can help secure Tunisia’s democratic future.”

US lawmakers have vowed to help the tiny North African country complete its transition to democracy while helping it combat the Islamist terrorism that threatens to unravel its progress since the Arab Spring revolution that ousted Zine El Abidine Ben Ali. However, President Beji Caid Essebsi’s May visit highlighted the dearth of diplomatic tools available to help Middle East success stories.

Meanwhile, Iran will continue to be in lawmakers’ crosshairs after international negotiators in Vienna announced they were extending nuclear talks through the weekend.

The full House Foreign Affairs Committee on July 14 will hold the second part of its hearing on “the implications of a nuclear deal with Iran.” Witnesses include former Connecticut Sen. Joseph Lieberman, now the co-chairman of the Iran Task Force at the pro-Israel Foundation for Defense of Democracies; retired Gen. Michael Hayden, a former CIA director; and the State Department’s No. 3 official under President George W. Bush, Nicholas Burns, who is now at Harvard.

Congress will have 60 days to review and possibly vote to reject a deal and maintain statutory sanctions if and when a final deal is reached. Key lawmakers made clear during the first part of that hearing that they don’t like what they’re seeing so far.

“That’s a bad deal for us: permanent concessions in exchange for temporary benefits — and that’s only if Iran doesn’t cheat like North Korea did,” Chairman Ed Royce, R-Calif., said during the hearing July 9. “So Iran is left a few steps away from the bomb and more able to dominate the region; this is my take on this.”

Finally, on the Homeland Security front, the House panel with jurisdiction over the issue will hold a hearing July 15 on “The Rise of Radicalization: Is the U.S. Government Failing to Counter International and Domestic Terrorism?” The Homeland Security Committee has recently launched a monthly "terror threat spotlight" that focuses exclusively on Islamic State and other Islamist groups.