Are Turkish courts delaying trials of IS militants?

Although the latest wave of detentions of Islamic State militants and sympathizers have pleased the Turkish public, lawyer Ali Cil questions the handling of the Turkish judiciary in the Nigde case so far. 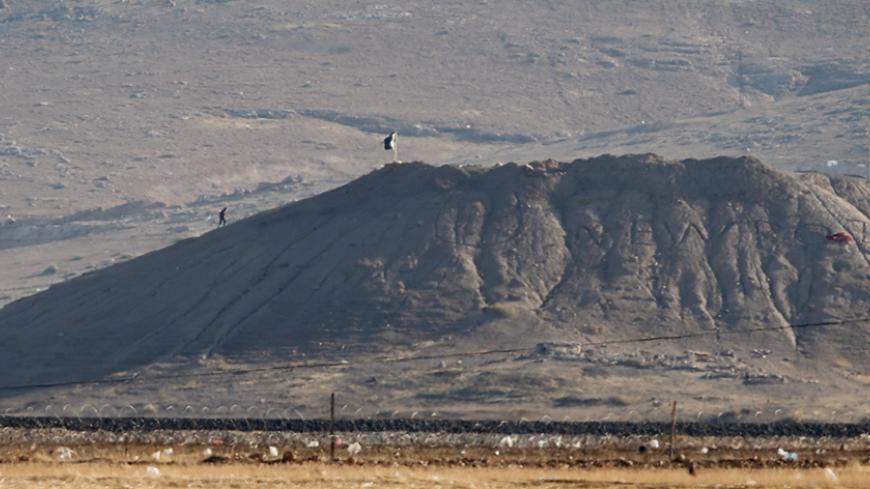 An Islamic State fighter walks near a black flag belonging to the Islamic State near the Syrian town of Kobani, pictured from the Turkish-Syrian border near the southeastern town of Suruc in Sanliurfa province, Oct. 6, 2014. - REUTERS/Umit Bektas

Recently, more than 1,000 IS militants and sympathizers have been detained in Turkey in various police operations.

The pro-government media have been jubilantly celebrating this wave of detentions as a major victory against the Islamic State (IS). But as I noted in my Al-Monitor article on July 13, given the faltering of the Turkish judicial system in dealing with IS, the real question will be the legal process such as indictments and the trials.

Reviewing the progress of the first ever IS court case at Nigde, it is clear that the Turkish judicial system doesn’t want to be questioned about its workings.

On March 20, 2014, IS militants Benjamin Xu, a German citizen of Kosovar origin; Qendrim Ramadani, a Swedish citizen of Kosovar origin; and Muhammed Zakiri, a Macedonian national who had entered Turkey illegally, killed a Turkish gendarmerie noncommissioned officer and a policeman, and later a truck driver whose truck they had hijacked, and wounded 17 others, mostly gendarmerie personnel in the clashes that ensued. These three perpetrators and Fuad Movsumov of Azerbaijan, who is charged with being an accessory before the fact, were later caught and arrested on charges of murdering a public official on duty, smuggling weapons and bullets into the country and looting.

The Nigde court case is of utmost importance because it will set a precedent for the legal process that will be applied in any future armed confrontation between Turkish security forces and IS militants.

Al-Monitor contacted the families of noncommissioned officer Adil Kozinoglu and policeman Adem Coban and their lawyers, but no one wanted to speak. Al-Monitor then reached Ali Cil, the lawyer for the only civilian fatality in the attack, the truck driver Turan Yasar. Cil told Al-Monitor some exclusive details in regard to the court case.

“The Nigde case is of vital importance as the first case involving defendants whose affiliations to IS are known. In the killing on duty of the two security officials, for the first time the Turkish state is the victim and IS members are the accused," Cil said.

He said that the Nigde case is not properly followed by the Turkish and international media, and he made some striking revelations about what is going on.

“The prosecutor’s indictment was completed on Nov. 13, 2014, and we were told that the court will meet on Jan. 12, 2015, for its first session. We were dumbfounded when we went to the court on that day and were told the first session was held on Jan. 9 without informing us or anybody else. This is the first time I experienced such a situation in my 25-year career as a lawyer. How can they move up the trial date in such a critical case that involves fatalities without even informing the victims? The Turkish legal system doesn’t give that authority to judges,” he said.

According to the legal procedures, the court decided that the second session should convene on Feb. 9. Cil added, "With the experience of having missed the first sitting of the court, I called the court in February. They told me that they had sent the file to the Ministry of Justice and were waiting for its response and that the court will not be sitting as scheduled. They said the court session will be delayed by a few days and they will inform us in advance. Then we learned that they held the second session on Feb. 9 in our absence without informing anyone. We were shocked again."

Cil said they were finally able to attend the court hearing on March 5 for its third session. “We made it to the session but this time the defendants were not present. When we queried this, we were told, without citing any reasons, that the accused will participate via teleconferencing from the Ankara prison where they are being held. How can you have teleconferencing in a case such as this? Despite all our demands to bring the accused to the court, after nine months we are yet to see the accused face to face. In Turkey, even in the simplest insult case, the victim and the accused are brought face to face in the first trial session. But in this major case, we missed the first two sittings of the court and did not see the defendants in the third.”

He said that he was shocked by a letter from the General Directorate of Security about the third session. The Nigde court was advised by the police that the Nigde case was sensitive given the approaching June 7 general elections, and that it should be postponed until after the elections. Cil said the police has to abide by the court's decisions, but in this case the police disregarded this and attempted to guide the court about its trial dates. He added that he had never experienced anything like this in his long legal career.

Cil further mentioned other unusual legal practices. According to procedural law, the accused were provided with a lawyer from Nigde, who withdrew before the trial began without giving a reason. This wasn't legal.

When asked why both the court and the prosecutor who is supposedly representing the state did not demand the accused to be present, Cil said, “There are strong suspicions they were released and the defendants are not in Turkey."

When asked how he can explain all this, Cil was forthcoming and said, “I think these IS militants were exchanged by someone for the Turkish hostages held by IS in Mosul and that is why they are no longer in Turkey.”

When asked who that someone was, Cil said, “The AKP [Justice and Development Party] government.” He added, “One of the accused in the Nigde case is a Syrian Turkmen named Heysem Topalca who arranged for their entry into Turkey and who works for MIT [National Intelligence Organization]. How those people entered Turkey and why is still a mystery. But one thing is for sure: People who had MIT links arranged their entry. I must also note that there were enough weapons and ammunition for an army in the car they were using. These people were heavily armed and were definitely on their way to an operation. No matter what, the accused have killed Turkish citizens in Turkey. How can they be set free? Doesn’t the person who signed their release have any responsibility?”

According to Cil the existing legal structure in Turkey is enough to try and punish IS militants. But pressures Cil labels as "political" are delaying the progress of the case. He is sure that if the political climate in Turkey ever changes the handling of this case by the court will also change. "I noticed that the judges are well meaning and aware of the importance of the case but they are not able to do anything when they are under political pressure," he said.

Cil’s prediction about the Nigde case is disturbing. According to Turkish penal code the maximum duration of detention is five years. “That means if the state cannot conclude a trial in five years, the detainees are released no matter what the court case is about. Nine months in the Nigde case have gone by and we do not yet have full identification of the accused, which has to be made in the first session. Until now, none of the 17 wounded in the incident have been interviewed and none of the witnesses have been summoned. If you sit only for one session in four months, then this case can't be concluded in five years. When that period is over, there will be a plea to lift their detentions and they will be set free.”

"The basic goal of delaying the legal process in the Nigde case is to prolong the trial until March 20, 2019, then terminate the detention of the accused and release them," Cil said.

When asked about the recent flurry of detentions of IS militants and sympathizers, Cil responded with a bitter smile, “OK, you caught the IS militant, detained and arrested him. What is more important is the trial process. If you want to fight IS effectively, the first requirement is a correct, speedy and neutral legal process. But sadly this is not the way it is. The Nigde case is the best example. I think that those who perceive combating IS as only bombing north Syria are seriously misguided.”