The recent cancellations of screenings of a documentary on Gaza makes it seem that Israelis are incapable of acknowledging the trauma of war when those suffering are Palestinians. 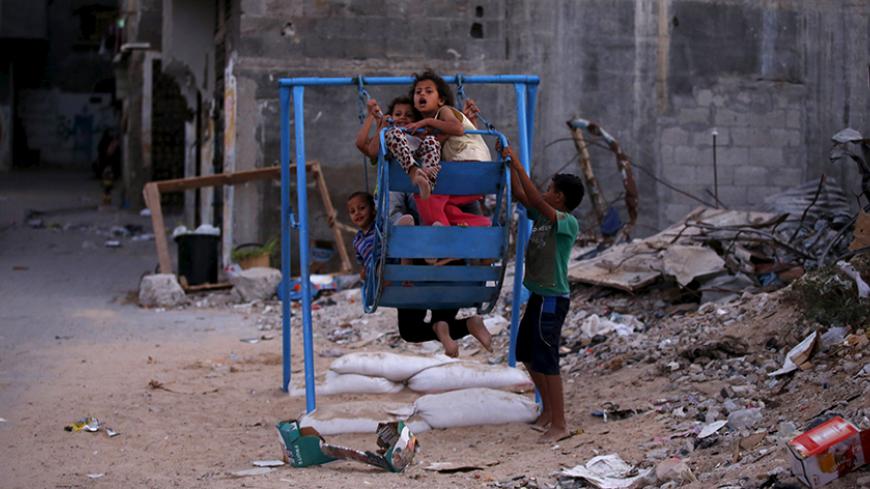 Palestinian children play on a swing near houses that witnesses said were destroyed by Israeli shelling during a 50-day war last summer, in Beit Hanoun, in the northern Gaza Strip, July 22, 2015. - REUTERS/Mohammed Salem

Following the single screening of the documentary “Shivering in Gaza” at the Tel Aviv Cinematheque July 8, the film's director, Geert van Kesteren, was asked by viewers whether the treatment of trauma victims in the Gaza Strip depicted in the film could also be applied to Israelis traumatized by war. “Shivering in Gaza” documents the visit of Dutch trauma expert Jan Andreae to Gaza following Operation Protective Edge, conducted July-August 2014, and his treatment of Palestinian trauma victims there. The audience reckoned that the same treatment used to relieve the pain of Palestinians might help Israelis cope with their war trauma as well.

According to van Kesteren, this was indeed his intention when he sought to screen “Shivering in Gaza” in the southern town of Sderot, near the Gaza border, whose residents have been living with almost constant shelling from Gaza for the last decade. He wanted to tweak their interest in the treatment offered to the Gazans, and thus, hopefully, help them as well. Instead, the scheduled screening at the Sderot Cinematheque was canceled under pressure from right-wing activists, as was a subsequent planned screening in the southern city of Beersheba. In both cases, the local municipality blocked the screening.

“[Andreae] blatantly comes out against the State of Israel and lays on it the entire blame for the situation of the children and residents of Gaza,” Sderot mayor Alon Davidi wrote on his Facebook page. “This is an anti-Zionist and an anti-Israeli film, biased and one-sided. … It takes a lot of gall, and no less insolence and cynicism, to bring to a Qassam-stricken town like Sderot such a film and to trample on the feelings of its residents and children.”

The account by Davidi, who apparently has not bothered to watch the film, is totally incorrect. The word ‘Israel’ is never mentioned in the film, and there are no anti-Zionist or anti-Israeli messages.

“They [the Palestinians] are not playing the game of guilt,” van Kesteren told Al-Monitor. “They are not talking about Israel as the one responsible for their situation. They are just talking about what they have gone through. The film is not about the war [waged on the battlefield], but rather about the war going on in people's head once the firing has stopped.”

Sderot Cinematheque director Benny Cohen is of the same opinion. “The film is deeply humane, certainly not political, and it does not say a word against Israel. I naively deemed it fit to screen the film, as it shows in an interesting way how traumatized people can be cared for. However, there seems to be difficulty here sympathizing with and having empathy for the problems of the other. I can understand the people in Sderot who say, ‘What's the use of watching the suffering in Gaza?’ They cannot fathom anything but their own suffering,” Cohen told Al-Monitor.

“The treatment administered by Andreae is based on zoological research findings showing that deer who survive an attack by a lion use shivering, among other means, to overcome the trauma,” van Kesteren said. In fact, Andreae starts his group therapy with shaking movements and animalistic groans, which provoke laughter of embarrassment and, at the same time, amusement among the patients and film viewers. Then, Andreae abruptly stops and asks one of the participants to recall his trauma and talk about it. The embarrassment and laughter induced by the shaking and growls coupled with the painful recollections lead to deeply moving moments.

Although disappointed by the canceled screenings, van Kesteren said that he fully understands the reasons for it. “As an individual, I can surely understand how the residents of Sderot feel. I realize that this is an ongoing war, and how can you possibly prepare for the next war if you even entertain the idea that the Palestinians may be right in some respect, that they may be human beings, just like you?”

“Shivering in Gaza” reached Israel at a highly sensitive time — in the midst of a culture war, so to speak. The limits of freedom of expression are constantly being tested in regard to criticizing Israel through works of art. Israelis find it hard to feel compassion for the Palestinians and acknowledge their pain, even when such manifestations of sympathy involve no mention of Israel. It seems that mere acknowledgment of the suffering endured by the Palestinians is perceived as “anti-Israeli.”

In an interview with Al-Monitor, Rony Berger, a clinical psychologist and expert in dealing with disaster and trauma situations, said that although there are no hard data on the depletion of empathic ability in Israel, he believes that the situation is going from bad to worse. “People who live under an existential threat, or who feel that they are under such a threat, cannot see the suffering of the other,” Berger said. “According to international studies, such a group of people tends to shut itself off from the world. The members of such a group do not care about other sectors in society, and thus, the lack of compassion shown with regard to a sector seen as really threatening, namely, the Palestinians, is transferred to the Arabs of Israel, as well as to the refugees from Africa and even to the Ethiopian Jews.”

Berger, who is also an adviser to the Center for Compassion and Altruism Research and Education at the Ben Gurion University of the Negev, believes that Israelis' image of Israel as a remarkably empathetic society is way off base. “This feeling of solidarity is not directed outward. It is a serious failure in empathic ability. True compassion is felt for those who are different from you, for those with whom you cannot identify, and even for your potential enemies, rather than for those who are like you,” he said. In Israel, he added, “Compassion is instinctively perceived as justification of the other side. However, if you show compassion for the other side, it does not necessarily mean that you identify with the other side or share its positions.”

Van Kesteren has sought to make room for both sides. “The trauma is something that we all share. It does not belong to a specific person or a specific side. During the Gaza war, there were in Israel both aggressors and victims, just as there were in Gaza. It's through the media and the arts that you can look in the mirror and see where you stand as a person and as a society. This is the real challenge.”

It seems, however, that in Israel of today, the challenge of seeing and acknowledging the other is beyond the society's reach.