Why is Israel trying to shut down this Palestinian TV station?

For years, Palestine TV has dedicated some programming to their Palestinian brethren in Israel, and it was well-received. 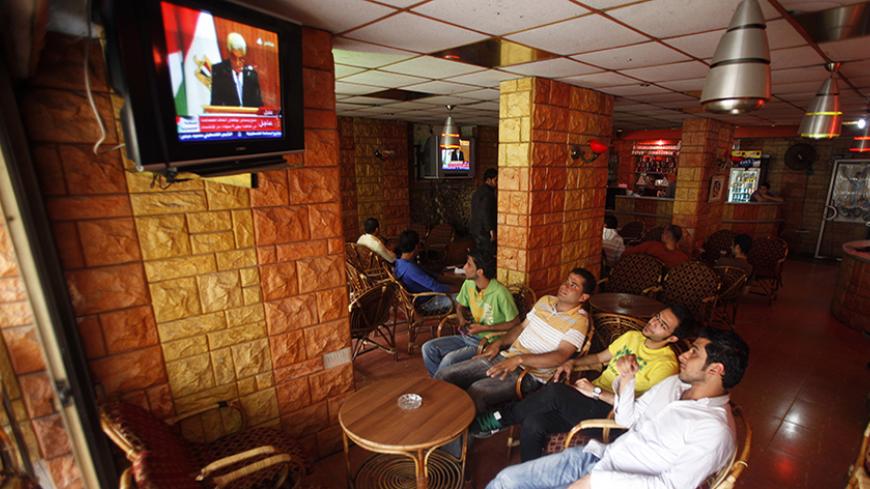 Palestinians watch the signing ceremony of the reconciliation agreement between rival Palestinian factions Fatah and Hamas, at a coffee shop in Gaza City, May 4, 2011. - REUTERS/Suhaib Salem

When writer-lawyer Sabri Jiryis wrote in 1968 his research about the 165,000 non-Jews that remained in their country when Israel was created in 1948, he called his book “The Arabs in Israel.”

For many years, the national identity of non-Jewish Arab citizens of Israel has been in flux. They are usually called "Israeli Arabs." Arabs, including those of nearby Jordan, call them 1948 Arabs. But in recent years, they have settled on the term Palestinian citizens of Israel as the agreed-upon identity for themselves. According to the Israeli Statistics Bureau, Palestinian citizens in Israel today number 1.7 million, 20.7% of the state’s 8.3 million citizens.

When the Palestinian Broadcasting Corp. (PBC) decided to dedicate one of its many satellite stations to Israel's Arab population, it called the new station F48, angering the right-wing Israeli government. The Falastin 48 station was begun during a June 17 news conference on the eve of Ramadan in Nazareth and in the presence of Ramallah-based Palestinian government Communications Minister Riad al-Hassan. Israeli media reported June 18 that Prime Minister Benjamin Netanyahu ordered the station to be shut down, although nothing specifically was done to close it.

For years, Palestine TV has dedicated some programming to its Palestinian brethren in Israel, and it was well-received. So the station decided to dedicate one of its many channels to them. The main F48 satellite is based in Cairo, with studios in Ramallah and Nazareth contributing to it. So no licensing is needed from Israel.

On July 9, Israeli Communications Minister Gilad Erdan issued an order announcing that the new station is illegal and not allowed to operate in Israel. While the station targets Palestinian citizens of Israel, its ownership and financial support lie outside of Ramallah.

The broadcasting has continued despite the decisions by Netanyahu and Erdan. Hassan, who is also chairman of PBC's board, responded that the station’s lawyers would work to ensure that the Israeli decision is not carried out.

“We are buying production services from a duly registered company in Nazareth,” Hassan told various Palestinian and international media outlets.

Hassan was also quoted as saying that Israeli troops would have to physically come to Ramallah to stop the broadcasts.

Palestinian media activists in Israel hailed the creation of the new station. Makbula Nassar, a Nazareth-based broadcast journalist who has been following the creation of F48, told Al-Monitor that Palestinian citizens of Israel have for years faced discrimination in the communication field.

“We are 20% of the population but we have no access to any serious media outlet that is addressing our needs,” she said.

Nassar said that she would have liked to see a purely commercial, independent operation without need of public or governmental subsidy, but the local market and the huge competition from the entire Arab world make such a wish next to impossible. “Television broadcasting is an expensive operation that can’t survive on a purely commercial basis,” Nassar told Al-Monitor.

Nassar, an anchor on the Ashams Radio, a private radio station in Nazareth, said the needs of the Palestinian community in Israel are many. “While we need a media outlet that deals with our local issues and needs, and can give us independent information about the Palestinian issue and the Arab world, we also need a station to support our artists, musicians and producers," he said, adding that most successful creative artists have had to emigrate to Europe because of a lack of a homegrown media environment to support and nourish them.

The start of F48 has also brought many other questions to the forefront. Human rights and media advocate groups — such as the Nazareth-based I’lam Center — were among the first to defend the station and its right to broadcast. I’lam Center, whose previous Director Hanin Zoubi is now an outspoken member of the Knesset, slammed the Israeli decision in a statement issued July 10. “It is a dangerous act that follows other restrictions on the 1948 Palestinians like the actions by the ministries of education and culture against Palestinian theater.”

Senior members of the Joint List of predominantly Arab parties to the Knesset were not as vocal. Khalil Assali, a Jerusalem-based political analyst, said the reason is simple. “Palestinian citizens in Israel are looking inward and are not willing to be dragged to comment or speak out forcibly on large issues such as those of national identity,” he told Al-Monitor.

While the emergence of F48 has captivated the attention of Palestinian Arabs inside and outside of Israel, the issue was not lost on a number of Israelis, especially those in the creative field who are often close to the peace camp. “In this global age where communication is almost limitless and as Israel aspires to and brags about being the only democracy in the Middle East, I think that if it chooses to censor this freedom of speech, it is defeating its own argument,” film producer Nimrod Shanit of Tel Aviv-based Zed Films told Al-Monitor.

As politicians and lawyers argue and debate about the continuity of the new TV station, the broadcasts have continued to an increasing audience pool. “We have seen various Israeli government attempts to broadcast in Arabic without much popular success. Now that this right-wing government is attacking the new station from Ramallah, many are tuning in just to watch it,” said Nassar.

Israel’s media attack on the new station notwithstanding, it looks like the Palestinian government, embroiled in so many difficulties and unable to produce a coherent peace strategy, has found a small success story. By broadcasting out of Ramallah to their brethren in Nazareth, Haifa and the Negev, Palestinians have been united despite the walls and legal obstacles that separate them.