Israel buries bodies of Palestinian dead in what is known as the “Cemetery of Numbers," a poorly managed site where many bodies reportedly have been lost mainly due to negligence. 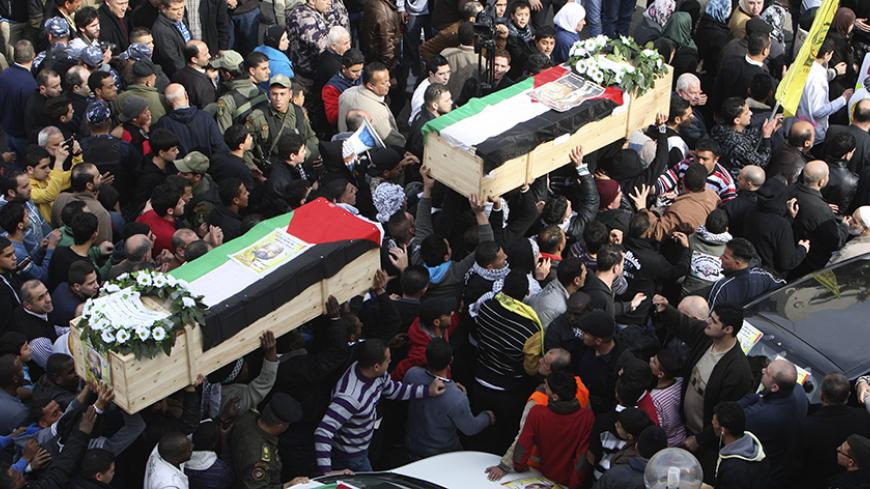 Palestinians believe that Israel is seeking through this proposal to blackmail Palestinians with their dead in order to recover the bodies of its soldiers. Issam Aruri, general director of the Jerusalem Legal Aid and Human Rights Center, which launched a national campaign to recover the bodies, said that “with the new changes in Israel’s politics, after the war on Gaza and after Israel declared that Hamas has the severed limbs of two of its soldiers, [Israel] is now trying to recover the bodies through negotiations on the Palestinian martyrs' dossier, exercising a type of political blackmail, although it had previously pledged to release them.”

Yedioth Ahronoth, on the other hand, said Hamas is holding the Israeli soldiers' bodies to pressure Israel to release more Palestinians.

The family of Nasser al-Buz, the leader of Fatah-affiliated Black Panther groups in the first intifada in the city of Nablus, is still waiting to learn the fate of their son, who has been missing since August 1989. During the first intifada in 1987, such Black Panther groups were active against those collaborating with Israel and hung them. The groups also carried out suicide attacks against the occupation forces, which prompted Israel to persecute, assassinate and arrest the groups’ leaders before the 1993 Oslo Accord. For example, founder Ahmed Awad Kamil was arrested in 1992 and released in December 2013.

Israel announced May 31, 2012, that it had delivered Buz's body along with the bodies of 91 other Palestinians. However, after conducting DNA tests in Jordan, the family found out the remains were not his.

Nasser's brother Ahmed told Al-Monitor, “It was the first time we heard anything about Nasser’s fate when the PA informed us of Israel’s intention to hand over Nasser’s body. This is why we requested tests to make sure the body was his. We took his remains to Rafidia Hospital in Nablus to extract samples for tests in Jordan.”

He added, “We had doubts about the identity of the remains, because my brother was 23 years old when he went missing, and his teeth were intact, but the remains [looked like those of] a man in his 40s whose teeth looked dislocated; these were not [features] of my brother Nasser.”

Ahmed said, “Four DNA tests were conducted in Jordan, after which we found out that the body was not his, and we are still waiting for any new updates.”

Israel continues to hold the bodies of 262 Palestinians and Arabs in the Cemeteries of Numbers, in addition to 13 bodies held after the recent war in the Gaza Strip, the Jerusalem legal aid center told Al-Monitor.

Israel had kept such bodies in the past in secret graves set up for that purpose in the Cemeteries of Numbers, simple graves surrounded by stones. Over each grave, a metal plate bears a number instead of a name.

The legal aid center documented the presence of four such cemeteries in Israel. They are the Cemeteries of Numbers, located in a military zone at the Israeli-Lebanese-Syrian border; two cemeteries in the Jordan Valley, one in a closed military zone and the other called the Revidim Cemetery; and the Shahita Cemetery north of Tiberias city.

On Aug. 7, 2008, the Jerusalem legal aid center launched the National Campaign for the Retrieval of Palestinian and Arab War Victims' Bodies and the Disclosure of the Fate of Those Missing. The campaign succeeded in recovering 123 bodies after a father asked the center to follow up on his son’s case in Israeli court. This is how the center decided to include the bodies of those who had died or are missing in its effort.

“According to our records, there are still 262 martyrs, in addition to 13 others following the war on Gaza in the Cemeteries of Numbers, as well as 80 people who are considered missing, as there is no information on their martyrdom,” Aruri told Al-Monitor.

“Certain martyrs' [bodies] have been held since the 1960s. According to our documented records, there are 262 martyrs, but Israel only admitted to 132.”

The discrepancy could be due to negligence in the burials and Israel’s failure to document the names of those who died. In addition, Israel previously relied on the private company AIS to deal with the corpses, which resulted in the loss of dozens of bodies that were not buried deep enough, Aruri said.

“Israel is recklessly and chaotically dealing with the bodies of martyrs. This was demonstrated in the loss and failure to identify some of the bodies, which led us to submit a request to the Israeli Supreme Court to set up a DNA bank to save samples from the families of martyrs in order to have a thorough examination of each corpse,” said Aruri.

Issa Qaraqe, head of the Detainees and Ex-Detainees Affairs Committee, told Al-Monitor, “There was a semi-agreement with the Israelis during the recent negotiations for all martyrs’ bodies to be delivered at different stages. Last year, Israel informed us that it intended to hand over 100 martyrs’ bodies, but it still has not done so, nor did it explain the reasons why.”

Qaraqe explained, “We have raised this dossier internationally at the political and legal level, which embarrassed Israel and caused it a scandal, pushing it to show flexibility.”

Palestinians hope they can close this wound that has been open for dozens of years and have their children’s bodies back in order to honor them with suitable burials.