Gazans are calling for tighter monitoring by the authorities over money traders, who they believe are manipulating dollar-shekel exchange rates to their advantage. 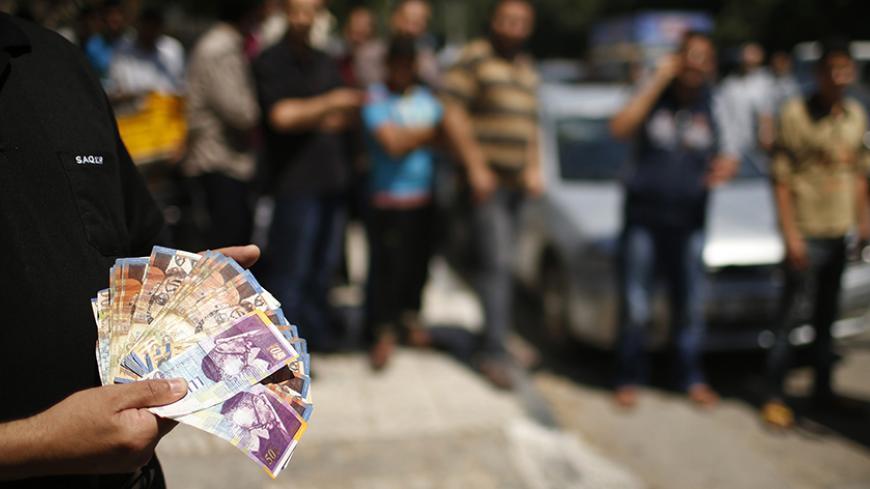 A Palestinian employee paid by the Palestinian Authority shows money to the camera after withdrawing cash from an ATM machine outside a bank, in Gaza City, June 11, 2014. - REUTERS/Mohammed Salem

The varying exchange rate of the dollar in the Gaza Strip from one trader to another may give way to a black market as the demand for dollars grows, especially on paydays, when there is a lack of liquidity. It seems that money traders are in control of the exchange rate and are unmonitored as they seek to increase their profits.

Ayman Moussa, who works for the Palestinian Ministry of Education, was visibly angry as he stood in front of the Palestinian Islamic Bank in Gaza and mumbled indignantly.

He told Al-Monitor, “The bank should exchange my salary of 3,200 Israeli shekels for their equivalent of $849. But under the pretext of a lack of liquidity, [I am now losing] 200 shekels from my salary because the exchange rate at the bank differs from the external market by about six shekels, or $1.50 or even higher, because the bank manipulates the dollar exchange process on its whim, and the value [at the bank] is different from the market value. There is no monitoring from the Ministry of Economy or the Palestinian Monetary Authority. [The bank] forces me to receive my salary in dollars under the pretext that shekels are not available. The bank should cash my check in shekels, as paid by the Palestinian Ministry of Finance.”

In the Palestinian territories, banks publish currency exchange rates every day according to the international market, but they do not necessarily adhere to the stated prices. These rates are not even displayed by independent currency traders, who also do not even follow them. There is a lack of legal and governmental monitoring of this trade and leaves Palestinian citizens vulnerable.

Rana Wadi, an employee in the Ministry of Planning said, “My problem with the money traders in the Palestinian markets is that I find big differences in the dollar exchange rate from one dealer to another, sometimes by up to five or six shekels, the equivalent of $1.50 for every $100.”

Ziad Sayyam, who works for a company working in the Gaza reconstruction projects and declined to name his employer, said that he earns his salary in dollars and that the problem lies in the many money traders in Gaza who stop using the shekel whenever the dollar is high, forcing him to accept the exchange rate that the traders set for customers — one that is different from the one traders use between each other.

In Palestinian banks, government employees traditionally get paid in Israeli shekels. But some banks sometimes force them to receive their salaries in dollars, claiming shekels are not available. At the same time, some private companies make checks out to their employees in dollars, but the bank cashes them in shekels because dollars are not available. In both cases, the banks gain and the employees lose, falling victim to dollar price manipulation by the banks.

Radi said that the banks, without asking the permission of account holders, change the denomination of currency held in accounts and pocket the gains. The banks also often cheat customers by replacing the remittances coming from XPress or MoneyGram in shekels to dollars and at a price lower than the market price by a large margin.

An official source at the Palestinian Islamic Bank told Al-Monitor on condition of anonymity that these accusations against the banks are not true, stressing that employees are not being cheated, because the money exchange rates for the banks are unified in the West Bank and Gaza Strip and the Palestinian Monetary Authority monitors this process. He said, “The dollar-shekel exchange rate differs between the banks and the foreign market because of the overabundance of dollars in the Gaza Strip. The banks are pressured by the existence of such large amounts of unused funds.”

Palestinian money trader Jihad Suleiman told Al-Monitor, “Although Gaza is linked to the global money market, it is a special situation because it is subject to local market rules and money demands. The blockade has caused the dollar price to vary between money traders.”

Jamil Salehi, a real estate dealer and owner of an engineering construction company in Gaza, told Al-Monitor, “All my dealings in the market and my residential sales take place in the dollar. When I want to convert dollars into shekels I face great difficulties because I deal in very large amounts with the traders. If I want to convert dollars to shekels, I contact more than 10 traders to get the best possible rate. Ironically, I get a different price from each trader. There is no agreement on a unified exchange rate.”

Mouin Rajab, an economist and lecturer at Al-Azhar University in Gaza, told Al-Monitor, “The Israeli siege and restrictions on trade movement between Gaza and the West Bank have cast a shadow over the dollar exchange differences between Gaza and the West Bank. The difference is now big because the Israeli Central Bank determines the exchange rate and mechanism. Thus, we Palestinians obey this because we are part of the system that works according to the Paris Economic Agreement signed between the Palestinian Authority and Israel in 1994.”

Amin Abu Aisha, a financial and economic analyst, said in a press statement published March 22 that the major money traders in Gaza, in partnership with the largest local banks, set the exchange rates, and this process provides them with great profits due to the large difference in the dollar exchange rate between Gaza and the outside.

Many Palestinians — particularly workers concerned for their paychecks — say that the Palestinian Monetary Authority, a Palestinian Authority institution, and particularly the Audit and Inspection Department, which monitors banks and money traders, should be responsible for overseeing the banks and money traders, which control the fates of tens of thousands of citizens. The banks and the traders manage the dollar at their whim, regardless of whether they are dealing with salaries, personal savings or commercial transactions.

The Palestinian Monetary Authority announced April 15 that it had received complaints from citizens about differences in the dollar exchange rates that caused the citizens great losses.

On March 23, the Monetary Authority called on all money traders in Palestine to calculate their currency exchange rates according to the prevailing global prices. It also warned that those who violate this decision would be subject to disciplinary action, and noted that this decision was made to protect citizens’ rights. The directive received only limited obedience by banks and money traders in Palestine.