Sadness and feelings of loneliness and great loss are sweeping across the Gaza Strip, where people still mourn the loss of their loved ones. 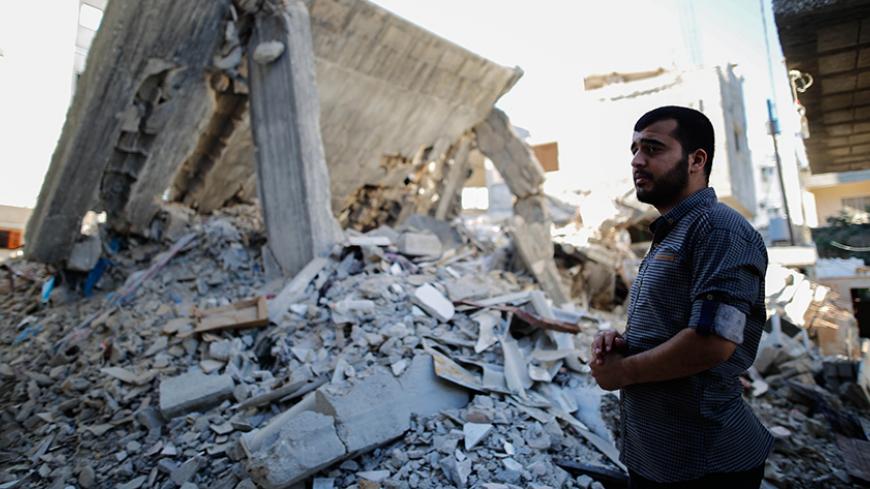 KHAN YUNIS, Gaza Strip — While Yasser al-Hajj and Tayseer Abu Jameh both hail from the city of Khan Yunis in the Gaza Strip, their bonds go far beyond mere geographic proximity. They represent the many Gazans who have suffered unspeakable tragedy and are trying to move on from their grief.

Hajj came out of his friend's house in the al-Amal neighborhood in west Khan Yunis at dawn on July 10, 2014, after he heard a loud explosion. He saw dust and smoke coming from the rubble where his house had stood moments earlier. He quickly realized that he was the sole survivor of the Israeli bombardment that had targeted his home.

On July 12, Abu Jameh returned from morning prayer to find his house had been turned into a pile of rubble, just 100 meters (328 feet) from where Hajj's house had stood two days earlier. The Israeli attack had killed his wife, Shahinaz, and their children, Fatima, 9, Ayoub, 7, Ryan, 6, Noujoud, 5 and Dina, 3.

In an instant, the lives of Hajj and Abu Jameh had been changed forever.

Now, a year after the war and a year of living alone, Hajj, 25, stood in front of his destroyed home and told Al-Monitor, “I thought wounds heal with time, but this is not true; they get worse and become more painful.”

He said that he lost eight of his family members during Ramadan. “On the first day of Ramadan this year, as I was getting ready to break my fast, I lost consciousness for two hours. I could not bear all this pain. I am not used to spending Ramadan without them; my heart aches with every season and holiday I am without them.”

The Israeli army bombed the homes of 70 Palestinian families during Operation Protective Edge. Relatives who lost family members in the summer of 2014 turned to Palestinian legal rights organizations to file lawsuits against Israel and its army, whom they accuse of having committed war crimes.

Hajj lost his father, Mahmoud, his mother, Basma, and six siblings. At the time, he did not grieve and did not bid them a proper farewell. Death came too quickly. Hajj now lives in perpetual sorrow. He said, “I am not just an orphan. Being an orphan is when you lose your father and your mother, but I lost everyone. They are all gone. I wish I had not visited my friend that night and stayed at their house.”

The report published June 24 by the Independent Commission of Inquiry, which was established pursuant to a UN Human Rights Council resolution, said that Israel had carried out 6,000 airstrikes in the Gaza Strip, many of which targeted residential buildings that killed 2,251 Palestinians, including 1,462 civilians.

A year has passed, but the effects of the war are still visible and omnipresent in Gaza. Reconstruction efforts have faltered, and more than 100,000 Palestinians are still either without shelter, in rented accommodation or staying with relatives. More than 18,000 houses were destroyed by airstrikes and 100,000 others were damaged.

Hajj said that his faith is unshakable, but that he does not know how he will go through life without his immediate family.

“It has been a while since I came here, to our destroyed home … once I came looking for clothing [that had belonged to] my brothers, my mom and my dad to keep as a souvenir after the warplanes wiped out all other memories,” he said.

Abu Jameh, 33, is lonely and suppresses his pain just like Hajj. However, he has chosen to distance himself from everything that reminds him of his past life, since it was more than he could take. He initially avoided Al-Monitor’s calls, before agreeing to an interview. 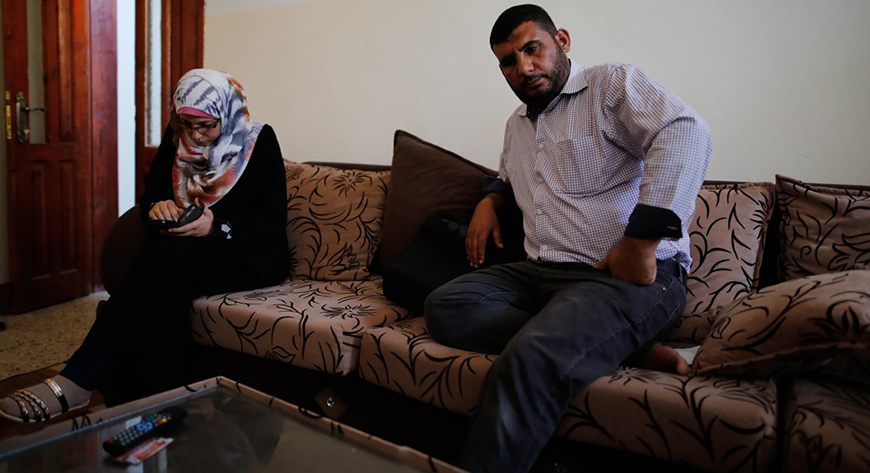 “I told you I was unavailable as I didn’t want to talk about the past and relive the pain. This great loss in my life has changed me. I now know the value of my family and I also have a different perspective on things around me. I don’t poke the wound,” he said.

Abu Jameh can't even bear to visit his old neighborhood in the village of Abasan east of Khan Yunis, since this would bring back painful memories of what happened to the 25 family members — including his mother, brother, wife and children — he lost. Abu Jameh rented a new house and married lawyer Jihad Rihan, 26, who is now seven months pregnant. He is trying to start over, but his sadness drowns him into silence.

Rihan told Al-Monitor, “We talk about them all the time. It is important to talk about pain. I always tell him not to suppress his feelings, but how can he express a full life and such a deep sorrow in a few words?”

Hajj and Abu Jameh are both trying to avoid painful memories, but they are not the only ones remembering the tragedy of the war on its first anniversary. Hope seems nonexistent and many Gazans are now unable to see the light at the end of the tunnel amid the tightening of the blockade on the Gaza Strip, the monthslong closing of the Rafah border crossing, the Hamas-Fatah reconciliation hitting a snag and Gaza’s poverty rate reaching 39%, an 11% increase from 2013.