Lebanon has been without a president for over a year now, and sectarian sensitivities are at their highest. 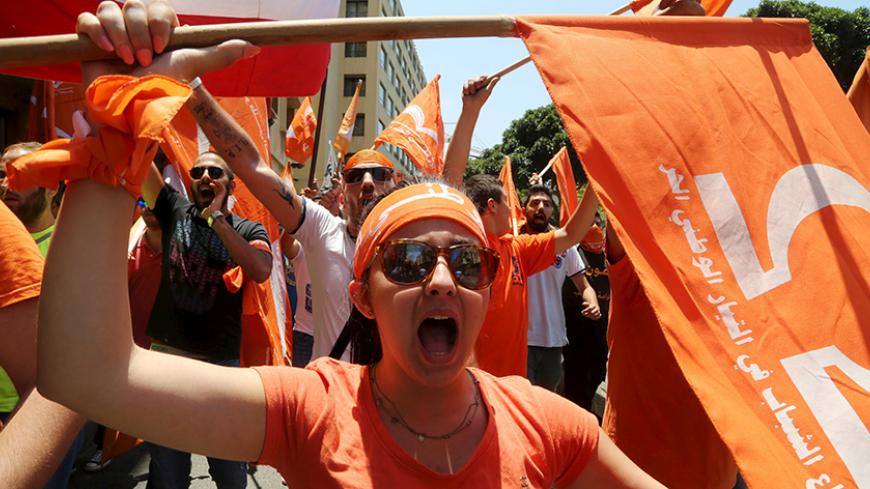 Supporters of the Free Patriotic Movement carry flags during a protest in Beirut, July 9, 2015. Hundreds of supporters of Lebanese Christian politician Michel Aoun protested in Beirut against Tammam Salam, the Sunni prime minister, whom they claim is marginalizing Christian influence. - REUTERS/Aziz Taher

BEIRUT — The government palace in the heart of Beirut swarmed on July 9 with security officers affiliated with the Lebanese internal security and the Lebanese army, clashing with demonstrators loyal to Michel Aoun, leader of the Free Patriotic Movement.

The main reason behind the clash is the rejection by the Lebanese Christian leader’s supporters of the manner in which Prime Minister Tammam Salam has been managing governmental affairs in the absence of the president.

Although seemingly one-dimensional, the background of the July 9 incident seems to be more complex and intricate.

The problem started July 9 when Salam’s government convened for its customary session. Soon after the start of the session, the media reported that Salam and Foreign Minister Gebran Bassil, one of the most prominent ministers in Aoun’s team, became involved in an altercation.

According to media reports, the Sunni prime minister tried to prevent the Maronite foreign minister from talking.

As the word spread, hundreds of Aoun’s supporters started flocking toward the government palace in Beirut to express their protest and to show solidarity with Bassil. The riot police arrived to the premises to disperse the crowd with force, which sparked skirmishes between the two sides, causing some of the demonstrators to be injured. For its part, the Lebanese army issued a statement saying that seven of its members were also wounded in the clashes.

This was what happened on the ground. Yet, there are some other political reasons that contributed to the incident. The disagreement within the government actually started weeks ago, as Aoun’s camp demanded the appointment of a new commander of the Lebanese army. From a legal point of view, current Commander-in-Chief Jean Kahwaji reached the age of retirement — 60 — on Sept. 30, 2013.

Back then, the government that was headed by Najib Mikati had resigned and was limited to managing day-to-day state affairs. Thus, it did not have full constitutional powers and was not authorized to appoint a new commander in chief. On July 30, 2013, the minister of defense took an exceptional decision to postpone the dismissal of the army commander.

Since the formation of the new government headed by Salam on Feb. 15, Aoun has been duly calling for appointing a new commander in chief, demanding that the issue be a top priority in the government sessions. Aoun’s ministers refused to discuss any other matter before the appointment of a new commander, which consequently led to the altercation July 9.

As per the Lebanese custom laws, the army commander in chief ought to be Maronite, which automatically makes the current head of the army a semi-permanent candidate for the presidential seat, which is also traditionally allocated to Maronites. Electing army commanders as presidents was not unconstitutional before the amendments on the Taif Agreement in 1990. Afterward, Article 49 of the constitution expressly stipulated that the candidates for the presidency have to be retired for two years before being entitled to run in the elections. This article was modified in 1998 for one exceptional time, which allowed the election of Emile Lahoud as president at the time. Afterward, the two-year retirement stipulation was completely disregarded when Michel Suleiman was elected in 2008, under the pretext that the presidential seat was vacant.

In fact, three commanders in chief have served as presidents throughout the history of Lebanon. First, there was Fouad Chehab, who was elected Sept. 23, 1958, following the end of the civil war that took place during the summer of the same year. Emile Lahoud was the second army commander to be elected president Oct. 15, 1998. For his part, Suleiman came to office May 25, 2008, after a presidential vacuum since Nov. 24, 2007, until his election.

Aoun’s opponents, the Future Movement, consider that he's seeking to appoint a new army commander to ward off any potential presidential rival, while his supporters deny such claims.

Aoun’s supporters, however, believe that the Sunni camp is trying to control the Christian role in the government and in managing the state’s affairs. Sunnis rejected the election of a president who represents the majority of Christians in Lebanon. This is not to mention their rejection of the electoral law, which allows Christians full power to elect their members of parliament. Currently, Christians are being denied the right to full participation in the running of government affairs in the absence of a president.

The current crisis is related to the balance of power between Christians and non-Christians in power and the extent of their involvement, marginalization and exclusion to the advantage of the Sunni prime minister position. This is a very complex dilemma in a country based on an intricate sectarian society.