Gas exploration in Lebanon has been in limbo for over two years, but with the renewed international efforts, will the file be reopened? 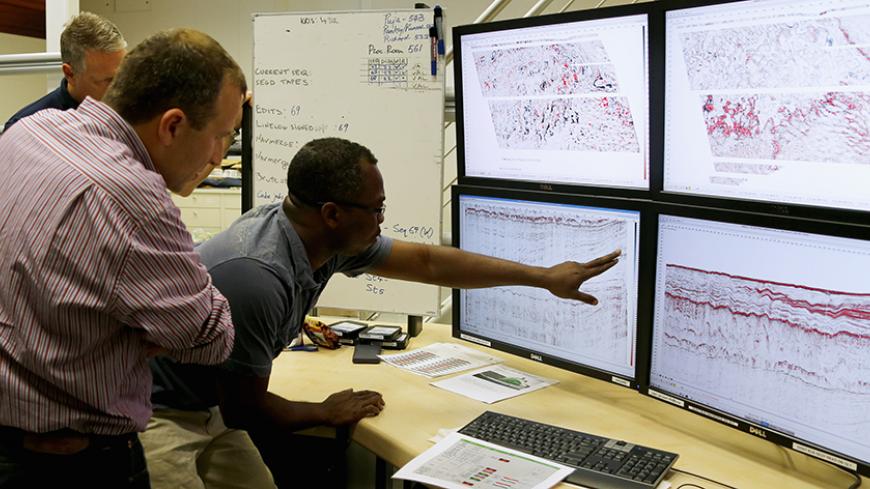 Energy Minister Gebran Bassil (L) looks at screens on board a boat during a tour of areas believed to have gas reserves off Lebanon's coast near Beirut, May 30, 2013. - REUTERS/Mohammed Azakir

BEIRUT — Gas exploration in Lebanon has been frozen for more than two years, but it has now returned to the forefront of Beirut's political and media scene. It was not brought to the table by any Lebanese government or official body, but rather by Washington.

On July 2-3, the US Department of State's special envoy and coordinator for international energy affairs, Amos Hochstein, visited the Lebanese capital, where he met with a number of Lebanese officials, including Prime Minister Tammam Salam, parliament Speaker Nabih Berri, Foreign Minister Gebran Bassil and Energy Minister Arthur Nazarian. Following these meetings, the US official made a series of press statements in which he stressed that the subject of his visit was limited to Lebanese gas, its exploration and excavation process and its current status.

A Lebanese ministerial source concerned with this issue confirmed to Al-Monitor that Hochstein’s talks focused in particular on two points. The first is the Lebanese-Israeli borders and the two countries' respective exclusive maritime zones. The second point covers the methods of dealing with gas exploration, extraction, investment and transportation in the Lebanese zone adjacent to Israel. The ministerial source, who preferred to remain anonymous, said these two points are still outstanding issues, after years of searching for a solution to settle them and following several attempts by the US official previously in charge of this issue, Frederic Hof. The source pointed out that Hof had made several visits to Lebanon and Israel to reach a settlement of the maritime boundaries issue between the two countries.

The ministerial source indicated that following Hof’s efforts, this controversial issue (the area where gas would be explored) was restricted to a maritime zone of ​​about 900 square kilometers (347 square miles). Lebanon considers this area as falling under its maritime sovereignty, and Israel considers it a disputed area in accordance with international law.

Hof had tried to reduce the mentioned maritime border dispute to a surface area of around 300 square kilometers (115 square miles) by submitting proposals on forms of joint operations between Lebanon and Israel over this surface area. This was rejected by the Lebanese authorities due to the state of hostility between Lebanon and Israel. In his recent visit, Hochstein tried to bring up this proposal again, inquiring about any developments in the Lebanese position in this respect. However, the source asserted that Hochstein failed to obtain any new results from the Lebanese side.

Bassil — the energy minister until he became foreign minister in February 2014 — told Al-Monitor that Hochstein’s visit was welcomed by him as well as by various Lebanese government entities. He explained that this visit revived an issue that he handled when he was energy minister in June 2011. Bassil told Al-Monitor that he drew the US official’s attention to the fact that the two points he came to Beirut to discuss are not the reasons why the Lebanese gas file is suspended today.

Bassil said he explained to Hochstein that the Lebanese Ministry of Energy, until the end of Bassil’s mandate in February 2014, had accomplished more than 80% of the maritime survey of Lebanon’s exclusive zone, of a surface area of about 21,000 square kilometers (8,100 square miles) without reaching the disputed area with Israel — whose surface does not exceed 5% of the Lebanese zone. He told Al-Monitor, “Lebanon had started the maritime survey of its potential oil and gas resources. The initial results were very promising. The Ministry of Energy completed the initial procedures to launch the international tender on Lebanese gas exploration in the Mediterranean Sea.”

Bassil stated that the Lebanese maritime area was divided into 10 blocks, the final draft of the Exploration and Production Agreement was drafted, and 43 companies — including major specialized international companies, such as Shell, Exxon Mobil and Total, among others — were taking part in the tendering process. Bassil told Al-Monitor he reminded Hochstein of what the US administration has known since the time Hof was in charge, which is that eight out of the 10 maritime blocks are far from the Lebanese border with Israel, and only two are adjacent to these borders.

Therefore, the exploration and investment process was supposed to kick off in 80% of the Lebanese zone starting August 2013 without any obstacles or impediments, had former Lebanese Prime Minister Najib Mikati not resigned. However, the entire process was stalled when Mikati submitted his resignation March 22, 2013.

This occurred a few days before Mikati’s government was supposed to ratify the last two decrees necessary to launch the international tender. These decrees concern the delineation of the maritime blocks and the approval of the Exploration and Production Agreement. Bassil explained that after this period, Lebanon entered into a vacuum period until the formation of Salam’s government on Feb. 15, 2014, and the whole process has been frozen for 11 months.

According to Bassil, the surprise came after the formation of Salam’s Cabinet that failed to approve the required decrees. The new government took the initiative April 2, 2014, to establish a ministerial committee tasked with re-examining the mentioned decrees. After more than a year and three months since the formation of that committee, the mentioned decrees have yet to be passed. This practically led to the suspension of all of the Ministry of Energy’s achievements.

Bassil added, “The US official realized that the border issue with Israel is not what impedes this very vital project for Lebanon, but that rather it is the legal Lebanese government that is delaying [the fulfillment of] its legal requirements and is not completing its necessary procedural frameworks.”

Why this delay and what are its causes? Bassil refrained from answering this question.

“I hope the US move would revive the file of the Lebanese gas and remind the concerned parties of the need to safeguard the interests of Lebanon and the Lebanese,” Bassil said.