While Iran has been a strong supporter of the Palestinian group Hamas, a trip by its leaders to Saudi Arabia has drawn warnings from Iranian politicians. 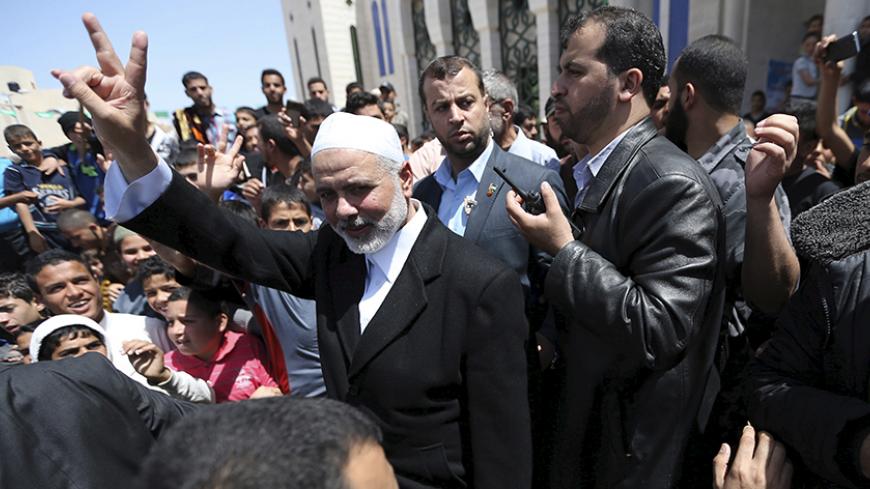 Support for Palestinian groups has been one of the unchanging principles of the Islamic Republic since the 1979 revolution. Iran’s support for various Palestinian groups and figures has ebbed and flowed with the changing political realities of the region but has never dropped off completely. In his latest speech, Supreme Leader Ayatollah Ali Khamenei, who has the final say on the country’s foreign policy, said that even with a nuclear deal, Iran’s support of “resistance groups” would continue.

However, it is no secret by now that since the unrest in Syria began in 2011, relations between Hamas and Iran have deteriorated. Iran pushed the Sunni militant group to politically back its ally President Bashar al-Assad, while Hamas was on the defensive, denying accusations of supporting Assad’s armed opposition. Relations between Hamas and Iran have not recovered since Hamas leader Khaled Meshaal left his longtime base in Damascus in 2012 for Qatar, one of the main sponsors of Assad’s armed opposition.

There were rumors in the Iranian media that Meshaal would visit Iran and meet with Khamenei, but those rumors failed to materialize. It is understandable then that when Hamas leaders, including Meshaal, visited Saudi Arabia and met with King Salman bin Abdul-Aziz Al Saud on July 18, the Iranian reaction was swift.

Perhaps the strongest criticism came from Reformist Ghanoun newspaper in an article by Saman Saberian, “Hamas: Bank account in Tehran, stronghold in Riyadh.” Saberian wrote that Hamas’ turn to Saudi Arabia cannot be viewed as merely seeking Saudi funding and help because in the latest war, “The Saudis helped Tel Aviv the most and the only support they gave to Gaza was coffins for the martyrs.”

The article touched on a rumor circulating in the Iranian media that Meshaal would send fighters for Saudi Arabia's war in Yemen. Saudi Arabia is three months into a bombing campaign of Ansar Allah forces, which it claims are backed by Iran. The multi-sided war has been a humanitarian catastrophe in Yemen. Saberian acknowledged that no one has confirmed the rumor of an agreement between the Saudis and Hamas, but Iranian reports citing anonymous Saudi sources have said that Saudi Arabia has requested special Hamas forces trained in the same military tactics as the Lebanese group Hezbollah to combat Yemen’s Ansar Allah. Whether the rumor is psychological warfare or not, it reveals how tense the region and how heated the rivalries have become.

Saberian wrote that it was noteworthy that Hamas leader Ismail Haniyeh thanked Saudi Arabia for its “natural” and “brotherly” help for the “national Arab” cause of Hamas, especially considering that the Iran-Saudi cold war is at its peak right now. Iranian parliamentarian Mohammad Ismael Kowsari told Ghanoun, “Hamas has made these mistakes in the past and did not learn the lesson from Syria.” The former Islamic Revolutionary Guard Corps commander and current member of parliament’s National Security and Foreign Policy Committee added that Hamas should know that Saudi Arabia would never help the Palestinians get their rights.

Asked what this trip by Hamas means for Iran-Hamas relations, Kowsari said, “The Islamic Republic of Iran will tolerate these actions and at the appropriate time will make a decision that will be in the interest of the oppressed people of Palestine.” Other parliament and National Security and Foreign Policy committee members interviewed by Ghanoun echoed Kowsari’s statements, calling Hamas' decision a “mistake.” Though no official said Iran would cut ties with the group, these are perhaps the strongest warnings to the longtime Iran ally heard in many years.

Ghanoun’s coverage of a sensitive issue such as Palestine is also interesting within an Iranian context. Iran’s conservative media, which has been historically more supportive of Palestinian groups supported by Iran, particularly Hamas and Islamic Jihad, has not reacted as harshly as the Ghanoun article. Reformist media outlets, which typically have a more nuanced view toward support of Palestinian rights and Israel, must have also enjoyed pointing out that the economic and political cost of supporting Hamas after so many years has failed to produce a reliable ally.