Iranian diplomats have said they will continue talking until an agreement is reached or it becomes absolutely clear that one is not possible. 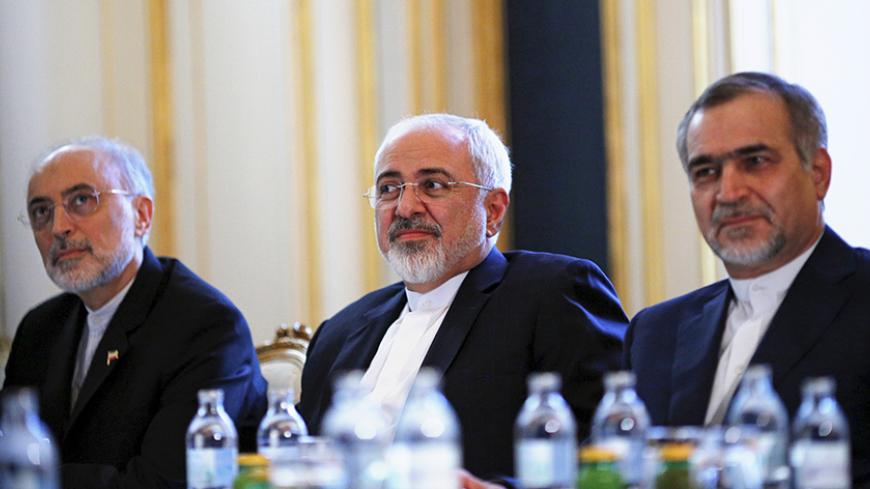 ​Negotiators at the Vienna talks on Iran's nuclear program are close to an agreement, but have run into problems concerning implementation. The main sticking points are not singular problems, but linked issues that to each party appear to be incompatible. Iranian negotiators have indicated a willingness to talk as long as necessary as long as there is progress and an agreement appears to be within reach.

An Iranian official source who requested anonymity told Al-Monitor, “July 9 doesn’t mean anything to Iran. It’s an American problem that should be solved by the Americans.” He explained that Iran’s main problem is getting the sanctions lifted and asserted that Tehran would exert as much effort as possible to obtain a satisfactory resolution. He reiterated, “Our strategy is not bound by a time limit. It’s either a good deal, or we leave, but we won’t leave until after we arrive at the conclusion that a deal is impossible.”

The negotiations between Iran and the five permanent members of the UN Security Council plus Germany (P5+1), originally scheduled to end June 30, are now continuing beyond their extended deadline of July 7. A Russian diplomat told Al-Monitor that the talks had become tense hours before the deadline.

“On one main issue, a Western minister looked at [Iran Foreign Minister Mohammad Javad] Zarif and said he would be withdrawing. Zarif stood up and told him, ‘If you want to withdraw just leave, but learn not to threaten an Iranian,’” the diplomat said. “Silence fell around the room until [Foreign Minister Sergey] Lavrov added, ‘And a Russian.’”

Iran’s ballistic missile program is the source of one problem that emerged in the past few days. UN Security Council Resolution 1747 imposed military restrictions on Iran, in particular concerning weapons transfers. The 2007 resolution declares, “Iran shall not supply, sell or transfer directly or indirectly … any arms or related materiel.” It also calls on other countries to “exercise vigilance and restraint in the supply, sale or transfer” of certain weapons to Tehran.

An Iranian diplomat speaking on condition of anonymity told Al-Monitor, “They want to bring the issue of ballistic missiles into the talks. They want to put limitations on activities related to the missile program. They say that's part of the UNSC resolution. They want to put some caps on conventional weapons.” He also explained, “We didn't accept this from the beginning. We rejected it and said it’s not part of the UN resolution and not part of the deal, and this shouldn’t hinder progress on other main issues. I’m sure this won’t stop us from reaching a deal.”

According to the Iranians, there are still several other issues to finalize, including the text of the UN Security Council resolution on lifting sanctions to be issued directly after the deal, before announcing agreement. Drafting the text has been time consuming, with Iran insisting on certain words that can't be misinterpreted.

“This is due to the bitter experience after the framework in Lausanne,” said the Iranian official source, referring to the media war over the specifics of the framework agreement announced April 2. “If there’s a need to consult language experts, we won’t hesitate to do it.”

The official source also emphasized that a nuclear deal is important to Iran, the region and the world and is becoming even more so with each passing day. “This is because of the threats this region is facing and the common threat that all the nations are facing, which is terrorism and extremism,” he said. “It’s a fact that the Middle East today is going through one of the most dangerous phases since the First World War, and many believe that the threat [the Islamic State (IS)] and its ilk pose to the region and the world is greater than we may think.”

A European diplomat agreed with the Iranian's assessment that there’s a real global threat with hundreds of European jihadis crossing borders back and forth. “In Europe, this is becoming an imminent threat. It’s not only about those leaving; it’s also about those coming back or trying to find their way back.”

According to the European, who knows the Middle East and served as an ambassador to Syria for three years, “A deal with Iran could help find a real partner in the war on terror. This time, the war is a matter of consensus among the international community, and Iran showed during the past year a real seriousness in combating this phenomenon, mainly because of the level of threat it poses to it.”

Although a deal might currently still be hindered by differences, many believe it is important that the United States and Iran put their differences aside and prioritize their objectives. The two countries have viewed each other as rivals during the past 3½ decades, but they do not consider the other an existential threat.

“The world, as we know, is under a serious threat,” said the Iranian official source. “The region is being remapped by a group of lunatics that claims to be raising the banner of Islam. This is not true. If we don’t join forces to combat them, then the new world map might have a huge black spot on it — [IS'] land — and who knows how far the borders of this spot will extend.”