Gazan society comes together on stage

A recent play in Gaza, produced by a liberal director of modern works and the Hamas-affiliated Palestinian Artists Association, gives hope for a revival of an inclusive theater scene in the Gaza Strip. 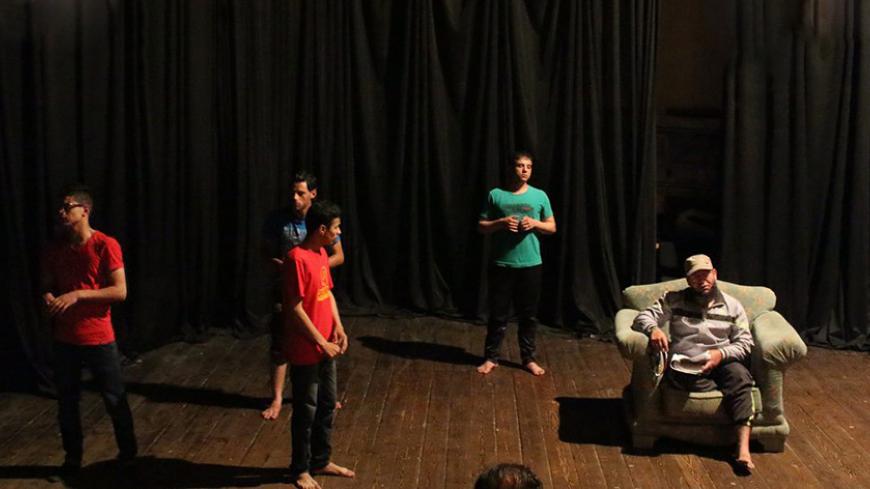 GAZA CITY, Gaza Strip — “You are innocent, O Rabih. You are innocent, O Rabih,” the crowd shouted at Rabih, a character in his 20s who for an hour and a half on stage at the Holst Cultural Center in Gaza City represented the Arab citizen, who faces injustice on the street, at work, at home and in prison. “Rabih al-Arabi” ("Arab Spring"), the play directed by Issam Shaheen, may have had some poorly staged scenes, but they were all rich in symbolism. The young Rabih (Spring in Arabic), played by Majed Antar, represents the Arab Spring, which security services and ruling Arab regimes seek to crush.

A cast of more than 20 actors appeared in scenes set in a prison, house, psychiatric clinic and religious hospice. They all played their parts to perfection, greatly entertaining the audience, some in tragic roles and others with great comedy.

The play’s dialogue features Egyptian, Syrian and Palestinian accents, in reference to the countries of the Arab revolutions. The play also touches on the tyranny of security services in Arab countries, amid cheers of the slogan of the Egyptian revolution, “Bread, Freedom and Social Justice.”

The experimental play has a mobile set, and the plot plays out over a number of scenes, a technique favored by Shaheen, who counts the Egyptian playwright Lenin al-Ramli among his influences. Shaheen had been absent from the theater scene for four years before making a comeback June 20 with “Rabih al-Arabi,” a move he did not actually plan.

The play started out as a professional training course for actors organized in April 2015 by the Palestinian Artists Association, which had been founded in 2010 under Hamas rule. As a collaboration, the play is the first of its kind, involving a director of liberal and modern theater plays and an association that typically offers classical Islamic works. After disputes between directors, poets and novelists on one side and cultural institutions close to Hamas on the other, this play could be the beginning of a national and political reconciliation of sorts.

A duality of performances and discourse was easily identifiable in the production. The symbolism was strong in the play, but the direct, boring, rhetorical and ideological discourse of some scenes lost the audience's interest.

Shaheen said that during the training, he had gathered actors from leftist, Islamist and liberal orientations, which in part explains the differences in performance. Some of the actors were accustomed to the Islamic theater, and “Rabih al-Arabi” was their first experience with an experimental production that relies on movement and sometimes shocking the audience.

Regarding his first experience with the Palestinian Artists Association, Shaheen said, “There were no problems at all. As long as the goal is art and theater, there are no specific agendas.” Omar al-Rai, the head of the association, told Al-Monitor that his organization did not check the director’s or the actors’ affiliations. The objective was to create something. “We wanted to benefit from the director’s distinctive and modern expertise. The rehearsals served as a workshop open to everyone,” Rai said.

Shaheen’s absence from the theater scene had been due to the lack of funding for culture in Gaza. Theater has for a time had to rely on the funding of women's and human rights organizations concerned with the issues of the marginalized, such as children, disabled people and women.

Novelist and playwright Atef Abu Saif told Al-Monitor, “Palestinian theater is not based on national financial capital. The national budget does not invest at all in culture and theater. Thus, it depends on the support of institutions that focus on women's and human rights, rather than politics.”

Abu Saif pointed to an absence of strong screenplays, stressing that the Palestinian political division has affected theater, with the former Hamas government having imposed restrictions on it, such as banning participation by women. “Meanwhile, we all forget that the theater is the only real-time art, based on the moment itself, and can treat several crises and issues, most importantly the societal and political division,” Abu Saif said, alluding to the ability of theater to guide and influence public opinion.

Actor and director Jamal Abu al-Komsan recalled the play he directed five years ago, “Game Over,” with the help of local funds. Komsan said the Palestinian Authority and the Ministry of Culture in Ramallah lacked a plan for supporting theater in Gaza. Shaheen believes the political division and the siege on Gaza are the main reasons behind the decline of theater in Gaza. He said, “In our recent play, we did not think of Fatah or Hamas or who was a Muslim or a non-Muslim. We served art, and without any funding, we offered something different. We have benefited from each other’s different expertise, whether they were Islamic or liberal.”

Rai spoke of the lack of official support and appreciation for art in Gaza today. “When we ask for support for culture or theater, the only response we get is that people are still suffering the repercussions of war, so how can we offer support for art?” he said. His association had in the past held a number of arts festivals.

Perhaps theatrical works in which the financier does not interfere in determining the subject are the exception. Nonetheless, “Rabih al-Arabi” gives hope for reviving the theater scene without the need for government funding and with cooperation between the cultural Islamic and liberal trends. The play’s ending is tragic and full of sarcasm-laced contradictions, with Rabih’s innocence unable to save him. The crowd staged behind shouts, “In prison, there are no innocents. …There are only evil-doers.”