Gazans are thrilled about the new theme park, Dinosaur City, as they lack educational and entertainment opportunities that allow them to forget about their harsh living conditions. 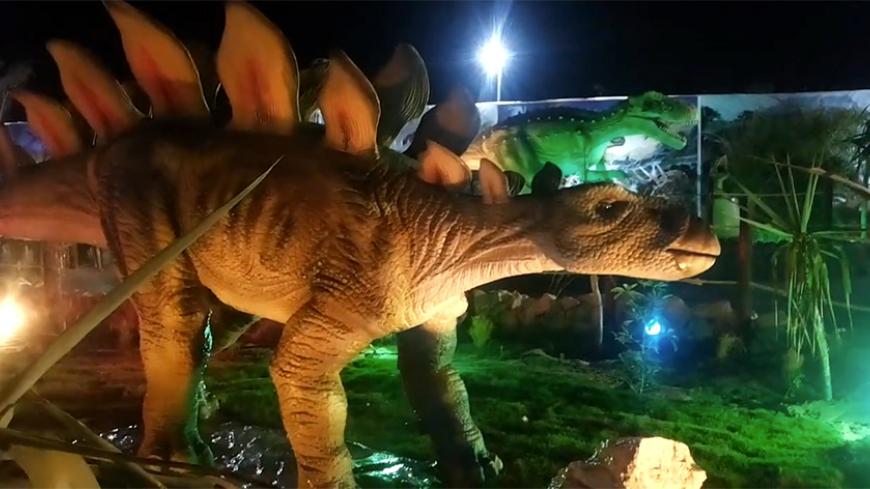 An animatronic stegosaurus is seen on display at Dinosaur City in the Sharm Park amusement park in Gaza City, June 4, 2015. - Facebook.com/Sharmpark

AL-ZAHARA, Gaza Strip — At Dinosaur City, the first theme park of its kind in the Gaza Strip, and in fact in all of Palestine, the sounds of its prehistoric creatures can be heard from a distance. A dinosaur head is displayed above the entrance gate to the park, in which the park's visitors are treated to an experience of what these extinct creatures may have looked and sounded like.

Dinosaur City is part of Sharm Park, which is one of the largest and most developed of the few theme parks in Gaza, and built on a small area of only 1,000 square meters (0.25 acre) south of Gaza City. According to the theme park's management, Dinosaur City is visited by between 150 and 200 people per day.

The model dinosaurs are made out of metal that is covered with a spongy material and leather; they are fitted with internal sensors that make the large creatures move and make a sound when people approach. Each dinosaur is identified by name and type, as well as the period in which it lived.

Abdallah Joudeh, the park’s manager and guide, told Al-Monitor that the main purpose of building the theme park was to establish a link between what students learn in school and an entertaining experience. He said that Dinosaur City was developed after a number of engineers saw similar projects around the world.

Those in charge of the park did not comment on its building costs, since Dinosaur City competes with other theme parks in Gaza, such as Asdaa City and Kids Land.

Joudeh said that the Israeli authorities had confiscated in mid-March special equipment for the park’s construction; it was held up for two months in the Israeli Port of Ashdod and for another two weeks at the Kerem Shalom crossing — the only commercial crossing with Gaza. No explanation was given for the confiscation of the equipment, and thus those in charge of the park endured major losses, another issue the project’s owners refused to comment on. Israel released the equipment in mid-May, and construction resumed. Dinosaur City opened in June.

“When we began studying the project in the winter of 2014, we found that there are 250 groups of extinct dinosaurs. We selected 10 major groups — such as Ceratosaurus and Maiasaura — and picked one creature from each group to be exhibited in the park. We sent prototypes to German engineers who specialize in creating models for movies at a factory located in Chicago. They built them based on international standards in three months,” Joudeh said.

Joudeh said tickets are reasonably priced: adults pay seven shekels (around $2) and children pay three shekels (around $1) to enter the park. He also said that next year, the site will be much more developed and bigger with more on offer for visitors.

Miram Younes, 11, who was visiting the park, told Al-Monitor, “They told us a bit about dinosaurs at school and I’ve read many stories and watched several movies about them. But it’s a whole different thing to see these models here in the park. This is the second time I come here in a week, and I hope to keep coming back.”

She added, “The sound effects and the moves these creatures make, make you think they are alive. They are different [here] from how they are portrayed in movies — being scary. In fact, they look fun and you can never get bored of looking at them."

Ahmad Bardawil, a government employee, told Al-Monitor, “A park like this is a great step forward in the entertainment aspect of theme parks in the Gaza Strip. It was difficult to imagine such a park to be opened in Gaza due to the siege and a lack of capabilities and materials.”

Bardawil said that he was very happy when he saw these creatures come to life in the park, because he had only ever seen them in his favorite movies.

Medhat al-Zatma, deputy head of the social committee at the Ministry of Education, believes the park is important for the entertainment and scientific fields, as it involves creatures that have lived throughout a large part of history.

Zatma told Al-Monitor that students are more likelly to retain what they are taught in school about dinosaurs after visiting Dinosaur City, as well as experiencing a thrill — for students and adults alike — to see the creatures they have always only imagined.

Zatma said that when what is taught in schools can be seen or experienced in real life, it makes it easier for students to understand and retain information, and therefore he welcomes schools organizing field trips to the park.

Theme parks such as Dinosaur City allow Gazans to forget — for a short while at least — about their harsh living conditions, as many can't travel to places other than Gaza's beaches and a few other theme parks to escape the daily stress caused by the Israeli blockade and the aftermath of the war in July-August 2014.