Harsh criticism has been leveled against soccer player Ahmed Marghany, who publicly blamed President Abdel Fattah al-Sisi for the violence in Sinai, in what some see as a violation of the freedom of expression. 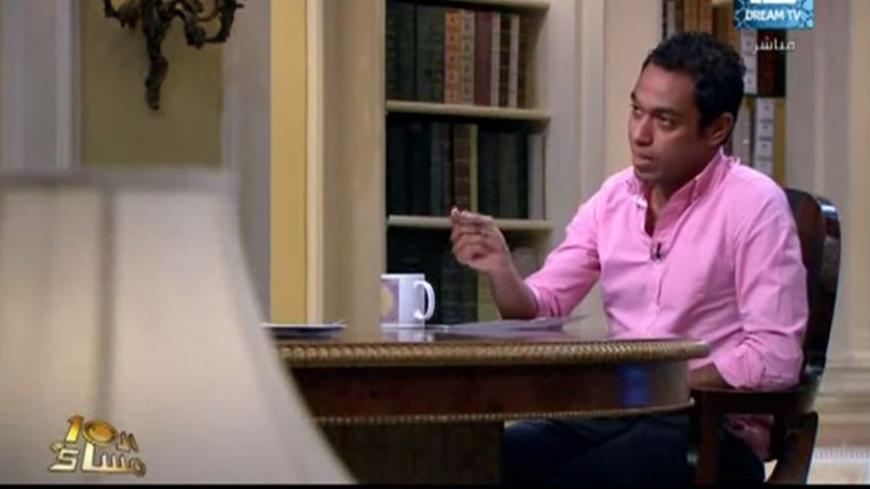 Egyptian soccer player Ahmed Marghany speaks about his dismissal from his team in an appearance on Dream TV July 3, 2015. - Youtube/Dream TV

CAIRO — Egyptian military forces in the Sinai Peninsula were targeted June 30 in a series of bloody attacks by Wilayat Sinai, previously known as Ansar Bayt al-Maqdis, an affiliate of the Islamic State. The attacks claimed the lives of 17 soldiers, the General Command of the Armed Forces said July 2.

Grief led an Egyptian soccer player for the Wadi Degla Sporting Club, Ahmed Marghany, to publish a post on his Facebook page the same day, addressing Egyptian President Abdel Fattah al-Sisi with sharp-tongued criticism. Marghany wrote, "You asked people to take to the streets and support you in fighting terrorism. They filled the streets, although this is your job and you need no authorization. Ever since, civilians, soldiers and policemen have been dying. Where do you stand in all of this?"

Marghany added in the same post, "All we get from you is mere talk. You are a failure and you are responsible for all the bloodshed in this country. Is a state of mourning not going to be declared for them and are the television soaps not going to be canceled? Or are they not as important as the state prosecutor?”

The post did not go unnoticed. On July 3, the Wadi Degla Sporting Club decided to officially terminate Marghany’s contract as of the beginning of next season. The club’s board of directors also froze his membership — and his salary — and kept him off the playing field.

Speaking to Dream TV on July 3, Marghany confirmed the news, saying that the club informed him of the contract termination, leaving him free to join another club.

The Facebook post rippled among both supporters and opponents of Sisi, creating controversy. Those known to be hard-line Sisi supporters heaped insults on the soccer player. In a phone call during Marghany’s interview on Dream TV, the president of the Zamalek Sporting Club, Murtada Mansour, used racist expressions against the dark-skinned Nubian player, calling him a servant and a concierge.

Following the insults leveled against Marghany, the hashtag #Support_Marghany became the most popular in Egypt, further igniting tensions.

The General Nubian Union — which speaks on behalf of Nubians in Egypt and defends their rights —supported Marghany and issued a statement July 4, reading, "We followed up on the phone interviews, which the show producers and host used to instigate public opinion against the player, describing him as a traitor to the homeland and pro-Muslim Brotherhood. With a desire to make the show more appealing and to further ignite the dispute, the producers brought on the president of the Zamalek club, who is known for the rotten and stinky words he utters against anyone who does not comply with his personal interests or that of the regime under which he kneels."

Amr Abu Zaid, a lawyer for the Ultras club assigned by the General Nubian Union to this case, lodged a claim July 4 with the prosecutor general, Ali Omran, against Mansour, accusing him of verbally assaulting Marghany.

The presidency issued a statement July 5 saying that Sisi will not become involved in this issue, adding that the president does not welcome the punishment of anyone for their political opinions.

For its part, the Wadi Degla club issued another statement July 5, stating, “The club’s board decided to suspend the player during the game with al-Ahli club because he violated the club’s rules and regulations that prohibit mixing sports and politics, and not because the club mixes politics with sports. The player was not listed off or taken out, and in fact his contract ends at the end of this season. The club’s board rejects the verbal abuse hurled against the player, whether through cursing or accusations, because such things do not represent sports or humanity.”

The former vice president of the Supreme Constitutional Court of Egypt and current head of the Republican Alliance Party, Tahani al-Gebali, condemned the incident. She told Al-Monitor that what happened was a flagrant violation of the constitution, which allows any citizen to express their political opinions, as long as it is done peacefully, adding, "The Egyptian constitution prohibits discrimination against any citizen on the basis of religion, race or color. The Nubians are an integral part of Egyptian society. They have rights and obligations."

She added that political hypocrisy can have serious consequences. According to her, the enemies of the Egyptian state can use these situations to show that Egypt is sagging under oppression and a limited margin of freedom of expression.

Hassan Nafeh, head of the faculty of economics and political science at Cairo University, told Al-Monitor that Egypt's political and social landscapes changed after the June 30 Revolution and there are now three groups in Egypt. There are pro-Sisi supporters who do not tolerate criticism and others who believe the June 30 Revolution to be a coup d'etat.

"The third group, which constitutes the majority, supports neither Sisi nor the Muslim Brotherhood. This group wants to preserve the homeland without knowing how. Every time someone utters a word, he is considered a traitor or a terrorist. The presidency should completely disown those harming the regime. … With their irresponsible words and acts, they are pushing this group into developing animosity toward the regime," Nafeh said.

The presidency ought to ignore those seeking attention and avoid responding to the criticism leveled at it, because doing so harms itself more than its harshest enemies could.