Amid the worsening living conditions and employment opportunities, doctors in the Gaza Strip take German classes to apply for jobs in Germany, which provides many incentives for medical practitioners. 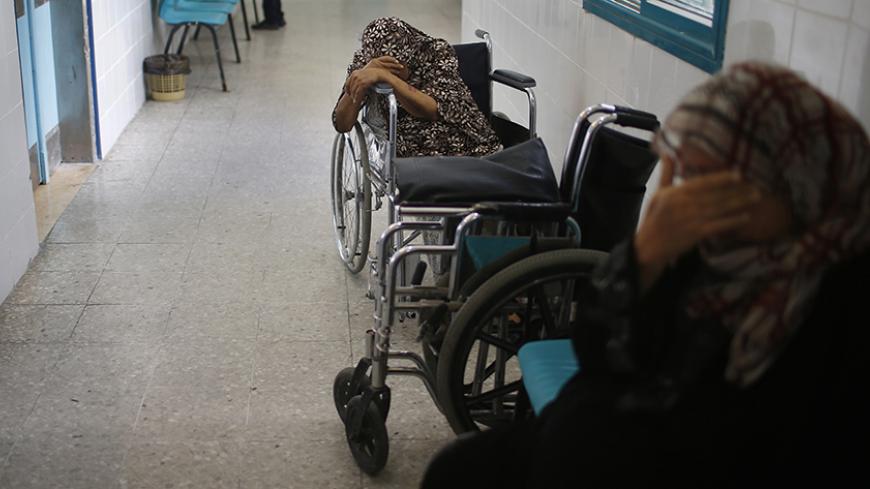 GAZA CITY, Gaza Strip — In one of the rooms of the Goethe Institute in Gaza City, 13 students attend a German-language class. Five of them are doctors seeking to study and work in Germany due to the tough economic and political situation in Gaza, which has been under Hamas control for eight years.

According to figures published by several sources, some doctors employed in Gaza are looking for work in German hospitals. Germany has been offering extensive incentives for doctors from outside the European Union for years.

Afaf al-Saafin, a student at the Goethe Institute who works in the emergency department at Al-Shifa Hospital in Gaza City, said that she is studying German because it is a requirement to know the language to apply for a job in the medical field in Germany.

“I heard about this from friends who moved to Germany recently. They told me they managed to settle there and find work at good German hospitals, which encouraged me to consider this opportunity. So I quickly enrolled in a German-language program. I have reached level two, which qualifies me to [apply for positions] at [German] hospitals once I finish,” she said.

She added, “I [hope to] first head to Germany as a visiting doctor in one of the German hospitals. This will help me communicate [in German] with my fellow residents. Then I can get a contract and settle in Germany."

Doctors in Gaza faced tough times working in hospitals during the war in July-August 2014. Many of them did not receive their salaries, especially those who were appointed during the mandate of the former Hamas government, as was the case for other employees who received a modest part of their salary at irregular intervals.

Dr. Ramzi Mahdi, who works at a clinic run by the United Nations Relief and Works Agency for Palestine Refugees in the Near East and who received a medical certificate in 2013 from the Liaquat University of Medical & Health Sciences in Pakistan, is in the process of getting his paperwork ready to move to Germany and work there, after he receives his language proficiency certificate from the Goethe Institute.

“The situation in the Gaza Strip is quite tough. I work here and earn my monthly salary, but I can’t seem to find myself here. I am looking to settle in a place where I can fulfill my ambitions. I will only come to my home, the Gaza Strip, as a visitor, especially under the current circumstances,” he told Al-Monitor.

He added, “Some of my friends traveled to Germany. There is a general trend, particularly among young doctors, to travel abroad. I know at least 20 doctors who have recently moved to Germany. Others are taking language courses and are currently preparing their papers to leave."

Germany offers huge incentives for those in the medical field and helps doctors travel and work there. The German Ministry of Interior reduced the annual minimum wage that is required to get the EU Blue Card, the work permit for highly educated skilled workers, from 66,000 euros ($74,000) to 46,400 euros ($52,000) for regular jobs, and to 36,200 euros ($41,000) for jobs that face a shortage of qualified applicants, which includes scientists, mathematicians, engineers, medics and computer programmers.

The director-general of governmental hospitals in the Gaza Strip, Abdullatif al-Haj, however, said, “There is no such trend [of doctors moving to Germany]. I personally only know two doctors who have traveled abroad, and they are general [practitioners] rather than specialists.”

He added, “We cannot say that there is a trend of doctors traveling from Gaza to Germany. The blockade and the closing of [border] crossings that have been ongoing for years prevent many people wanting to travel from doing so. We have not reached a point where Gaza is deprived of doctors or where there is collective departure from it. On the contrary, we encourage general practitioners to travel to pursue their specialization abroad and return to work in Gaza. This has been our policy in the past. But the economic situation and the fact that 60% of doctors working in hospitals do not get paid on a regular basis is a main motivation to travel and [seek] employment stability. This is ultimately a personal choice.”

According to Haj, around 900 doctors work in 13 governmental hospitals in the Gaza Strip. Roughly 250 of them are specialists, while the others are general practitioners. There is a pressing need for doctors in Gaza to specialize in the treatment of less common medical conditions. Hospitals are making up for this shortage by referring tough cases to hospitals in the West Bank, Israel and other countries.

In the absence of official figures of doctors who have traveled to Germany or desire to do so, Al-Monitor contacted the German Consulate in Gaza. However, the office refused to disclose any figures.

A source at the consulate in Ramallah told Al-Monitor on condition of anonymity that visa applications are growing in the Gaza Strip, especially after last summer’s war.

“The consulate receives hundreds of visa applications monthly from the Gaza Strip. Doctors constitute no less than 35% of the applicants, but some of them could not travel due to the closing of the Rafah crossing with Egypt and the limited possibility of travel through the Erez crossing with Israel,” the source said.

Lubna al-Nabulsi, the person in charge of the Goethe Institute in Gaza, said that there is an increased demand for German-language classes among medical students and doctors wanting to study and work in Germany, or to join their families there.

“We teach four classes at a time, and 10 to 18 students attend each class. There are at least 50 students on the waiting list for the next round of classes. I do not have a rough estimate of the number of doctors who took classes in the past, but I can say that it is a large number,” she said.

The security, political and economic situation in the Gaza Strip is distressing many Palestinians who would rather emigrate and settle in a country where they can enjoy more stability. However, the immigration of highly skilled workers such as doctors might further complicate and worsen the situation in Gaza in the coming years.