The longstanding tension between Fatah and Syria seems to be easing on a number of fronts through cooperation between Palestine and the Syrian regime. 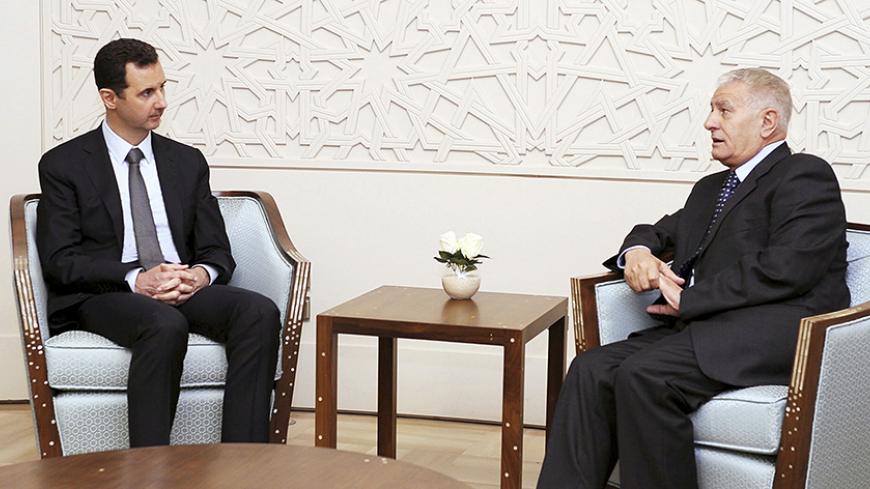 RAMALLAH, West Bank — The Fatah movement and Syria have opened a new chapter of bilateral relations and have agreed upon the reopening of the Fatah movement's offices in Damascus, although particulars have yet to be worked out. In 1983, several Fatah members, led by secretary-general of the central committee of Fatah al-Intifada, Said Musa Maragha (mostly known by his nom de guerre, Abu Musa), defected from the movement, took control of Fatah offices in Syria and founded Fatah al-Intifada in Damascus.

Noteworthy is that relations between the movement and Syria before the 1983 dissension had witnessed a long period of tug of war — rapprochement at times and estrangement at others.

A 32-year breakup between Fatah and Syria began in 1983 when members of the Fatah movement defected and took control of the movement’s offices with the help of the Syrian regime. The breakup continued with the signing by the PLO of the 1993 Oslo Accord with Israel on Sept. 13, which Syria rejected and condemned back then.

The Fatah-Syria relationship is now witnessing a detente against the backdrop of the intensification of the fighting in Syrian cities — which has reached the Palestinian refugee camps, host to an estimated 650,000 refugees — in an attempt by Fatah to spare the refugees the scourge of the fighting and to help them return home after their displacement. This is happening through coordination with the regime and the Syrian army.

Abbas Zaki, member of Fatah’s central committee, headed a delegation that visited Syria May 28 that included the secretary-general of Fatah's Revolutionary Council, Amin Maqboul, and chairman of the Financial Control Committee, Omar al-Hroub. Zaki told Al-Monitor that several issues were discussed with the Syrian side, notably the alleviation of the suffering of the Palestinian refugees in the Syrian camps, many of whom were attacked by militants.

He indicated that part of the Yarmouk camp is still occupied and most of its 650,000 refugees were displaced after losing their places of residence. “Based on our commitment to alleviate the suffering of refugees, we focused in our discussion on how to bring them back to the camps liberated from Jabhat al-Nusra and the Islamic State, such as al-Sabina and Hosseinieh camps,” said Zaki.

Al-Monitor learned from a source from the Fatah delegation to Syria, who spoke on condition of anonymity, that the delegation met with Syrian National Security Bureau head Ali Mamlouk, Syrian Interior Minister Mohammed al-Shaar and Syrian Deputy Foreign Minister Faisal Mekdad. A number of matters were discussed, according to the same source, most notably the bilateral relations between Fatah and Syria, the Yarmouk refugee camp, the reopening of the movement's offices in Damascus and the restoration of the movement’s properties and real estate in Syria. The delegation also met with officials from 14 Palestinian factions in Damascus.

Zaki said although Fatah’s relationship with Syria had been rigid in the past, it was never uninterrupted because the movement was present in Syria in one way or another, although not in an official manner. He said, “Our Syrian brothers were convinced that Fatah cannot be subordinated to a specific faction or organization, and thus Fatah was given the right to exercise its role just like the rest of the Palestinian factions.”

For his part, Maqboul told Al-Monitor, “The restoration of the relationship between Fatah and Syria came following the political stance taken by President [Mahmoud] Abbas stressing the need to solve the Syrian problem through dialogue rather than military intervention, which the Syrians deemed a positive stance, which urged them to communicate their satisfaction to the [Palestinian Authority (PA)].”

Abbas announced on more than one occasion that the solution to the Syrian crisis is political and lies in dialogue, and information was leaked about Abbas’ positive role in the Geneva II conference held to find ways to resolve the Syrian crisis. Moreover, Abbas had sent delegations to Syria on more than one occasion to hold talks with some of the Syrian opposition parties there and to study the possibility of initiating political dialogue.

Maqboul added that the visit of the Fatah delegation was successful as the Syrian side promised to look into the issue of Palestinian detainees and release all those who are found not to have any relationship with the fighting; to enable the displaced refugees from returning to their homes after the return of calm; and to provide in-kind assistance to them, to agree to reopen the movement's offices and form a committee to follow up on the movement’s real estate and property, in addition to appointing Hamas representative in Syria, Samir Rifai, to cooperate with the Syrian government on all of these matters.

Palestinian writer and political analyst Jihad Harb told Al-Monitor, “The recent visit of the Fatah delegation to Syria revealed that the movement hopes the Syrian regime takes care of Palestinians and their camps in Syria to protect them from assaults or attacks, especially in the Yarmouk camp.”

The PA has always stressed its belief that the only solution to the Syrian crisis is dialogue and coming to a political solution. Hamas’ position, on the other hand, has consistently remained unclear. However, both the PA and Hamas are against foreign military intervention in Damascus.

Maqboul added, “The Syrians have expressed their shock and dismay at the attitude of Hamas toward the crisis in Syria. They gave us information about the involvement of some Hamas members in the fighting in Syria.”

Zaki said, “Syria is a very important country for Palestine and the region. This is shown through the threats it is exposed to. We are aware that the collapse of Syria means the collapse of the Palestinian fort, which is why we are keen to preserve Syria and its unity.”

He added, “As a result of the situation in Syria and Yemen, our cause was no longer a priority for the Arab and international communities. This is what Israel is seeking to achieve through a major scheme in the region based on creating chaos.”

Harb believes Fatah’s relationship with Syria will not have an impact on the Palestinian-Palestinian relations. He explained that this convergence has no tangible impact in light of Syria's loss of its regional influence given its current situation. “The influence Syria enjoyed during its alliance with Hamas on internal Palestinian ties has been significantly undermined,” he said.

He added, “The only gain of the Fatah movement out of this relationship [with Syria] is to safeguard the Palestinian refugees in Syria and protect them as much as possible from potential attacks.”

Harb ruled out the possibility of Palestine benefiting from better ties with Syria at the regional level. He said, “I do not think that Syria in its current situation and in the coming period will have an active role at the regional level, because it will take it years to get back on its feet.”

Despite the importance of this relationship with Fatah and its presence in Damascus, the most important test remains the ability to exploit this relationship to save the remaining part of the Palestinian refugee camps and the refugees displaced by the fighting.