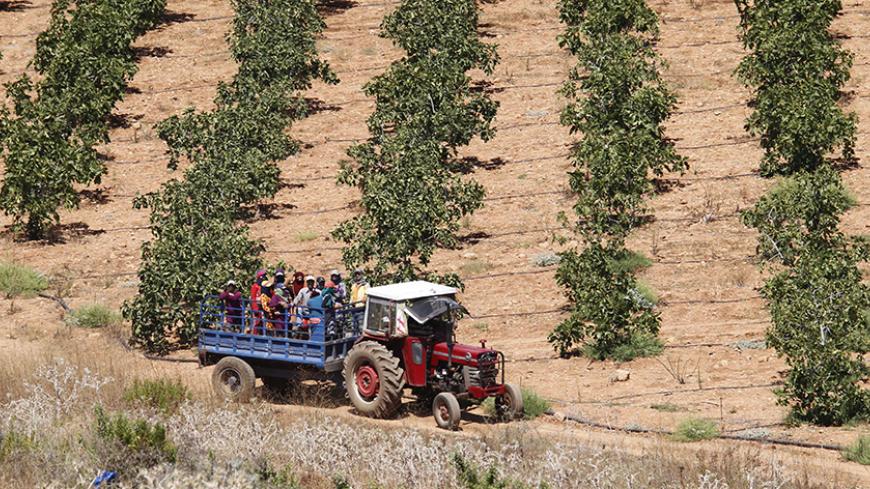 Syrian workers are seen on a pickup truck at an agricultural field in Wazzani near the Lebanese-Israeli border in south Lebanon, July 29, 2013. - REUTERS/Ali Hashisho

Australians Bill Mollison and David Holmgren developed the concept of permaculture in 1978 as a creative design process bringing together knowledge, culture, habitats, and human and agricultural systems in the creation of a natural ecosystem. In 2014, the organization SOILS: Permaculture Association Lebanon began implementing permaculture in the Lebanese countryside through workshops and other training for farmers and garden lovers.

Rita Khawand, a former actress, co-founded the SOILS community after winning a social entrepreneurship competition organized by the nongovernmental organizations Arcenciel and Beyond Reform & Development. Its purpose is to develop a more sustainable environment based on the cohesion of various elements.

Permaculture, which includes agriculture and permanent or sustainable culture, is a design science that brings together knowledge and culture, habitats and human agricultural systems. It employs principles of ecology and knowledge of traditional societies to ethically and responsibly reproduce the diversity, stability and resilience of natural ecosystems. According to Khawand, permaculture is necessary in Lebanon “to create, through a thoughtful and efficient conception, human communities that respect nature and man.”

Fadi Kanso, a Lebanese agricultural scientist, studied permaculture in Germany. Thinking that Lebanon really needs to reconsider the way it practices agriculture, he became a trainer at SOILS.

“Here, farmers use mostly monoculture. They don’t diversify a lot, which can be a management risk in case of a climate shift, for example. I know someone who lost four hectares [9.9 acres] of tomatoes in his greenhouses during the Zeina storm in January 2015, which damaged homes, electricity infrastructure, roads, ports and fields, especially in south Lebanon. He basically lost everything, but that could have been avoided if he had invested in different crops,” Kanso said.

He also criticized the “short-term thinking of Lebanese farmers.” He noted, “They need the money fast, so they don’t invest in the future. Diversification might be costly at first, but this is the only way to ensure long-term beneficial production.”

Kanso also told Al-Monitor, “Another issue is the chemicals they use. Most of the farmers use dangerous products because it’s faster and easier. They forgot how their families were managing only two generations ago, traditionally, in a natural way, by working together with plants and animals, like sheep and goats. We are disconnected from our agricultural land in Lebanon, and we lose around 15% of it every year, because it is so polluted from chemicals and is no longer fertile. We could lose everything in 60 years! To rehabilitate it, it will take a lot of time and money.”

Issues involving product quality as well as consumer health are also of concern. For example, the use of some chemicals reduces the natural levels of iron and magnesium in oranges and can cause health problem.

Al-Monitor was unable to reach the Lebanese Ministry of Agriculture for comment on these issues or potential uses for permaculture.

“If we use permaculture and diversify our production, we wouldn’t need chemicals, because insects and pests would face a crop that could kill them. By growing several kinds of crops, you considerably reduce the risks,” Kanso said. “When you do monoculture, you will attract the pest that is specific to your production. It’s like growing food for it! Permaculture is possible in Lebanon, because you have such a nice environment, already so many different plants. It’s possible to diversify very easily.”

Kanso, concerned about his country, said he got involved with SOILS “to start somewhere, through education, cooperation and awareness.” He was one of several teachers for a 16-day workshop held Feb. 2-19 in Qoussaybe, in south Lebanon, in cooperation with Mercy Corps.

“The aim of the course was to introduce small- and medium-scale farmers to a sustainable agriculture approach, or how to produce more with less external inputs, respecting nature and all its elements,” Khawand said. The workshop brought together 17 people, 16 of them women, who grow vegetables, olive trees, citrus and tobacco, the last being the most important product in the south.

“Most of them intensively use random pesticides and chemical fertilizers,” Khawand said. “We cannot know the impact of this activity in the long term, but we see that the participants have started to change their attitude. For example, some are already talking about planting a part of their orchard with a ‘green’ manure and not plowing the land in order to protect the soil and reduce evaporation, while others talk about starting to create their own compost.”

During the workshop, enthusiasm was high among the participants, who commented on schemes and tried diligently to find solutions to problems the SOILS team presented. All of them appeared to have found answers to some practical issues and also ways to implement simple ideas to make life easier.

Zeinab Yassine, a landowner who grows tobacco, beans and tomatoes among other crops, is already thinking about alternative crops, because “tobacco takes too much time for not very much.” She commented, “I learned how to make compost and beds without plowing and a ground cover, and how you size and transplant plants.” She also explained, “I suffer from back problems, and I think I see now how to ease my work.”

The February workshop was just the beginning for SOILS activists. “We would like to work on the digital distribution of some of the resources we found in Arabic, if we get the permission of the authors, so we can dispense valuable agricultural advice and techniques to the farmers interested in permaculture,” Khawand said. “We should also keep in contact with the training participants and follow their evolution. If some of them begin to implement sustainable agriculture on part of their land, we could share their results.”

Information sharing and networking are indeed two cornerstones of the overall project. Said Khawand, “As we work mainly on awareness raising and capacity building, it is difficult to talk about concrete results, but we can see that things are changing already. We have a lot of ideas for the future.”

Khawand believes in the future of permaculture in Lebanon. She remarked, “Lasting changes are slow and start on a smaller scale. Farmers, brainwashed by industrial production methods, will not suddenly adopt the principles of permaculture, but they will follow the example of individuals and start with small changes, such as organic waste composting. The conviction and conversion occur through successful examples.”