The discovery of an ancient architectural structure from the Hasmonean era in Jerusalem, the latest in a series of archaeological findings that connects the Jewish people to the Land of Israel, has become an ideological tool for Minister of Education Naftali Bennett, among others. 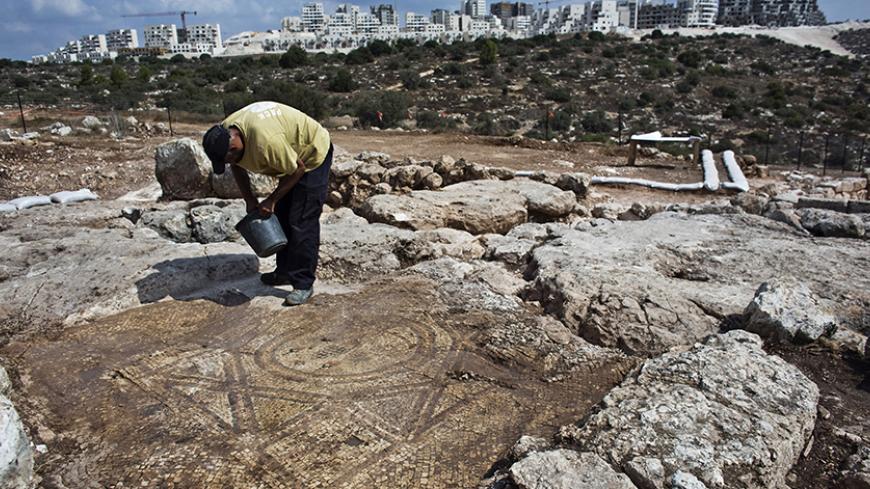 A worker for the Israel Antiquities Authority works at an excavation site where a compound containing an oil press, a wine press and mosaics was exposed near the Israeli town of Beit Shemesh, Sept. 18, 2014. - REUTERS/Nir Elias

The June 16 post that Naftali Bennett, Israel’s minister of education, wrote on both his Hebrew and English Facebook pages couldn’t be more conclusive: “Memo to Mahmoud Abbas and others who scream ‘occupation’: A 3,000 years old jug bearing the inscription Ishba’al son of Beda was recently discovered near Beit Shemesh. Ishba’al is a name mentioned in the Tanach (Bible) and is unique to the period of King David. This is yet another example of the many facts on the ground that tell the story of the Jewish state that flourished here in this land 3,000 years ago. Back then there was communities that collected taxes, had a strong economy, provided transportation, education institutions, a military - just like today. A nation cannot occupy its own land.”

Bennett was talking about an archaeological find from 2012, but researchers from the Israel Antiquities Authority (IAA) finished reassembling it at the beginning of this month.

The kind of behavior exhibited by the minister, where ancient artifacts are at the service of a political belief, is in itself an Israeli archaeological practice. In fact, archaeology in Israel has often been steeped in ideology, where stakeholders use some of the findings in instinctive and emotional ways. The penetration of ideology into the field of archaeology is a hot topic. In the first half of this year alone, several conferences were held on this issue.

The book “Under the Surface,” by the late Shuka Dorfman, who was the head of the IAA for 14 years, was recently published. It describes the connection between archaeology and politics in Israel. “Zionism, like other national movements, has used archaeological science for national ends. The remnants of the past have become tangible evidence for the historical connection between the Jewish people and the Land of Israel, its homeland,” he writes.

“Public interest in archaeology is almost always ideological,” archaeologist Moti Aviam of the Kinneret Institute for Galilean Archaeology at Kinneret College told Al-Monitor. Aviam, along with Lea Mandelzis, the head of the department of communications at the college, organized a conference on this very topic last year.

Aviam claims that Israelis have lost their pure interest in archaeology. He said, “The public reads about 80% less archaeology than in the past. The place of archaeology among the public has waned. Once they called it the ‘national hobby,’ and there was a minister of defense [Moshe Dayan] who looted antiquities.”

Aviam recalls one of the first television programs in Israel anchored by renowned archaeologist and former Minister Yigael Yadin. “The program was titled ‘Breaking the Code’ (literally, ‘Zaphenath-paneah,’ the name given to Joseph by the Egyptians, Genesis 41:45). I watched as a kid with my mouth agape. Now it’s gone. What still exists? When there’s some fantastic finding it appears on the first pages of the big newspapers, and usually it’s connected to the Jews and Judaism and our right to this land. Then everyone wakes up,” he said.

Mandelzis disagrees. “The articles on archaeology draw a lot of interest,” she said. “The audience and the public are involved in interpreting archaeological finds. It’s a very interpretive field, and every reader can express his opinion.”

An article published June 2 by the Israeli news website Mako demonstrates this dichotomy. It criticized Israeli hypocrisy regarding the shock at the destruction of the antiquities of the Syrian city of Palmyra by the Islamic State, while the Israel Defense Forces (IDF) itself “made sure to flatten history,” as the author phrased it. His reference is to the IDF destroying historical sites mainly during the 1948 War of Independence. Most readers of this article were enraged. “It’s shameful that something like this is published,” an anonymous Internet user wrote as a comment to the article on the site.

Archaeology is also suffused with religious, gender and even economic ideology. “Feminist approaches to research will work on the question of the role of goddesses in ancient societies,” said Yonatan Mizrachi, an archaeologist active in the group Emek Shaveh, which deals with the role of archaeology in Israeli society and the Israeli-Palestinian conflict. “Jewish archaeologists will focus more on an early Hebrew inscription or on a synagogue, although it’s not necessarily more important than the church built on top of it. It’s natural. If you’re a Marxist, archaeology will show early agrarian society as a type of collective. I’m not saying it’s right, I’m just saying that interpretation stems from ideology.”

Mizrachi told Al-Monitor, “Archaeology deals with the interpretation of physical findings, but interpretation itself is not an exact science and so comes from ideology: Our identity is a part of the interpretation. Am I Jewish or Arab, a woman or a man, religious or secular? You always have to check the motivation of the researcher. We have a notion that archaeology deals with the past, that we are supposedly telling the story of King David or Julius Caesar or King Herod. But actually, archaeology is done in the present. Its dialogue takes place in the present, with contemporary ideologies and worldviews.”

It’s astonishing how this ideology can be expressed. An archaeological site is dug in layers, and the decision to dig to a certain depth is ideological. Do we want to reach a deeper layer of an earlier society or make do with later findings? Even the date of release of the findings could be ideologically motivated: On Hanukkah 2013, for example, an article was published, “A Hanukkah Miracle: An Archaeological Structure from the Hasmonean City Was Discovered in Jerusalem.”

Did the discovery of the findings from the time of the Hasmoneans really amazingly match the date of the holiday that commemorates their victory? Or perhaps the researchers waited to publish the discovery so as to achieve the full emotional, religious and national effect?

“Archaeology is connected to the Zionist ethos, to identity, to internal tensions in Israel. The destruction of history, or its discovery, is part of the struggle for legitimacy,” said professor Yossi Shain, the chair of the diplomacy program in the political science department at Tel Aviv University. Shain wrote the introduction to Dorfman’s book, where he mentioned one of the most effective ideological tools in Israel: Masada. The Masada archaeological site was uncovered in a dig in the 1960s and has been used for years as the venue for the induction of new IDF recruits. On such ceremonies, the recruits declare, “Masada shall never fall again.” This slogan transforms the Masada story of Jewish rebels opposing the Roman Empire into a symbol of everlasting Jewish resistance.

Despite the ideological manipulations, many believe that Israeli researchers won’t hide findings that are inconvenient. “This isn’t a matter of concealment, but of what people choose to emphasize,” said Mizrachi. “Certain findings are emphasized, and I certainly see situations where some choose not to emphasize other findings.”

“There are archaeologists, some of them good and experienced at their work, for whom nationalist sentiments are most important, while for me they’re a nuance,” said Aviam. “There are people from the political arena who find partners in the field of archaeology and wave around their findings. But concealing findings? I haven’t heard of that happening, and I want to believe that it doesn’t happen.”

But even without reaching such extreme incidents of hiding findings, it is clear that archaeology is being used at times as an effective tool to inflame public spirit. Israelis should be aware of the fact that beyond scientific revelations, archaeology can also carry with it ideological messages manipulated by people with interests.

by Murielle KASPRZAK and Joseph SCHMID | AFP | May 26, 2022
END_OF_DOCUMENT_TOKEN_TO_BE_REPLACED