IS growing in numbers, money

The Islamic State is gaining in influence while those opposing it search in vain for ways to counter the extremist organization. 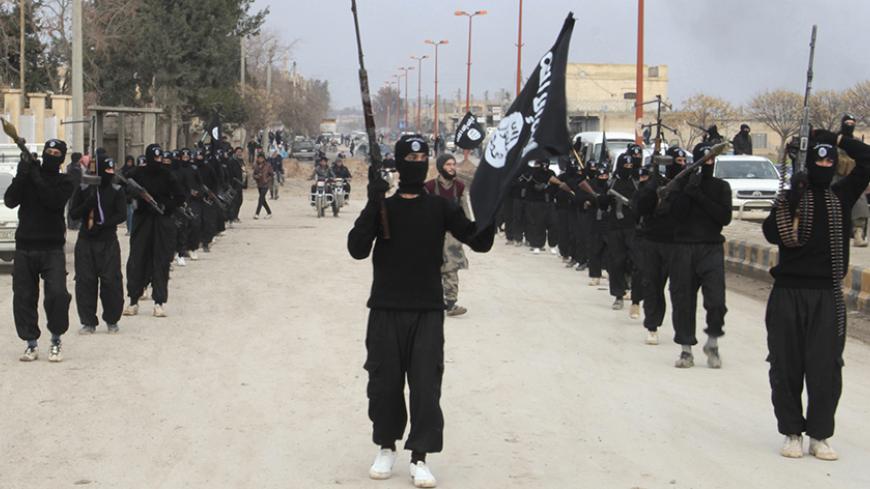 Fighters of the al-Qaeda-linked Islamic State carry their weapons during a parade at the Syrian town of Tell Abyad, near the border with Turkey, Jan. 2, 2014. - REUTERS/Yaser Al-Khodor

The Islamic State (IS) claimed responsibility for the attacks against Shiites in Qatif and Damman, Saudi Arabia, on May 22 and 29, respectively. To date, some 35 armed militant groups are thought to have pledged allegiance to IS around the world, including Ansar al-Sharia in Libya, al-Mourabitoun in Mali and Boko Haram in Nigeria. With more than 25,000 foreign fighters having flocked to Afghanistan, Iraq, Libya, Syria and Yemen, according to UN calculations, gauging IS’ strength has sparked debate among analysts and world powers.

Iraqi military strategist Hisham al-Hashimi told Al-Monitor, “It is not hard for IS to be present in these countries, because, in the case of Saudi Arabia, for example, they go there for the hajj.” He added, “IS is good at branding itself,” asserting that its use of social media is unprecedented.

Martin Ewi, senior researcher for the Institute for Security Studies in South Africa, told Al-Monitor, “The flight of youth to join IS is a global phenomenon. It’s not limited to the Arab world.” He also noted IS sympathizers who choose to stay in their home countries, stating, “IS will support lone-wolf kinds of attacks. Many of these attacks have happened with people who have not had direct contact with IS.” Ewi explained that the group’s influence has benefited from al-Qaeda’s ideology and practices. He remarked that thanks to al-Qaeda's system, “Lone-wolf attacks are the future of terrorism.” Such isolated operations are forcing world leaders to focus on domestic security in addition to fighting IS in Iraq.

Saudi media analyst Jamal Khashoggi told Al-Monitor by phone, “The Ministry of Interior announced the names of 16 individuals who are suspects for assisting in recent attacks.” He said the government is offering nearly $2 million to anyone who provides information resulting in the arrest of those involved. Khashoggi said, “The public is very angry. It is not gaining IS any popularity [here].” He also admitted, however, “We have a problem in Saudi Arabia.”

Hashimi predicts that events in Saudi Arabia will develop in the coming months to reveal IS' strategic pattern. He said, “[IS] starts by targeting minorities, then security forces, then foreigners and journalists, then the princes and king of Saudi Arabia, for example.”

Noting a source of IS' strength, Ewi said that IS' “ideological model is powerful.” He believes it is currently sufficient for IS to induce dedication among younger people and encourage smaller militant factions to align with the group. Hashimi added, “Their force comes from expansion.” In this regard, money has been a driving force behind IS' influential reach and contributes to its staying power.

Hashimi said that IS has distributed up to $6 million a month to groups like Boko Haram and Ansar al-Sharia. In September 2014, the United States began bombing oil installations held by IS, but the group still proved capable of making up to $2 million a week from the occupied facilities.

In June 2014, Iraqi intelligence forces arrested Abu Hajjar, who oversaw IS' finances. According to Hajjar, who was interviewed by Hashimi, before September 2014 the group was exporting “$2 billion in international investments” to Libya, Indonesia, Nigeria, South Africa and Yemen, money that is now being spread among external allied IS branches.

“The increasing number of groups pledging allegiance to IS, I think, is worrisome in Africa,” said Ewi. He said of Boko Haram and groups like it, “The decision to join or to pledge allegiance is actually strategic.” For the smaller armed groups, financial support is crucially important and can help guarantee their survival.

“When Boko Haram joined al-Qaeda, they received money,” Ewi explained. “They also used to receive training. They received strategic support. We’ve seen Boko Haram militants fighting in Iraq. So that means their alliance is very deep.” Ewi added, “They give up their autonomy when they join forces with IS' leadership … They may maintain some structure, tools or ideology, but they give up the command of their group.”

The war against IS is also worrisome in Lebanon, a country often forgotten but on the front lines of the Syrian crisis. Khashoggi said, “Lebanon is connected to Syria. If things go bad in Syria, it will go bad in Lebanon. It has already spilled over.” He puts much of the blame on Hezbollah, which, Khashoggi contends, “has dragged Lebanon more and more into this sectarian war.” In April, shipments of weapons for the Lebanese army began arriving through an arms deal between Saudi Arabia and France worth nearly $3 billion. Riyadh has also urged the Lebanese to elect a president as soon as possible, to help ensure the stability of the country. Lebanese politicians have gone a year without naming a successor to Michel Suleiman, whose term ended in May 2014.

As IS spreads its tentacles globally, some wonder how it can be defeated. Hashimi believes that if IS leader Abu Bakr al-Baghdadi falls in Iraq, the armed factions from Africa and elsewhere will simply return to their activities in their own countries. Ewi sees things differently, asserting, “If the groups are committed, when the leadership of the current [IS] organization is removed, these groups can easily reorganize themselves.” He also believes that the countries challenging the armed rebel groups will “weaken” IS' reach in Africa, but he is uncertain of whether they can defeat them.

Khashoggi stated, “I think what will help [defeat] IS the most is for them to be countered by other Islamist fighters, and that has been happening in Syria.” Khashoggi believes some of these forces are moderate factions that can defeat IS while refraining from becoming another version of the extremist group.

According to Ewi, the South African government is providing support to the South African Islamic Center to help educate and reach out to Muslim communities to counter the spread of extremist ideologies, such as that adopted by IS. In Europe and the United States as well, government officials are concerned about defending their domestic soil and educating the public.

As world powers mull over cultural and military strategies against religious extremism, their focus does not appear to be on eradicating the source of the Islamic State's increasing financial expansion.