A look at the Middle East issues Congress will be addressing the week of June 8. 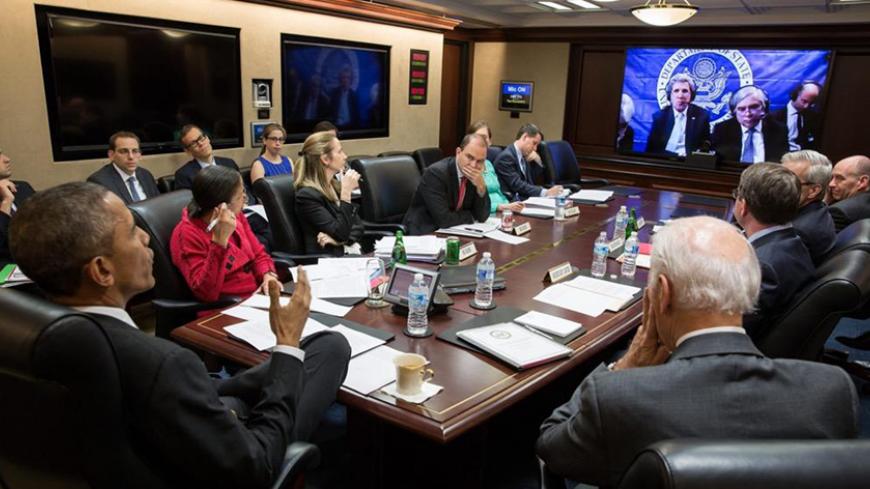 US President Barack Obama (L) receives an update in the Situation Room at the White House in Washington from Secretary of State John Kerry during the Iran nuclear talks in this White House handout photo, April 1, 2015. - REUTERS/White House/Handout

The US Senate may vote to extend Iran sanctions legislation for another decade, potentially complicating the next president's ability to stick to any final nuclear deal. Current law that allows the president to temporarily suspend, but not remove, sanctions legislation expires in 2016. Iran hawk Mark Kirk, R-Ill., has offered an amendment to the annual defense bill that would extend the legislation until 2026.

Kirk has also proposed requiring a report on how Iran has used any funds made available through sanctions relief, out of concern that some of the money may end up in the hands of Hezbollah or the Iranian military. And Sen. Jeff Sessions, R-Ala., has proposed a sense of the Senate that nuclear negotiations with Iran should not continue without the establishment of a robust inspections and verification system that includes access to military facilities and scientists.

The amendments are among a flurry of proposed foreign policy changes to the annual defense authorization bill, which is being voted on on the Senate floor this coming week. The must-pass legislation has attracted hundreds of amendments because of its status as one of the pieces of legislation that is almost guaranteed to make it into law.

Other proposals include efforts to withhold funding for the Iraqi military until it has taken steps to protect the Iranian dissidents at Camp Liberty; declassify evidence of Saudi financing of the 9/11 terror attacks; and recommend that the Barack Obama administration urgently take up Qatar's request for fighter aircraft. Sen. Ben Cardin, D-Md., the top Democrat on the Senate Foreign Relations Committee, has offered an amendment demanding that the State Department offer a report on accountability for war crimes and crimes against humanity in Syria; Cardin's committee is scheduled to mark up that effort on June 9.

The committee is also continuing to hold closed briefings with members of the administration and outside experts to help inform its review of a potential final deal. The June 10 briefing focuses on verification and assessment and the creation of a successful inspection regime.

The House meanwhile may vote on the spending bill for the Department of Defense. The legislation boosts aid to allies such as Jordan.

And the House Foreign Affairs panel on the Middle East holds a hearing on June 10 on "Iran's Enduring Ballistic Missile Threat."

Off Capitol Hill, the US Institute of Peace on June 8 hosts Iraq's parliament Speaker Salim al-Jubouri. The visit comes as the Iraqi parliament is considering legislation on topics such as a Sunni National Guard and a federal court system that are seen as critical in the long-term defeat of the self-proclaimed Islamic State.

And on June 9, the Stimson Center hosts the United Arab Emirates' ambassador to Washington, Yousef Al Otaiba. At his post since 2008, Otaiba has notably played a crucial role in the US-UAE Agreement for Peaceful Civilian Nuclear Energy Cooperation (123 Agreement), which came into force in 2009.