The Iran nuclear talks have been extended until July 7 as the Iranian and US officials present in Vienna express optimism and mutual reassurance. 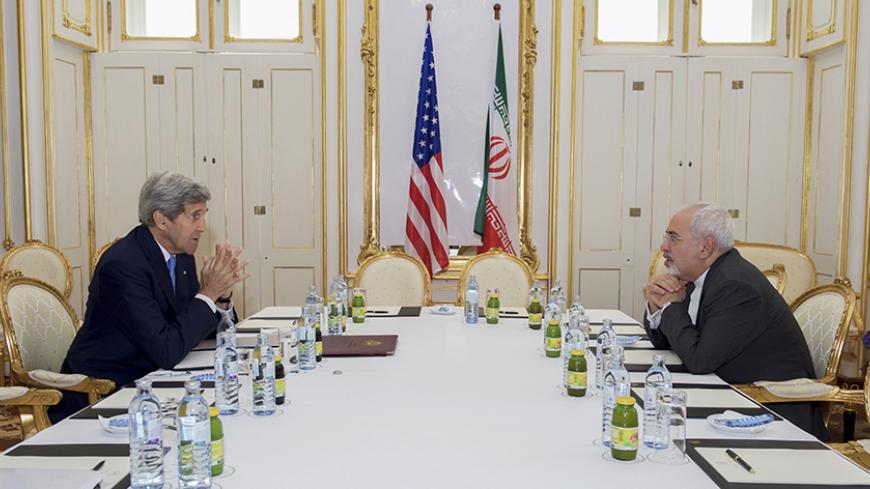 VIENNA — The Iran nuclear negotiations appeared to gather momentum June 30 and were extended until July 7, as Iran’s Foreign Minister Mohammad Javad Zarif rejoined the talks, saying he had a mandate to reach a final deal and he believed they could do it.

Zarif’s consultations in Iran were related to Iran seeking reassurance that sanctions relief in a final deal would actually materialize in exchange for the nuclear commitments that it would make, sources briefed by negotiators told Al-Monitor. In exchange for such reassurances, it was expected that Iranian negotiators would be able to offer more flexibility on nuclear-related issues to be able to conclude the deal.

“I didn’t go to Iran to get a mandate,” Zarif told pool reporters after almost two hours of one-on-one meetings with US Secretary of State John Kerry upon his return from Tehran early Tuesday. “I already had a mandate to negotiate, and I am here to get a final deal and I think we can,” Zarif said.

“We had a good conversation,” Kerry said of his meeting with Zarif, who returned to Vienna from Tehran accompanied by Iran’s atomic energy chief Ali Akbar Salehi as well as Iranian President Hassan Rouhani’s brother, Hossein Fereydoun.

“What is really determining today is what Zarif has brought back with him from Tehran,” Ali Vaez, senior Iran analyst at the International Crisis Group, told Al-Monitor Tuesday. “That will determine if we have the political decisions made today that in one week will be enough to draft the complete agreement that is airtight, watertight and bulletproof.

“My sense is no one wants to leave Vienna without the agreement,” Vaez said. “What they can achieve here in 10 days, they won’t achieve in two months if they leave Vienna.”

Ministers at the talks stressed in comments to Iranian news media Tuesday that if a final nuclear deal is reached, the sanctions relief would bring about meaningful economic benefits that Iranians would experience relatively swiftly.

“We have offered to provide relief for all economic and financial sanctions during the first phase” of a final deal, German Foreign Minister Frank-Walter Steinmeier told Iran’s IRNA in an interview in Vienna Tuesday.

“That will bring about improvements from which Iranians will benefit quickly, especially when it comes to the balance of payments and the exchange rate,” Steinmeier continued. “Our experts have therefore been working around the clock … to create the prerequisites that will enable us to fulfill our part of the agreement punctually and in full when the time comes.”

The Iranians wanted reassurance that sanctions relief in a final deal is as verifiable as the nuclear commitments that Iran is going to accept under the final agreement, a source briefed by negotiators at the talks, speaking not for attribution, told Al-Monitor Tuesday, adding his understanding was that some sort of reassurance was provided.

Analysts said Iranian concerns about sanctions relief are not unfounded. And, they noted, it was in the interest of the six world powers to make sure this agreement is durable and that Iran not feel its expectations for sanctions relief in the final deal were reneged upon so that Iran maintains its commitments under the long-term deal.

“At the end of the day, no one will walk away a true winner unless this deal lasts,” Trita Parsi, president of the National Iranian American Council, told Al-Monitor Tuesday. “It has to last. And that means you have to think through a whole set of eventualities and put into place measures to handle them if they were to arise. Otherwise, if one side feels they got the shorter end of the deal, it will fall apart.”