Professional Palestinian soccer players, especially those in the Gaza Strip, are bound by restrictive contracts and low pay. 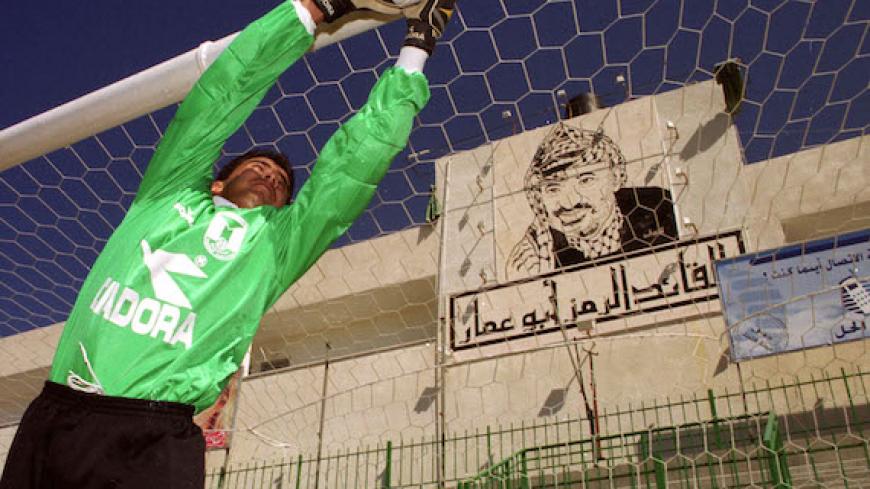 A Palestinian goalkeeper practices fielding shots in a file photo at the Gaza soccer stadium where a large mural of Palestinian President Yasser Arafat hangs behind the goal, March 9, 2001. - REUTERS

RAFAH, Gaza Strip — Basel al-Sabbahin, 27, has been the goalkeeper for Al-Shabab soccer club since 2007. His team has won many championships and he has been awarded several titles, such as best goalkeeper and best player, in local Gaza tournaments.

“Being a player in the club’s soccer team was supposed to be my main job, but the economic situation is extremely bad," he told Al-Monitor. "This is why I began working on a number of small projects, such as investment [projects]. But they always end up failing as a result of the deteriorating economic situation in the country. I am married and have two children; I need a decent income.”

Sabbahin said that he has tried to move to other clubs that offer better financial and professional chances, but Al-Shabab rejected his transfer requests, claiming that it cannot find a goalkeeper as good as he is. “I have been with [Al-Shabab] club since I was a child, and I encountered many problems when I expressed my wish to transfer to another club," he said. "In order for me to play for another club, I will need to be released from my current club. However, it will never happen because my transfer request was rejected several times. The club told me it would approve my request under one [impossible] condition, which was to pay $20,000.”

Sabbahin said he has received many offers to join clubs in the West Bank — which would have marked a major financial and professional step for him — but the impossible conditions imposed by his club in Rafah prevented him from accepting such offers.

Ariir joined the club at the age of 16 and signed a contract, unaware of its content, that prevents his leaving the club. “I cannot leave because I grew up in this club and when I began participating in soccer championships, I signed a contract. … If I request a transfer, I would be told to stay at home. So, transferring to another club is out of the question,” Ariir said.

He added, “We asked the Gaza clubs to examine the possibility of applying the rules, even if partially, by signing contracts for 10 players, with a monthly salary of $300 minimum. However, the clubs did not even agree to look into the rules. They refused to try the rules out to see whether they would work or fail. Only two clubs out of the 12 Gaza first-division clubs accepted [the trial], while the other clubs claimed that they are unable to cover the expenses stipulated in the professional rules.”

Abu Salim said that the federation has never received any complaints from Gaza players of being prohibited from transferring to other clubs. “When an amateur player becomes a professional, he will have financial benefits," he said. "Thus, his club that made him a first division player has the right to benefit as well. However, we never received any complaints from players or clubs. So long as the player continues to play for a club without any problems, we have no right to intervene.”

However, Nabil al-Aawajah, director of the soccer clubs division at the Gaza Ministry of Youth and Sports, said there are many problems when it comes to clubs treating their players well.

“Many players resort to the ministry to complain about clubs treating them as their preserve," he said. "Since there are no professional rules in the Gaza Strip, all players follow the amateur rules. They sign [contracts] with their clubs for an unspecified period of time and thus, they become the clubs’ preserve. This is wrong because the professional rules — which determine the player’s participation in the club according to [game] seasons, after which contracts end — is not applied.”

Aawajah said that the Gaza Strip is home to about 54 clubs that are divided between the first, second and third divisions. However, they all face financial crises since they mainly rely on local and foreign donations, and a portion of governmental funding that has essentially stopped. “Certain clubs depend on personal projects to cover the players’ expenses," he said. "Al-Ahli club in Gaza City, for instance, [has] lands and halls for rent. This is why the majority of the Gaza clubs have limited funds and thus rely on the bonus system, [with bonuses given] to players according to their potential, importance and what he offers to the team.”

An improvement in the Gaza soccer clubs’ economic situation would put an end to the injustice suffered by the players. The clubs should appreciate the players’ skills and give them the privileges they deserve.