The government of Egyptian President Abdel Fattah al-Sisi is adopting a new strategy to minimize exportation activities and exploit Egypt’s wealth locally, despite the negative repercussions these measures could have on the country’s economy. 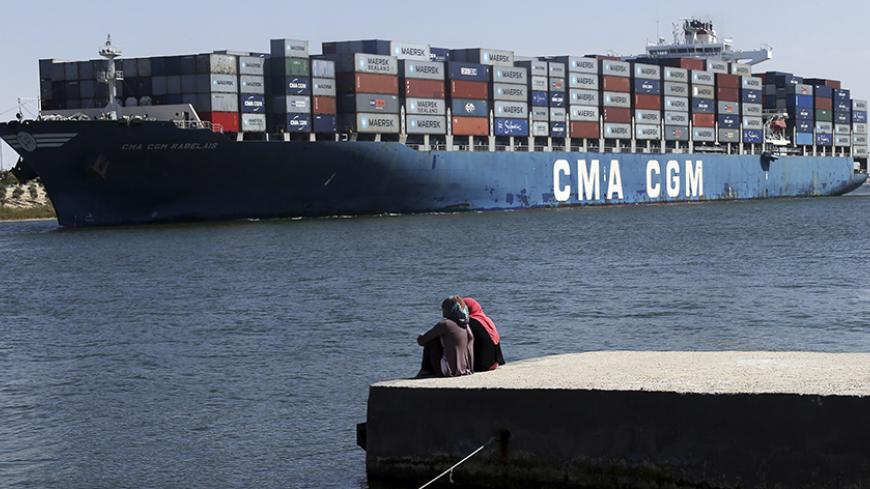 Women sit and watch a container ship navigate through the Suez Canal near the port city of Ismailia, northeast of Cairo, May 2, 2014. - REUTERS/Amr Abdallah Dalsh

CAIRO — The disclosure of the reasons behind the decline in non-petroleum Egyptian exports during the first five months of 2015 by 20% compared to the same period in 2014 is not only dependent upon official statements. Egyptian newspaper El-Watan News quoted Minister of Trade, Industry and Small Industries Mounir Fakhry Abdel Nour on May 2 as saying, “The decline in Egyptian exports is linked to security problems and the fluctuating political situation in the Arab countries.”

Yasser Jaber, spokesman for the ministry, told Al-Monitor that there is a global trade recession, and the relative deterioration in the Gulf Cooperation Council economy, following the fall of world oil prices, has caused them to reduce their imports of Egyptian products.

The Trade Map website, which includes the largest database for international trade, recorded in early 2014 a decline in the importation rates of three Gulf states in 2013. Saudi Arabia saw a decline in imports by 6.75%, while the United Arab Emirates and Oman’s decline stood at 2.92% and 14.7%, respectively. The website also highlighted the decline of Oman’s import rates from Egypt in 2014 by 11.6% compared to 2013. However, the website has yet to display any statistics on the Gulf imports from Egypt, particularly in 2015.

According to Abdel Nour, the political, security and economic vagaries in the Arab countries, including the Gulf, are not the main reason behind the decline in Egyptian exports. This is because the Arab countries are not the top importer from Egypt. Rather, Europe and the United States come first.

Trade Map says that the decline in Egypt exports has been an almost yearly phenomenon since 2012, when the total non-petroleum exports in Egypt were at $21 billion, compared to $22.3 billion in 2011, despite the insecurity at the outset of the Arab Spring in 2011 in most of the Arab countries.

Rihan Mohammed, vice president of the Egyptian International Trade Point, which is a subsector of the Ministry of Trade, Industry and Small Industries, told Al-Monitor that the promotion and transfer of the Egyptian product is deteriorating, due to neglect on the part of the government in state institutions following the January 25 Revolution. Mohammed added that there is a deterioration in the land, sea and air trade transportation lines between Egypt and world countries, which has led to the delayed exportation of Egyptian goods and caused damage to some, particularly food products.

Since late 2014, Egypt has been witnessing a crisis in terms of the availability of natural gas and fuel, upon which the majority of the factories rely. This shortage has obstructed production. Raw materials consist of only 8% of Egypt's exports. The fuel crisis of 2014-15 has hindered factories’ activities, which produce a large part of Egyptian exports. Farag Abdel Fattah, economics professor at the faculty of economics and political science at Cairo University, agreed with Mohammed and Jaber, who considered the decline in factory performance the main reason for the decline in exports. For instance, some fertilizer factories have completely halted their activities at a time when fertilizers are considered Egypt’s most important exports.

On July 16, 2014, the Ministry of Trade, Industry and Small Industries announced a ban on the export of a number of Egyptian raw materials, namely feldspars, quartz, talc and manganese, and imposed 200 Egyptian pounds ($26) per ton on the export of marble and raw granite, and 50 Egyptian pounds ($6.5) per ton of sand exports. An owner of an import-export company in Egypt, who spoke to Al-Monitor on condition of anonymity, described the restrictions as harsh and as having significantly destroyed the export of these raw materials. He pointed out that the new fees consist of a 12.5% ​increase ​on the usual price of raw marble, which pushes many buyers abroad to purchase from other countries such as Turkey, Italy, Spain, Greece, Iran and Portugal.

According to Trade Map, the exportation of Egyptian marble in 2014 declined by 61% compared to 2013, while the exportation of Egyptian raw granite declined by 30% in the same year. Also according to Trade Map, the previously mentioned four raw materials — feldspars, quartz, talc and manganese, the export of which was banned — do not represent a large proportion of the Egyptian exports. The total value of their exports amounted to $17.84 million in 2014, namely 0.09% of the exports.

However, Abdel Fattah told Al-Monitor, “The export ban on granite and marble and the high fees that are being imposed on them could have raised the concerns of the workers in Egypt’s crude exports field that they may not be able to keep their jobs for much longer, as this is considered an indication that the state is leaning toward using raw materials in [local] industry rather than exportation.” It should be noted that the crude exports are expected to be completely banned as per the executive regulations of the new mining law, which was promulgated in December 2014. However, the ban is not limited to minerals only, as the Ministry of Commerce has decided to ban the export of rice as of August 31, 2015.

The executive regulations of the new mining law, issued by President Abdel Fattah al-Sisi in December 2014, will ban the export of mineral ores completely. The Ministry of Trade, Industry and Small Industries has also decided to ban the export of rice as of August 31, 2015.

Abdel Fattah said that the export restrictions on raw materials might be the reason behind the decline in Egyptian exports, although they do not represent the most influential reason. Yet, he is a proponent of both decisions to ban minerals and rice. He said, “Raw materials cannot be wasted on exports. Their use in the manufacturing phase doubles their exportation value.”

Recently, Egyptian import and export companies have experienced a relative deterioration due to the Central Bank of Egypt's decision on February 4, 2015, to restrict deposits in Egyptian banks by individuals and companies to $10,000 per day for a maximum of $50,000 a month. This does not cover the amount that the Egyptian importer must transfer to the foreign exporter. This measure was designed to reduce demand on the dollar in order to reduce its value on the black market. Nevertheless, this has made the import process more difficult.

Abdel Fattah said that the complications of the import process as a result of the restrictions on the deposits in dollars have probably affected the liquidity and earnings of those working in the import sector. This has subsequently affected their export activity, since many of them work in both the import and export fields.

The decline in exports sheds light on the true will of Sisi’s regime to endow Egyptian exports with value by exploiting raw materials in industry instead of exportation. This is especially true despite the threat these measures pose to the Egyptian economy, such as the usual annual decline of exports, the energy crisis and the conflict between the state and the dollar black market.