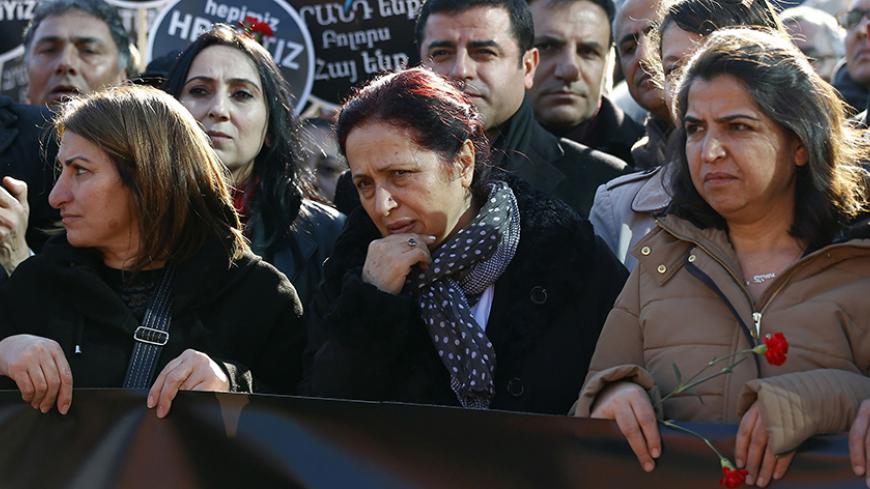 Rakel Dink (C), widow of slain Turkish-Armenian editor Hrant Dink, walks toward the Agos newspaper office during a demonstration to mark the eighth anniversary of his death, in Istanbul, Jan. 19, 2015. - REUTERS/Murad Sezer

Armenian youths in Turkey have launched a protest campaign against the demolition of Camp Armen, the Armenian orphanage that housed hundreds of Armenian children in summer sessions. The Armenian community demands the orphanage be preserved and handed over to it. This does not sound likely, but it is significant as being the first street protest by Turkey's Armenians to express their demands in recent times.

Camp Armen symbolizes the long saga of the deportation and massacres Armenians suffered on Anatolian soil. Its history starts with the purchase of a plot of land by Gedikpasa Armenian Protestant Church from a private party to house Armenian orphans who lived in Anatolia and were labeled as "sword leftovers" by the Armenians. The orphanage camp was built in 1962 by the orphans themselves under supervision of a master builder.

The existence of the orphanage camp, where 1,500 children were housed and educated, was endangered by a decision by the Court of Appeals in 1974, ruling that foreign foundations cannot own immovable property. The state, empowered by the court decision, seized the orphanage in 1986 and returned the property to its original owner free of charge, including the buildings on it.

The owner couldn’t cope with the implications of owning an orphanage camp and immediately resold it. The new owners, once they found out the background of the orphanage camp, also sold the property without touching it. The property remained abandoned, untouched for a while. In 2008, the Aydinlar family, one of the richest families in Turkey, bought the property and this year decided to build on the lot.

This is why on the morning of May 6, bulldozers approached walls built with the hands of the camp's orphans. Armenians, when informed of the demolition, rushed to the scene and stopped the bulldozers from razing the structure. Armenian activist Garo Paylan found the new owners and requested they postpone the demolition until after the June 7 general elections. The new owners agreed.

At the moment, a part of Camp Armen is crumbling, but most of it is still standing. It has become the symbol of a new Armenian attitude. Since May 6, Armenians have been standing guard around the clock in front of the building. This can well be interpreted as a first such move in the recent history of Armenians in Turkey.

The protests and posting of Armenian guards led to some colorful displays. A huge banner that says “Camp Armen should be returned to the Armenian people” was hung on the building. Armenian musicians showed up to play music.

Rakel Dink, the wife of Hrant Dink, the slain editor-in-chief of the Armenian newspaper Agos that has an important place for Turkey’s Armenians, is one of the ardent supporters of the protest. Hrant and Rakel Dink attended the camp; during the discussions that took place in front of the building, Rakel Dink told the youths standing guard about their days in the orphanage camp.

The goal of the protest is to restore Camp Armen to its original status. They have started an Armenian Workshop. Ani Balikci, the mother of Armenian Sevag Balikci, who was killed by another soldier on April 24, 2011, while he was doing his national service, is giving Armenian lessons. They are planting trees and watching documentaries. Political parties, civil society organizations, university students and activists frequently visit the Armenian protesters to express solidarity.

Garo Paylan, an Armenian activist and a candidate for the pro-Kurdish People's Democracy Party in the June 7 elections, told Al-Monitor, “This place was seized by an action of the state. We want it returned but I don’t think the state can do it just like that. We had thousands of properties confiscated like this. If the state returns Camp Armen, then it will have to return the others.”

From what Paylan said, we understand that the return of the orphanage camp to Armenians is not likely. But the fact that it encouraged Armenians to take to the streets to demand their rights vocally and visibly is important. The Armenian community, which until now has refrained from taking a position against injustice and unfairness, is perhaps showing that its traditional reticence is a thing of the past and that the community is becoming politicized.

Paylan said that in recent history there has been no such public protest apart from the funeral of Hrant Dink. He said, "The fact is the Armenian community is becoming truly politicized after [the killing of] Hrant Dink. There are now more Armenian actors who are more sensitive. They have orators and spokesmen. But their pigeon jitters still prevail. [Hrant Dink used to define Armenian fears as ‘pigeon jitters.’] That fear is still there, but alongside politicized people. We now have people and actors of divergent views who are active in various political parties, indicating that our community is increasingly politicized and ready to react to unfair practices.”