Over the past few years, young ultra-Orthodox Jews have been entering academia in large numbers, a phenomenon that is transforming the ultra-Orthodox community and its relations with Israeli society at large. 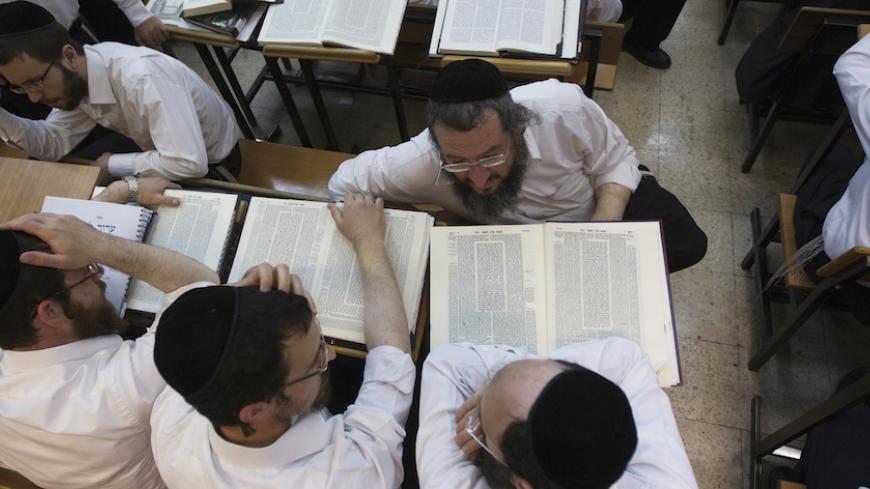 The past few years have seen a dramatic change in ultra-Orthodox society. At one point, it was a society that shut itself off behind the ghetto’s walls, keeping a safe distance from everything the Western world had to offer and reacting with suspicion at the slightest hint of innovation and openness. In that vein, it was especially wary of the academic world, which it considered untouchable. Today, however, increasing numbers of ultra-Orthodox Jews are obtaining academic degrees and joining the workforce. That is one reason why the ultra-Orthodox Yahadut HaTorah party included, for the first time, a demand in its coalition agreement with the Likud that the government take steps to prevent discrimination against the ultra-Orthodox in the public sector.

According to Gilad Malach, head of the Ultra-Orthodox Program at the Israel Institute for Democracy, some 20% of men and women in the ultra-Orthodox community between the ages of 25 and 39 are studying toward an academic degree or had an academic degree as of 2014. “We’re talking about a significant increase,” he said in a conversation with Al-Monitor. “The number grew from 1,050 students in 2003 to 8,300 students in 2014. That’s an eightfold increase.”

The ultra-Orthodox sector’s entry into academia, especially given the speed and intensity with which it is occurring, is undoubtedly a formative social event for Israeli society in general and ultra-Orthodox society in particular. These two societies, so alienated from each other in day-to-day life, frequently rub shoulders in the halls of academia. This has a positive impact on the way the two societies view each other and also tests their ability to bridge the social and cultural differences between them.

“We have identified a change in attitude toward the ultra-Orthodox sector as a result of their integration into academia,” said Malach. “The interpersonal encounter results in mutual fissures in long-established negative stigmas.”

Yoel Groman, a doctoral candidate in mathematics from the Hebrew University, lives in the ultra-Orthodox bastion of Meah Shearim in Jerusalem. He agrees this exposure is driving changes in attitudes. “I get the impression that Israeli society is very accepting of this integration,” he told Al-Monitor.

Along with positive phenomena, however, there are several problems that threaten to make this encounter problematic for both groups. One of these is segregation by gender. “This topic is taboo for both sides. Israeli society will not accept gender segregation, and the ultra-Orthodox will not accept mixed studies,” said Rabbi Bezalel Cohen, head of the Chochmei Lev ultra-Orthodox yeshiva high school in Jerusalem. Cohen has spent years working on the integration of young ultra-Orthodox Jews into the workforce and academia. He noted, “The debate over gender segregation has already reached the Supreme Court. There is no doubt that we are racing toward a clash over this issue.”

At the same time, there is full agreement that what lies behind the movement out of the ghetto is the desire to earn a decent living, not some longing by the ultra-Orthodox community to integrate into Israeli society or even to have an impact on it. “Entering academia is undoubtedly part of the process by which the ultra-Orthodox return to the world of work,” Cohen stated. “But unlike the work world they left in the 1970s, the world of work in the 2000s demands an academic degree. That is why the ultra-Orthodox don’t study the humanities. They study fields like engineering, law and business administration.”

According to Malach, the reason the ultra-Orthodox leadership has not vociferously opposed such integration is that contemporary academia is so different from academia in the 18th century, which gave rise to the Enlightenment movement and threatened ultra-Orthodoxy. “Unlike the German model, for instance, as expressed in the academia of the Enlightenment, which attempted to transform students through what was called Bildung [the German tradition of self-cultivation], or the shaping of a modern, enlightened individual, much of contemporary academics is essentially high-level job training. That is why it does not pose a threat to ultra-Orthodox identity.”

Groman stated, “Entering academia certainly changed me. Today I feel much more independent. I think less about what people will say about me in the ultra-Orthodox community. I do what I believe in. Today there is also another world to which I belong, even though most of my friends are people I grew up with and not people from academia.” He thinks that academia changes not only the individual but the group. “The fact that there are many people in the sector today who want to see changes is something new. While it is true that they are a minority, that group is not much smaller than the minority, which dictates ultra-Orthodox norms today. Most people are situated in the middle and act in a herd-like manner. Once the group asking for change grows larger, it could certainly change the ultra-Orthodox sector.”

“The big challenge,” as Cohen sees it, “still stands before us.” The questions for the ultra-Orthodox will get more difficult once they begin integrating into fields in direct conflict with religious worldviews, such as natural sciences, history, and Jewish philosophy. “The ultra-Orthodox student will be exposed to positions that are completely different from what he knows, and that could shake his whole world. It is not a simple challenge at all, and I certainly understand the reservations that certain rabbis have about academic studies.”

There is reason to believe that what might begin as a desire to earn a respectable living will develop into a desire to improve one’s social standing, to acquire independence and to attain self-fulfillment. Once that happens, internal opposition to academia from the ultra-Orthodox leadership is likely to increase significantly, but by then it might be too late. There will be too many ultra-Orthodox academics for the leadership to stop them. On the other hand, the phenomenon could get out of control beyond the confines of the ultra-Orthodox world as well. A large number of ultra-Orthodox academics could transform Israeli academia in general in ways too early to predict.