The precedents of Ministers Gilad Erdan and Zeev Elkin receiving the portfolios they were after encourage Likud central committee members, who seek to weaken Prime Minister Benjamin Netanyahu's hold on the party. 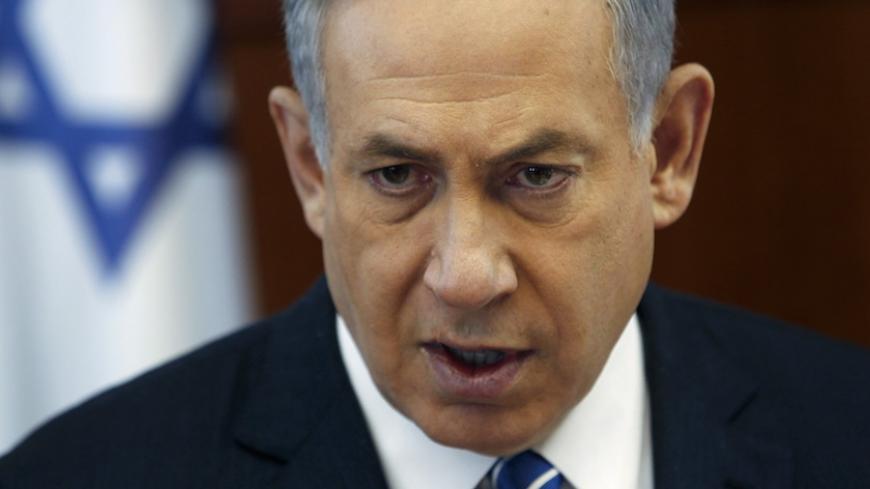 With every passing day since Israeli Prime Minister Benjamin Netanyahu’s impressive election victory on March 17, the extent of the blackmail attempts from within his own party, of all places, appears to grow. Just this week, Netanyahu managed to resolve the Gilad Erdan crisis (related to the ministerial portfolio allocated to Erdan) by appointing him to the government on May 25, all the while being blackmailed by Minister of Immigrant Absorption Zeev Elkin and having to hand him the Jerusalem Affairs portfolio. And now another storm is brewing on the home front. That’s the way things are with a government of 61 Knesset seats (out of 120) and zero room for maneuver, under daily threat by each and every coalition member.

At stake now is an initiative to hand back to members of the Likud central committee the power to pick the party’s Knesset members. The committee is scheduled to convene in about two weeks to discuss and vote in a secret ballot on a proposal spearheaded by Knesset member David Amsalem — a proposal that for Netanyahu is nothing short of a nightmare. Netanyahu believes the Likud central committee is a form of electoral terror, and in light of his intention to compete once again in the next party elections over the head of the Likud position, he has started shoring up his defenses in recent days.

The Likud central committee was for years a symbol of corruption and political decay, and was one of the causes for the party’s 2006 downfall. But since 2006, with a mixture of guile and tricks, Netanyahu has managed to convince the committee members to agree to primary elections in which all party members vote.

At the time, with the Likud on the verge of collapse after the breakaway of the Kadima Party in 2005 and polls giving it only 10 Knesset seats, Netanyahu showed them polls indicating the Likud could get back four or more seats if its Knesset members were chosen in primaries. Since then, every so often, he is forced to physically stop the wheel from being turned back. But now, just when he is supposedly at his political zenith, Netanyahu has had to launch a campaign entreating members of the central committee to head off the move by Knesset member Amsalem.

On the other hand, the central committee members are feeling cocky and unbeatable after the surprising election victory that handed the party 30 Knesset seats, and they have identified an opportunity to ride the tide and go back to the days when every committee member was king. Netanyahu hears their voices and sees a clear and imminent danger — something that could prevent him from being re-elected prime minister.

Already at the Likud Knesset faction meeting on May 25, Netanyahu launched his defensive action. He told the lawmakers that “it’s no secret that our movement suffered for years from the negative brand of the Likud central committee, which was usually unjustified. In the future, too, our rivals will try to use this branding to hurt us in the elections. With this system [of primaries] it will be easier for us to reach the target I am setting for the Likud in the next elections: 40 seats.''

To Netanyahu’s surprise, all the senior party members signed on, whether by nodding their heads or not saying a thing. Some of them still remember the days of “pavillion 28” (where the committee used to convene to pick the Knesset members) and the “sausage center” (where candidates handed out sausages to committee members to enhance their prospects), which corrupted the party and led some of those involved to police interrogation rooms.

The system whereby 3,000 central committee members chose the party candidates for the Knesset turned the elected lawmakers into pawns in the hands of politico power centers and lobby groups. None of the senior legislators miss the daily and Sisyphean courting of central committee members, the constant awareness of the need to please and respond to every whim of every committee member. Nonetheless, none of them took a forward stand on the battle front so as not to seem to be challenging them — after all, these are still members of a strong and influential body.

Netanyahu’s problem is not the senior ministers comfortably ensconced in their offices and enjoying the perks of power and office after successfully blackmailing him into giving them more and more positions and authority. They do not miss the long nights making the rounds at weddings, bar mitzvahs and mezuzah installation ceremonies in an effort to please each and every central committee member.

Netanyahu’s problem are the new Knesset members such as Amsalem, who is connected to central committee members from Jerusalem; Knesset member Jackie Levy, who enjoys a certain amount of control over committee members in the north; and Knesset member David Bitan — all veteran party operatives. They have identified Netanyahu’s distress and are extorting him without batting an eyelid. All are Knesset freshmen, but each sees himself as a candidate for the job of deputy minister, at least.

Netanyahu understands that despite his major election win, he has no leverage over them. That’s why the blackmailing continues, and some of the Knesset members will be appointed deputy ministers and Knesset committee heads next week. This is the only way for Netanyahu to buy himself a modicum of calm in the coalition. Netanyahu believes that the calmer the backbenchers, the less motivated they will be to harm him.

It’s somewhat hard to believe, but only 2½ months after the elections, Netanyahu is up to his neck in the internal party politics that he so despises. While managing the FIFA crisis on May 28 — over the Palestinian bid to suspend Israel from FIFA — and conducting discussions on defense issues, he also spent long hours talking on the phone to central committee members. This will be his lot for the next two weeks. On May 31, for instance, he will host at his home central Likud figures and heads of the party central committee in an effort to persuade them to oppose a change in the system. He will explain to them that backing the change means bringing down the Likud in the next elections. In addition, he will hold additional meetings in the coming days.

At the same time, the chairman of the Likud central committee, Science Minister Danny Danon, who wrested his Cabinet job from Netanyahu through a battle of wits, is trying to forge a compromise proposal according to which only district representatives will be picked by the central committee and all the rest in open primary elections. Speaking to Al-Monitor, Danon said a confrontational stand vis-a-vis the prime minister is bad for the party. Wars will tear it apart and a compromise is preferable.

But in this case, it is not at all certain that Netanyahu will accept a compromise, and he is expected to eventually overcome the obstacle. But this saga only highlights the prime minister’s true standing, as someone who despite having gotten 30 Knesset seats is greatly weakened politically and forced to buy his survival by giving in to the whims of every last Likud Knesset member, who, ironically, all made their way to the Knesset on his back. In such a climate, senior Likud figures believe, Netanyahu has to expand the government, otherwise the way to early elections will be shorter than ever.