After nine years, the Israeli Supreme Court is expected to decide whether the Israeli minister of interior has the right to deport a bona fide permanent resident of the city of Jerusalem. 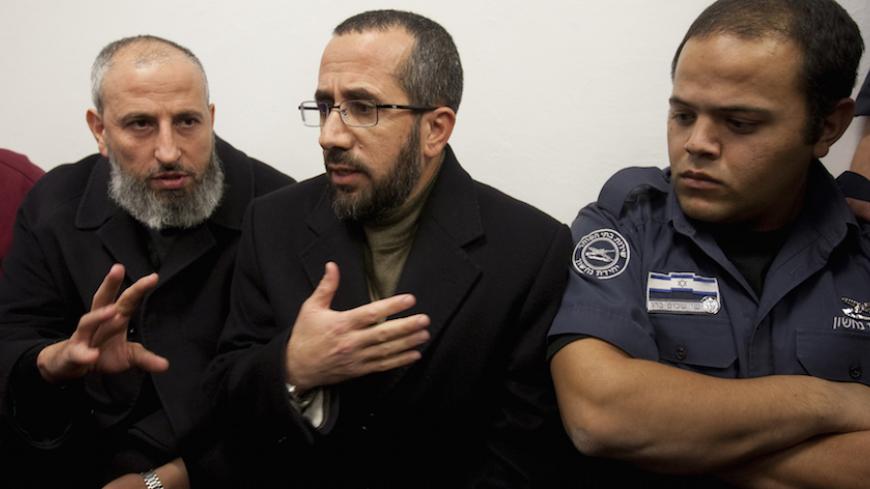 For nine years, former Palestinian Minister for Jerusalem Affairs Khaled Abu Arafeh and elected members of the Palestinian Legislative Council Ahmad Ottwan, Mohammed Totah and Mohammad Abu Tier have been waiting for a decision from the Israeli Supreme Court.

Shortly after the 2006 Palestinian legislative elections, the four Jerusalem residents were banned from entering their city of birth and residency. Their crime, according to arguments by the Israeli prosecutor, is that by participating in elections on behalf of a pro-Hamas list, they showed that they are “not loyal to the State of Israel.” The same applies to Abu Arafeh, who was not elected but was asked to join the government of Prime Minister Ismail Haniyeh.

The 2006 elections were allowed to take place by the State of Israel. East Jerusalemites voted and international observers, including former US President Jimmy Carter, participated in a monitoring role.

There was a sweeping victory by the Islamists Change and Reform List — the pro-Hamas list — which won 76 out of the 132 legislative council seats, allowing the head of the list, Haniyeh, to become the fifth prime minister of the Palestinian Authority government.

In an interview, Abu Arafeh told Al-Monitor that one month after the formation of the government, the four men were ordered by Israel to resign from their posts or be deported. They refused. Abu Arafeh said that this offer is apparently no longer on the table. “They have not repeated it, nor has it been mentioned by the Israeli government representative in the court hearing,” he said. Abu Arafeh himself is no longer a minister in the Palestinian government, yet continues to be banned — along with the three others, all elected parliament members — from entering Jerusalem. His imprisonment and the later Hamas takeover in Gaza meant that Abu Arafeh was de facto no longer a minister in the Ramallah government.

It has been nine long years. ​No alternative has been given to the four, leaving them permanently restricted to Ramallah. Abu Arafeh said that shortly after the deportation order was enforced, the Swiss ambassador to Israel attempted to intervene to allow Abu Arafeh and his colleagues to stay in Jerusalem until the case is heard. But despite the promises of Israeli Minister of Interior Eli Shai, the ambassador's efforts were unsuccessful.

Since the 2006 elections, the four have been arrested three times. Abu Tier is still serving a prison term for his support of the Islamic movement. After having completed their prison terms, the other three held a solidarity protest against their deportation in the International Committee for the Red Cross in East Jerusalem starting July 2010. The protest ended 18 months later, when Israeli troops raided the location and arrested the protesting parliament members and former minister on Jan. 27, 2012.

The political nature of this case has been clear from day one, clearly working to widen the authority of the Israeli minister of interior regarding Palestinian residents of Jerusalem. Abu Arafeh noted that his lawyers asked the court to define the term “loyal to Israel” and decide whether any of the Palestinian residents of Jerusalem were loyal to Israel.

Israel annexed East Jerusalem in 1967 and has given permanent residency and social benefits but not citizenship to East Jerusalemites. Some have applied for and gained citizenship, although it is not automatic or guaranteed. The citizenship law clearly grants the minister of interior the right to award or deny citizenship and sets up criteria for it, but makes no mention of negating permanent residency. Abu Arafeh said in the interview that this is what the Israeli interior minister is trying to claim, with no substantiation.

Over the years, the case of the Jerusalemites has received international attention. Robert Serry, the UN special coordinator for the Middle East peace process, said that he was "worried" about the "potential precedent" that the trial set. Speaking to the French News Agency on Dec. 8, 2010, Serry promised to personally raise the issue with the Israeli government, saying, "This case and that of three other lawmakers currently facing court proceedings continue to raise serious human rights concerns regarding Palestinian residency rights in East Jerusalem."

Speaking from his temporary home in Ramallah, Abu Arafeh said that he has been unable to move or attend important family events taking place in Jerusalem or elsewhere. He said, “My son is graduating from university this summer in Jordan and my daughter will graduate from high school in Jerusalem’s Beit Hanina neighborhood, and I doubt I will be able to attend.”

The Israeli high court held what it said was its last session on the case May 5. Fadi Qawasmeh, a lawyer for the Jerusalemites, told Palestine TV on May 8 that the case has been expanded to allow nine judges rule on it together on account of its importance. “The judges told the Israeli prosecutor that the case is causing a problem for the judged and that there is no clear legal basis for the deportation,” he said.

Qawasmeh said that the judges were very clear in their conversation with the prosecutor about the fact that if no solution is found — meaning the possible withdrawal of the deportation order — that a ruling will not be to their liking. “I expect that the decision of the court will rule that the minister has no right to deport the Jerusalemites, because the judge told the prosecutor: Please tell your superiors to find a solution because their decision will have negative results for the government,” Qawasmeh said.

Abu Arafeh said that if the Israeli Supreme Court fails to redeem the Jerusalemites' right to their birthplace, other protest steps will be taken. “We will not stop our efforts and struggle to accomplish our natural right of living in our city of birth, which we have lived in all our lives,” he said. Abu Arafeh sounded critical of the lack of interest by the Palestinian leadership in their case, saying, “We have met the president twice and he, along with his advisers, have promised to support us, but they have not paid any attention to our case.”

Abu Arafeh realizes that the Palestinian government in Ramallah is not allowed by Israel to interfere in this case. “But this doesn’t stop them from speaking out publicly or pleading our case in the various international forums that they speak in,” he said.

The overreaching of the Israeli minister of interior is being watched carefully by the more than 300,000 Palestinians of East Jerusalem, who worry that if the ministry is given expanded rights, it will affect their own residency in the holy city.