Revitalizing Iraq's ports, airways in the shadow of IS

In an interview with Al-Monitor, Transport Minister Baqir Jabr al-Zubeidi elaborates on his ministry’s commitment to overcoming the budget deficit amid the country’s troubled security situation. 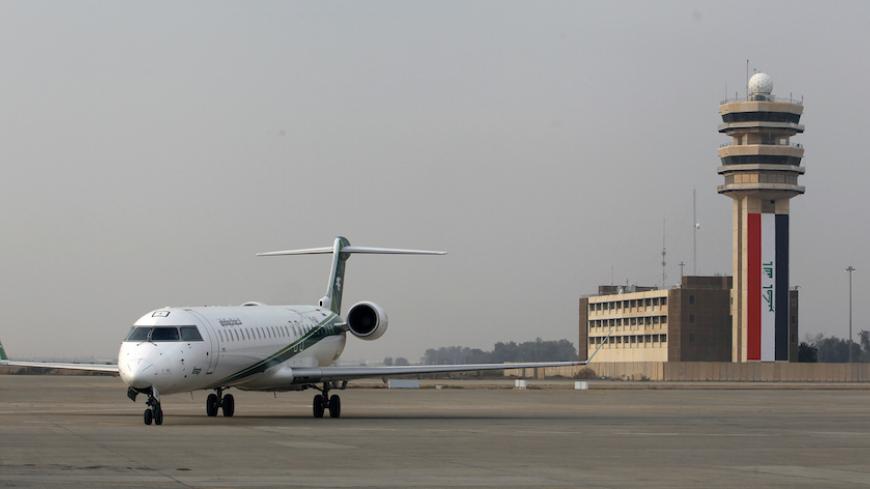 The war against terrorism and a decrease in oil prices resulted in Iraq running a deficit in its 2015 budget. This has been accompanied by tensions in Iraq and neighboring countries due to military operations against the Islamic State. The current environment has not, however, stopped the Ministry of Transport from moving forward on implementing planned projects.

In an interview with Al-Monitor, Transport Minister Baqir Jabr al-Zubeidi (also known as Bayan Jabr Solagh) said that the best way to overcome Iraq's exceptional circumstances is to develop plans that are both realistic as well as sound. While conditions pose significant economic challenges and prohibit certain development projects, Zubeidi asserted that growth should not come to a halt, even amid the toughest challenges. Rather, exceptional conditions impose different approaches to planning and action. Zubeidi's ministry is continuing to complete major projects in the transportation sector, adopting special mechanisms and strategies to overcome the budget deficit and the unstable security situation.

Al-Monitor:  What are the Ministry of Transport's strategies, and what are its priorities?

Zubeidi:  It is well known that the Ministry of Transport has huge requirements given its large projects. Coincidentally, the country has suffered a budget deficit and exceptional security conditions, which make the situation even more difficult. Practical and realistic plans have facilitated our tasks and allowed us to properly manage the ministry’s agenda. Our priorities are the completion of planned projects and finding other ways and means to overcome the budget deficit.

Al-Monitor:  What do you mean by "other ways and means"?

Zubeidi:  Investments and joint investments. The ministry never hesitated to put its projects out to tender for foreign companies, and this proved to be a great success. But the investment process is not easy. It is a double-edged sword if not properly handled. The Ministry of Transport’s projects are huge and expensive projects, and any mistake in retaining the right company or adopting an inappropriate plan might be disastrous.

Al-Monitor:  You said that this proved to be a success. How so? What have you accomplished so far?

Zubeidi:  In terms of air transport, we started improving the work of Iraqi Airways by introducing fundamental changes in the management of the airline and developing plans for the construction of new civilian airports in a number of Iraqi provinces. In the area of ​​land transport, we developed plans for opening up numerous new train stations in different parts of Iraq, and we signed joint agreements with neighboring countries for extending railway lines, and these are some of the important strategic projects that will see the light in the future. In terms of maritime transport, the ministry’s works are continuing through the development of ports and the construction of new ones. A few days ago, we launched projects for the construction of new railways linking some Iraqi provinces and some neighboring countries.

Al-Monitor:  What about funding? How will these projects be financed? Doesn’t investment require money?

Zubeidi:  Yes, it definitely requires money. We invest the available funds. We attract international financial investments and cutting-edge technology. We rely for some projects on the deferred payment method. We have concluded strategic agreements on the completion of important projects according to the deferred payment method that is subject to minimal interest rates. This allows us to overcome the lack of financial allocations.

Al-Monitor:  Iraqi Airways is obsolete, and its airplanes are few in number and old to the extent that Iraqis even criticize some of them, describing them as flying buses. Airports have fallen into disuse and are neglected. What is the role of the ministry? Are there practical and realistic achievements or is the ministry’s work limited to long-term plans?

Zubeidi:  There are practical achievements. First, to make things clear, I took over the ministry less than a year ago. Despite this short period, the ministry has seriously strived to develop the air transport sector, and we accomplished outstanding achievements.

Al-Monitor:  Are there examples of such achievements?

Zubeidi:  Yes, definitely. There is more than one branch, and this is a huge sector. Developing this sector requires the development of its infrastructure, the development of its work mechanisms and the development of prospects as well. In terms of airlines, the aircraft fleet has been developed. The ministry obtained a series of US Boeing planes under a contract for the provision of 55 aircraft. We will also be receiving Airbus and Canadian Bombardier planes. The current fleet consists of 28 aircraft, and by the end of the year it will include 40 aircraft. On the other hand, we continue to reach new destinations, such as Antalya, Vienna and Malmo and Paris soon, as well as Tunisia and Sharm el-Sheikh and one US airport. We have developed a supply center through investment.

Zubeidi:  Baghdad will once again be the hub for aircraft maintenance after having had this role assumed by other countries. We will keep working on this important project.

Al-Monitor:  ​The ministry has numerous projects and plans. But how does the ministry evaluate the importance of a project? In other words, what are the projects you are interested in and to which you give priority?

Zubeidi:  In general, all the ministry of transport’s projects are important. The ministry’s projects not only aim to solve the transportation crisis, but are also of economic importance and feasibility. Some of these projects have an impact on the country's overall economy. This is what gives a project its priority. The projects that improve transportation in a given sector and that have economic feasibility in the long run have priority. These include port projects. We focused in the past six months, through field visits and tours, on the development of the northern and southern Umm Qasr ports and Khor Abdullah and al-Maqal ports, and we received bids from Iraqi and international companies to develop and operate the ports.

There is also the river taxi project. This project is not a mere transportation project. It has an urban dimension. Tens of centuries ago, Iraqis were using rivers for transportation. Our ancestors used watercraft, boats, catamarans and so on. … and here we are in the 21st century, unable to take advantage of important rivers. This project brings back Baghdad's prestige and proper image.

Al-Monitor:  The river taxi project does not seem as successful as you are saying. It was originally a faltering project, and does not quite fulfill the purpose for which it was established.

Zubeidi:  That is right. The project does not exactly achieve what I had hoped for, and the Ministry of Transport’s aspirations go beyond this. The reason why the project has not kicked off as we wanted is the exceptional situation in the country. There are many problems and obstacles, most notably the security problem and poor [resource] allocations. But the project can be improved, and that is what we are working on. We successfully implemented [something similar] in Basra, and now we are trying to implement it in Maysan and Wasit.

Al-Monitor:  ​Basra seems to have a share in all projects. What is the secret behind all the interest given to Basra?

Zubeidi:  ​Basra is the only water port in Iraq. Iraq’s ports and marine docks are all located in Basra, and our rivers flow into Basra, a city that meets all the conditions to be an economic capital. The project there was tendered a long time ago, and the Ministry of Transport is making great efforts to ensure its success since it will give the country important economic returns. Another reason for the interest in the city of Basra is that it still suffers in the aftermath of the Iran-Iraq War. There is a large number of ships and other remnants of war in the Shatt al-Arab. We have begun to exert intensive efforts to remove them, and the General Company for Ports of Iraq, affiliated to the Ministry of Transport, has successfully removed more than 79 pieces of sunken ships and warships, and efforts are still ongoing and continuous in this field.